Linda Sarsour In Louisville: The Leftist/Islamic Alliance in Action

The Washington Standard / September 27, 2020
Sharia-adherent leftist activist and former Women’s March leader Linda Sarsour tweeted Wednesday: “Justice has NOT been served. Rise UP. All across this country. Everywhere. Rise up for #BreonnaTaylor.” She meant it: yesterday evening Sarsour, who was bounced from the Women’s March leadership because of her anti-Semitism, was spotted in video from Louisville, walking …
Read More

The Washington Standard / February 26, 2020
The Qur’an depicts the Jews as inveterately evil and bent on destroying the well-being of the Muslims. They are the strongest of all people in enmity toward the Muslims (5:82); they fabricate things and falsely ascribe them to Allah (2:79; 3:75, 3:181); they claim that Allah’s power is limited (5:64); …
Read More

The Washington Standard / January 1, 2020
Feminism now encompasses Sharia oppression and sexual harassment. Elle magazine last week published a list of “20 Women of Color in Politics to Watch in 2020.” Elle has faced a backlash for including the vehemently anti-Semitic Leftist activist Linda Sarsour, who is the palest “woman of color” since Rachel Dolezal, on the list. But no one seems to have …
Read More

The Washington Standard / February 12, 2019
By American standards, Domineque Hakim Marcelle Ray was a monster. But by the standards of Mohammed, who raped and killed countless people, Ray was a moderate. So why wouldn’t Linda Sarsour fundraise for this monster?
Read More

Linda Sarsour: “My beloved Prophet Muhammad was an activist. He was a human rights activist.”

The Washington Standard / December 27, 2018
The Chicago Women’s March two year anniversary event has been canceled following the allegations of Jew-hatred that have rocked the movement and several of its key members, including Linda Sarsour and Tamika Mallory.
Read More

The Washington Standard / November 28, 2018
The campaign — named “Muslims Unite to Repair Jewish Cemetery” — had raised $162,468 through the Muslim crowdfunding site LaunchGood, far beyond its set goal of $20,000. But only 30% of the proceeds were disbursed, while designated cemeteries pleaded for promised funds. Their calls were met with deafening silence.
Read More

The Washington Standard / November 4, 2018
Linda Sarsour has called for jihad against President Trump, as well as for the slaughter of Jewish families. She recently warned against “humanizing” Jews. She avidly supports the Boycott, Divestment & Sanctions (BDS) movement, an economic boycott of the tiny Jewish state, which mirrors the Nazi boycott of Jewish businesses in the lead-up to the Holocaust. Preceding Kristallnacht, the Nazis held several days calling for Germans to boycott Jewish-owned businesses. BDS is no different.
Read More 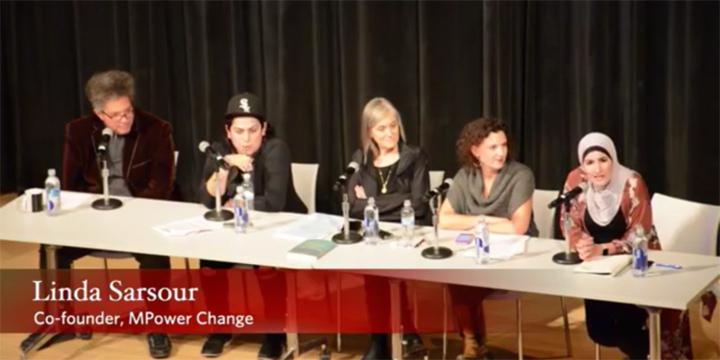 Linda Sarsour: “Humanizing” Israelis “Is Not The Position Of Muslim American Community”

The Washington Standard / September 5, 2018
This is the bigot that the Democrats have embraced. While we get lectures from the Dems about violent racism, they’re once again flirting with genocide.
Read More

Linda Sarsour: “Humanizing” Israelis “Is Not The Position Of Muslim American Community”