Here’s your Deep State people.   They are still in our government and have not been drained one bit under President Trump, though he promised it, and he still wants your vote in November to “drain the swamp,” which he continues to fill.  Yet, the CIA/Mossad created jihadis of al Qaeda are now urging the alleged “oppressed masses” to rise up “against the rulers occupying the White House” in a new propaganda message.

Jihadology provides the message in Arabic and English.

Below are screenshots of the message. 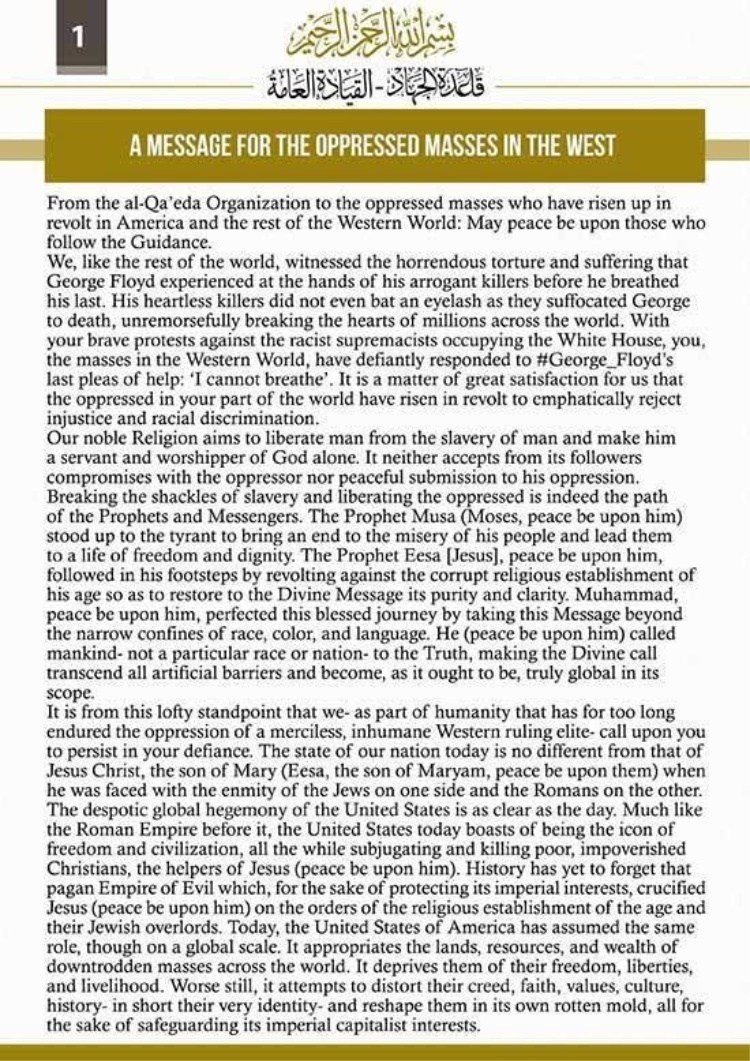 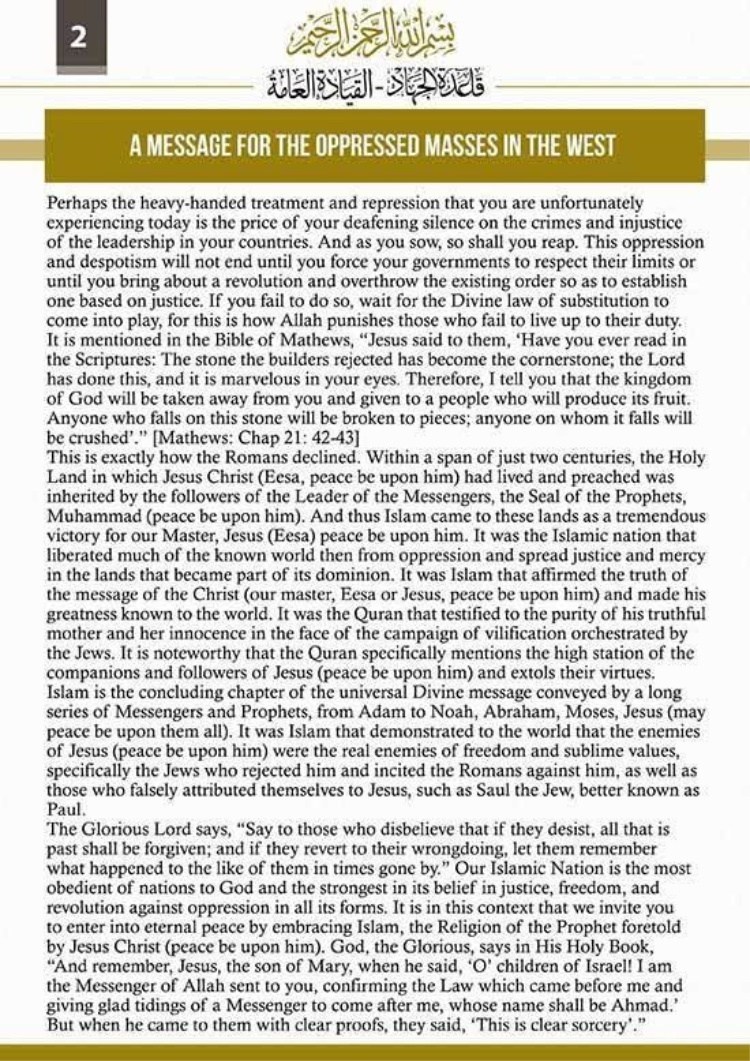 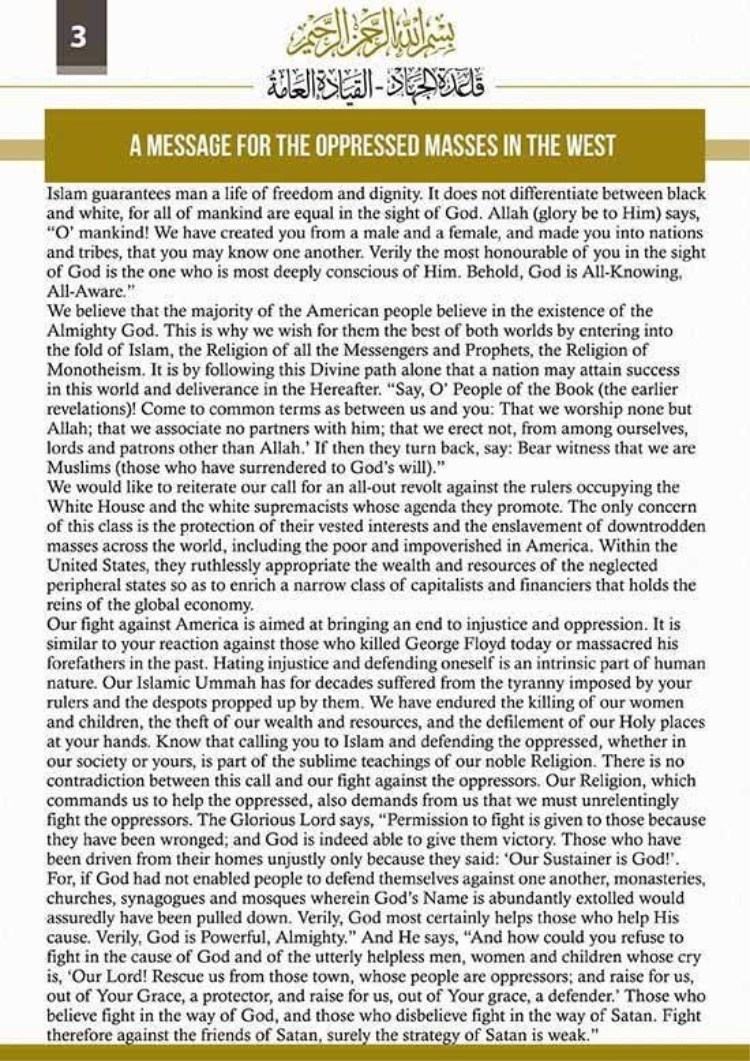 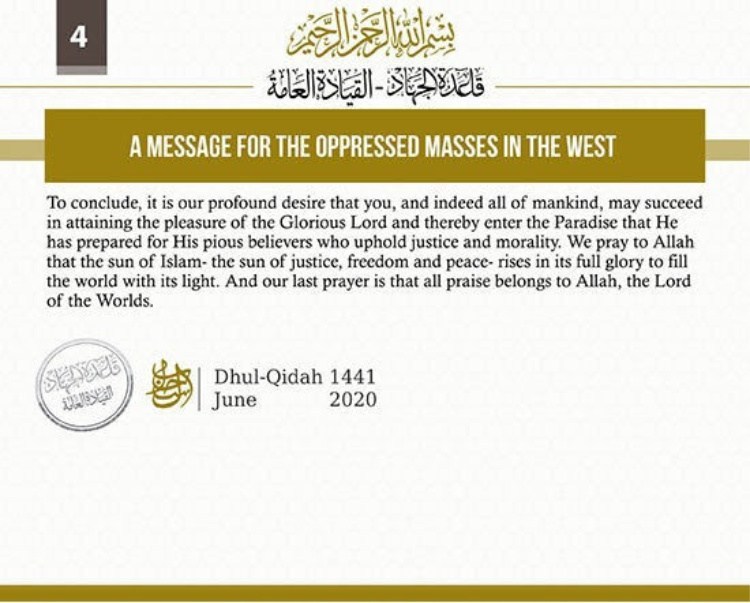 Notice how these antichrists try and quote Scripture while they openly reject that Jesus Christ is God in the flesh.  Their appeal is just as wicked as their religion, but consider that this group of jihadis were formed by our own Central Intelligence Agency and the Israeli Mossad.

The director of the National Security Agency under Ronald Reagan, General William Odom recently remarked, “by any measure the U.S. has long used terrorism. In 1978-79 the Senate was trying to pass a law against international terrorism – in every version they produced, the lawyers said the U.S. would be in violation.”

During the 1970’s the CIA used the Muslim Brotherhood in Egypt as a barrier, both to thwart Soviet expansion and prevent the spread of Marxist ideology among the Arab masses. The United States also openly supported Sarekat Islam against Sukarno in Indonesia, and supported the Jamaat-e-Islami terror group against Zulfiqar Ali Bhutto in Pakistan. Last but certainly not least, there is Al Qaeda.

Lest we forget, the CIA gave birth to Osama Bin Laden and breastfed his organization during the 1980’s. Former British Foreign Secretary, Robin Cook, told the House of Commons that Al Qaeda was unquestionably a product of Western intelligence agencies. Mr. Cook explained that Al Qaeda, which literally means an abbreviation of “the database” in Arabic, was originally the computer database of the thousands of Islamist extremists, who were trained by the CIA and funded by the Saudis, in order to defeat the Russians in Afghanistan.

America’s relationship with Al Qaeda has always been a love-hate affair. Depending on whether a particular Al Qaeda terrorist group in a given region furthers American interests or not, the U.S. State Department either funds or aggressively targets that terrorist group. Even as American foreign policy makers claim to oppose Muslim extremism, they knowingly foment it as a weapon of foreign policy.

The Islamic State is its latest weapon that, much like Al Qaeda, is certainly backfiring. ISIS recently rose to international prominence after its thugs began beheading American journalists. Now the terrorist group controls an area the size of the United Kingdom.

In order to understand why the Islamic State has grown and flourished so quickly, one has to take a look at the organization’s American-backed roots. The 2003 American invasion and occupation of Iraq created the pre-conditions for radical Sunni groups, like ISIS, to take root. America, rather unwisely, destroyed Saddam Hussein’s secular state machinery and replaced it with a predominantly Shiite administration. The U.S. occupation caused vast unemployment in Sunni areas, by rejecting socialism and closing down factories in the naive hope that the magical hand of the free market would create jobs. Under the new U.S.-backed Shiite regime, working class Sunni’s lost hundreds of thousands of jobs. Unlike the white Afrikaners in South Africa, who were allowed to keep their wealth after regime change, upper class Sunni’s were systematically dispossessed of their assets and lost their political influence. Rather than promoting religious integration and unity, American policy in Iraq exacerbated sectarian divisions and created a fertile breading ground for Sunni discontent, from which Al Qaeda in Iraq took root.

The Islamic State of Iraq and Syria (ISIS) used to have a different name: Al Qaeda in Iraq. After 2010 the group rebranded and refocused its efforts on Syria.

And Israel’s Mossad has been right there along the way, as well.

And don’t tell me they aren’t in on it.  They’ve been helping the very people we call ISIS and Al Qaeda.

And it’s even more than that.  Former Texas congressman Ron Paul stood on the floor of the House of Representatives to talk about the creation of Hamas by Israel.

Personally, I think all of this propaganda we are under and the timing of this message is twofold:

In both scenarios, I encourage Americans to be armed and trained with their weapons.  Go out, celebrate liberty and be vigilant and at the first sign of any of these people taking this advice seriously and popping their heads up to harm other Americans, put them down for good… don’t shoot to wound because there will never be justice.  Eliminate the threat completely and others will learn quickly!

Precious: Canadian Children Call & Leave Messages For Canadian Truckers In Convoy – “Thank You For Fighting For Our Freedom… For Being Our Heroes” (Video)