Home»Politics»Come Monday, Government Will Be Throwing More Of Your Money At Indoctrination
Politics

Come Monday, Government Will Be Throwing More Of Your Money At Indoctrination

Anti Fed Ed Warriors, you know I’ve devoted countless hours of research into the workforce ties to what once was academics. You also know (if you’ve followed my blog for a while) that I use NC (where I live) as an example of what may lurk in your State. However, more often, we discover that NC isn’t so much an education leader (like the State leaders like to believe), as the State is federal government follower, just like every OTHER State and US Territory. 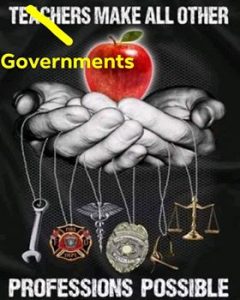 Because the shift from academics to 100% CBE (Competency Based Education) is happening all across the USA, it’s no surprise that the CCSS Machine’s been greasing up each State General Assembly to help them pass legislation and involve educratic think tanks to create policy to support the entire mess.

What do I mean? Well, using NC’s upcoming 12/9/19 meeting in Raleigh (the State Capital City) as an example, simply this: that the powers over education and workforce will gather to discuss 2 grants the State has enacted to comply with federal laws/policies. (*Note: the picture below is dated, but notice the web of how STEM, CCS, CCR, and Career Pathways are all connected.) 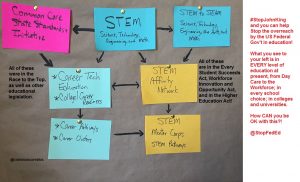 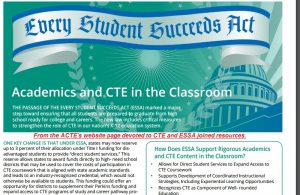 Warriors, I was sent an email announcing the 12/9 meeting for this Program. As I said, there are 2 grants involved. One for the NC CTE Commission and the other for its more technical (data tracking) support system, the NC Education and Workforce Innovation Program.

Did you notice ‘grade expansion’? Warriors, that’s for 6th and 7th graders! 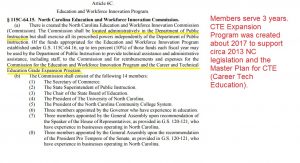 (Source for both the NC CTE Commission and Ed/Workforce Innovation)
Money attached to expanding CTE to younger and younger students? Anywhere between $700,000.00 and $1 million. Those in the Program (leaders, not students) must report to Local Planning Systems for Regional Services.

The goal of the expansion? So more students can graduate college and career ready. Between the Commission and the Innovation, more public private partnerships (P3s) are mandated. As are, partnerships between K-12th grades and all types of public colleges/universities in NC.

Why expand? To force more aligned paths to employment in a regional capacity. As we know, regionalism is a key component to the UN (United Nations) reshaping of our nation. Both ESSA and STEM embed regionalism in our lives.

If you’d like to read the 2018 Report to the NC General Assembly on the ‘successes’ of The Commission’s Expanding CTE for 6th and 7th graders, go here. 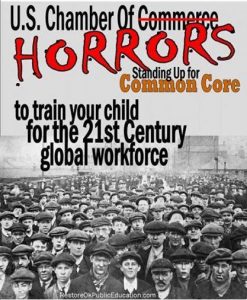 CTE Expansion In All The Other States/Territories:

Warriors, would you be shocked to learn that in 2018, the national group for pushing CTE (ACTE, Advance CTE) celebrated 6 years of alignment?  According to the ACTE, future action areas for each State/Territory include making funding streams possible for all, especially low-income, and ‘alternate’ education, creating more intrusions via P3s, especially businesses. Using industry-created credentials to dictate diplomas. Increasing dual enrollment and early colleges. (*Note: every one of these action items are mandates from ESSA.)
ACTE is a long standing CCSS Machine member organization. 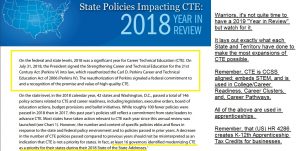 If you’d like to read the ACTE’s Report (2019’s will be out in Jan. 2020), go here. Be sure to look at the short statement under the ACTE. It’s crystal clear that the false rhetoric of work/education is one many leaders have bought into 100%.  I know my County Commissioners have swallowed the lies about economic development and education ‘joining at the hip’. Be sure to check out what your leaders have done.

Education Commission Of The States:

If you’ve not heard of this group, it’s a nasty CCSS Machine member group as well. In their early 2019 Report, they laid out the policies from around the nation concerning the speeding up of CTE for all ages/grades. Warriors, let’s remember, policy is NOT law.

I urge you to read this short Report. You’ll see how ECS used State legislation examples which twisted State laws to support the policies and agenda behind workforce based education found in CTE, STEM, CCR, CP, and everywhere in between.

Warriors, those of us who read the entire ESSA (either in Final Conference Report version or the Final Law version; both are carbon copies of each other, the difference is font size.) have been saying for years that because WIOA was embedded in ESSA, that meant that workforce industry created (thus, credentialed) standards replaced academic standards. As you know, many citizens will not believe such an activity took place.

Well, I’ve found the Federal Registry entry which absolutely verifies the recent passage of the Strengthening CTE for the 21st Century Act, not only codified both WIOA and ESSA, but also can tie to the HEA (Higher Education Act).

Why? Turning Americans into ‘human capital’!
“PreK to Gray”, “cradle to grave”, ‘lifelong learning’, and ‘learn to earn’.

This is why we’re seeing an increase in conversations about ‘more choices in education’ or ‘education savings accounts’, dual enrollment, early college programs, and, apprenticeships.
It all connects workforce to education. 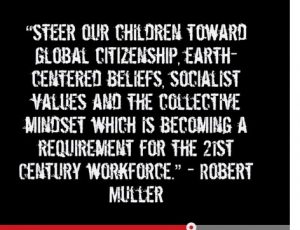 So, what can we, the Warriors Against Fed Ed do to help combat this?
1) Educate your local leaders that workforce development and education are not Constitutional, the combination is a product of the agenda from the UN, G20, and other CCSS Machine groups.

2) Workforce development skills destroy classic academics. If academics are continued to be ignored, we’ll see students at all levels become less able to read and think on their own.

3) Elections will use CTE as an issue to continue the overreaches into our lives, especially at a regional level. This again, is part of the shifts needed from within America to bow to the UN’s Sustainable Development Goals. SDG #4 is quality education for all, SDG#8  is decent work for all. They are combined ON PURPOSE.

4) Know that you’ll need facts and laws to back up what you say. You can be marginalized for opinions much faster than when State and Federal Statutes are cited. Use the US Constitution, too.

5) Don’t speak out alone, if at all possible.

Christian Zionists Returning Bethlehem To The Days Of Herod

Come Monday, Government Will Be Throwing More Of Your Money At Indoctrination