Europe’s corn yield is expected to drop by nearly a fifth due to a devastating drought. The bloc’s Monitoring Agricultural Resources forecasted that this upcoming harvest is not going to be a plentiful one.

Besides the news of record high electricity prices, a troubling new crop failure report about a low corn yield has popped up. According to Bloomberg, the plunge in corn output could result in further food inflation. It will boost feed costs for livestock herds, adding to even more woes for farmers who are plagued with elevated diesel and fertilizer prices.

This is #Europe’s future: corn that dried out before it could grow to be harvested as far as the eyes can see. #drought #climatechange #summer #france #charentemaritime pic.twitter.com/cRlDccLwcd

In late August, about half of Europe is under a drought warning. Crops, power plants, industry, and fish populations have been devastated by the heat and lack of rainfall. The European Commission Joint Research Centre warned earlier this month the ongoing drought is the worst in 500 years as vast amounts of farmland turn to dust. –ZeroHedge

Increasing crop failures because of drought will only exacerbate the food crisis that started long before the Ukraine “invasion”. Supermarket prices for meat in the EU jumped 12% in July versus a year earlier. Milk, cheese, and eggs are also skyrocketing at record rates.  This allows us to come to the conclusion that inflation in Europe will remain quite high. As explained by Germany’s central bank chief Joachim Nagel: “The issue of inflation will not go away in 2023.”

Oddly enough, Europe’s centuries-old “hunger stones” were recently revealed in the Elbe River, which runs from the mountains of Czechia through Germany to the North Sea. The stones date back to a drought in 1616 and read: “Wenn du mich siehst, dann weine.”That translates to “if you see me, then weep.” 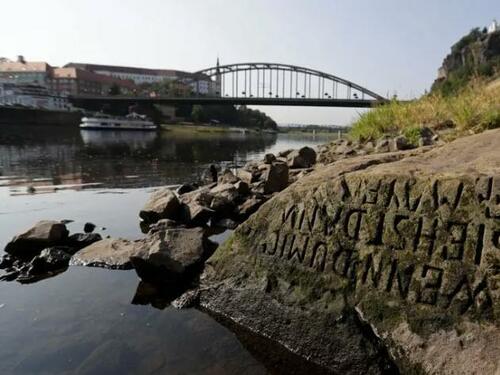 The warning on the stones appears correct because the new crop report forecasts corn yields will drop 16% below the five-year average, according to a report by ZeroHedge. That compares with a July forecast of an 8% decline. The timing seems uncanny, that’s for sure!

Will Italy’s Election Foreshadow US Midterms?

What Are The Odds? US, Europe, Africa & China Are All Simultaneously Experiencing Droughts Of Epic Proportions