The heat is coming on in the midst of what appears to be three criminal and ethics investigations into the fraud, perjury, felony actions and unethical behavior of appointed Lee County Sheriff Carmine Marceno,  a former Lee County Deputy has dumped the entirety of documentation against Marceno to expose his corruption and criminal activity in violation of Flordia law to Governor Ron DeSantis, Attorney General Ashley Moody and Commissioner Rick Swearingen of the Florida Department of Law Enforcement.

In a letter dated October 14, 2019, which is to be mailed on Wednesday from Tallahassee, Dr. Lee C. Bushong provides a letter, including 84 pages of documents I have been providing to the public, as well as the above mentioned for months concerning the documented evidence that Carmine Marceno committed a felony for over a decade in the Sunshine State, along with perjury and fraud.

I’ll remind you that none of the people mentioned above did really anything concerning Marceno’s conduct or crimes except to sweep them under the rug and in large part, the Southwest Florida media has been complicity in government inaction and the crimes of Marceno due to their silence in reporting the truth the people.

I’ll also remind you that Bushong actually has a doctorate, unlike the fraudulent education being perpetrated on the people of Lee County at their expense by Marceno, who spent over 12 years in college, but didn’t even obtain an Associate’s degree.

Bushong then listed the following violations of law that Marceno committed.

Dr. Bushong then provided a visual so that those investigating my be able to follow the timeline of Marceno’s crimes. 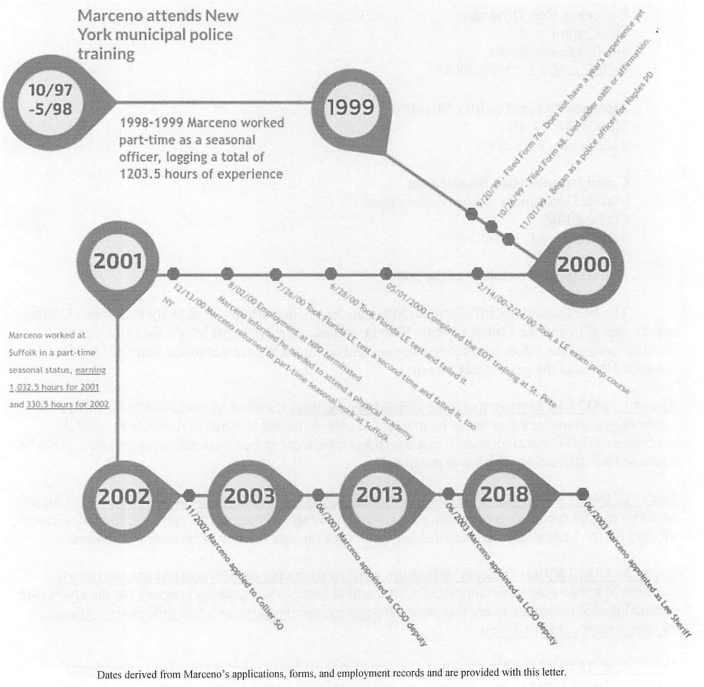 He goes on to list in detail Marceno’s crimes by date and statute.

The letter and documentation are one of the best comprehensive complaints against Marceno to date, and then Bushong adds the documents that I have provided over the course of my reporting.

It also comes in a long line of complaint letters filed by former Lee County Sheriff Rod Shoap, which have produced results and investigations.

Bushong’s 84-page letter and documentation can be read below.  Everyone don’t hold your breath for a response from Marceno or Southwest Florida media to report the facts here.

Marceno Complaint No Add1 by Tim Brown on Scribd