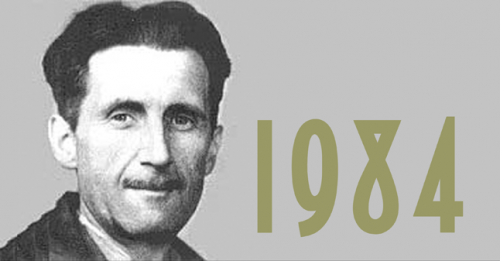 From the LA Times, on a key scene from the movie about Watergate, All the President’s Men:

“Leaning on a desk in the Post newsroom while debating with Woodward and Bernstein about whether to run an early Watergate story, [Jason] Robards’ Bradlee says, ‘I can’t do the reporting for my reporters, which means I have to trust them. And I hate trusting anybody’. He pauses, looks at them, looks at the article, then steps toward them. ‘Run that baby’.”

After a deep investigation, I’ve hit gold: George Orwell hacked the Podesta emails and sent Hillary Clinton down to a stunning defeat. There it is.

“…to repudiate morality while laying claim to it, to believe that democracy was impossible and that the Party was the guardian of democracy…” [This statement influenced readers to see that lying government leaders were pretending to a moral sense they did not possess.]

“But actually, he thought as he re-adjusted the Ministry of Plenty’s figures, it was not even forgery. It was merely the substitution of one piece of nonsense for another. Most of the material that you were dealing with had no connexion with anything in the real world, not even the kind of connexion that is contained in a direct lie. Statistics were just as much a fantasy in their original version as in their rectified version.” [Generations of readers realized that the government was simply inventing itself as it wanted the public to see it. Government was a hoax. And if government was a hoax, and you wanted to reveal that, you would have to find a way into secret communications. Thus, Orwell spawned untold numbers of independent spies who began looking into the private communications of political power players.]

“Don’t you see that the whole aim of Newspeak is to narrow the range of thought?” [This statement alerted readers that news networks were omitting a whole range of ideas about the true actions of government—and therefore, again, independent citizens would have to dig into the personal communications of leaders, in order to discover what they were actually thinking and talking about.]

“The two aims of the Party are to conquer the whole surface of the earth and to extinguish once and for all the possibility of independent thought… All rulers in all ages have tried to impose a false view of the world upon their followers.” [The effect of this inflammatory statement is obvious. Rebels, generations of rebels have probed the inner workings of the government, in order to expose what the government is actually doing, in order to prevent a complete takeover.]

George Orwell didn’t know John Podesta and Hillary Clinton, but he knew their type. He knew the mindset of endless numbers of politicians and leaders, and he characterized them in his novel. And from that flowed an ongoing multi-generation rebellion.

And in retrospect…he must be punished.

First, his book must be banned as a prime example of “fake news.”

TRENDING:  Ransomware Is Tip Of The Iceberg: “You Could See 90% Of Americans Die As A Result Of A Prolonged Power Outage Because The Grid Gets Hacked”

Hopefully, then, in five or 10 years, people will forget the book ever existed. It will become dust, less than dust. As Orwell himself wrote, “All that was needed was an unending series of victories over your own memory. ‘Reality control’, they called it…”

In the meantime, any discussion of Orwell in academic settings must refer to him as a tool of, say, Russia. Yes, in writing 1984, Orwell was fronting for a Russian agenda. Even though 1984 fired numerous shots across the bow of the Soviet regime…what difference does it make? Actually, the contradiction works to confuse young minds. That’s a good thing.

“War is peace. Freedom is slavery. Ignorance is strength.”

He wrote a book that must never be read.

He is the basic thought-criminal.

US DEPARTMENT OF JUSTICE ISSUES WARRANT FOR GEORGE ORWELL IN PODESTA EMAIL HACK.

Business Leaders Are Begging Biden Not To Crash The Economy