Freedom party leader Geert Wilders has been convicted of hate speech today in the Netherlands.

I have long known, admired and worked with Geert Wilders. I brought him to CPAC back in 2009. He spoke at our Ground Zero Mosque protests in 2010. He is one of the world’s foremost fighters in defense of liberty, a modern-day Churchill

. He is a towering figure, iconic of the fight in defense of freedom of speech and freedom of conscience. We oppose jihad and sharia.

The unending persecution of Wilders is the byproduct of Islam in Europe. Today he was found guilty of discrimination — hate speech — in other words, violating the speech laws under the sharia (Islamic law).

I predict this will backfire and Geert Wilders will go on to be elected Prime Minister in the next election.

Here is Geert Wilders’ response to his conviction:

Dear friends, I still cannot believe it, but I have just been convicted. Because I asked a question about Moroccans. While the day before yesterday, scores of Moroccan asylum-seekers terrorized buses in Emmen and did not even had to pay a fine, a politician who asks a question about fewer Moroccans is sentenced.

The Netherlands have become a sick country. And I have a message for the judges who convicted me: You have restricted the freedom of speech of millions of Dutch and hence convicted everyone. No one trusts you anymore. But fortunately, truth and liberty are stronger than you. And so am I. 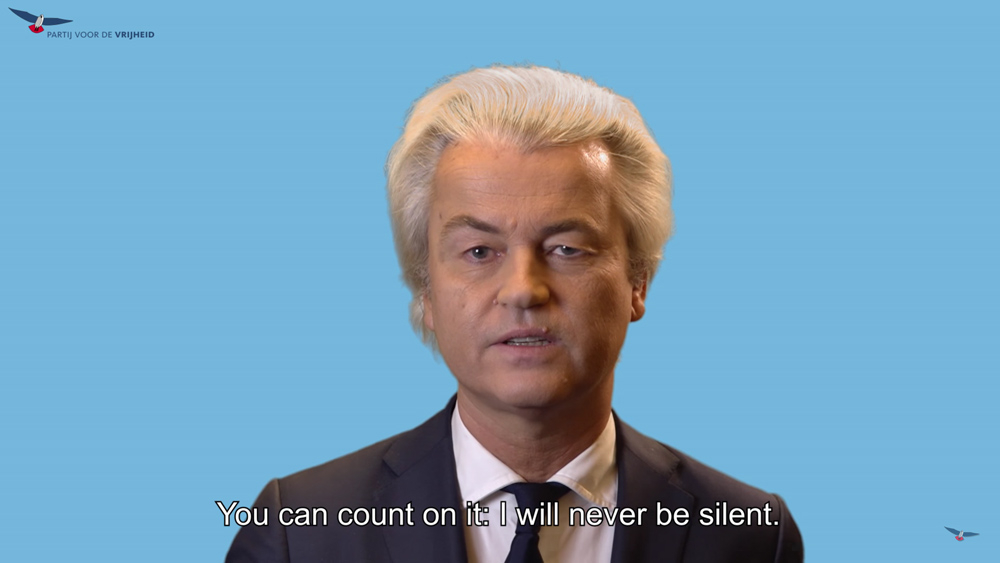 I will never be silent. You will not be able to stop me. And you are wrong, too. Moroccans are not a race, and people who criticize Moroccans are not racists. I am not a racist and neither are my voters. This sentence proves that you judges are completely out of touch.

And I have also a message for Prime Minister Rutte and the rest of the multicultural elite: You will not succeed in silencing me and defeating the PVV. Support for the Party for Freedom is stronger than ever, and keeps growing every day. The Dutch want their country back and cherish their freedom. It will not be possible to put the genie of positive change back in the bottle.

And to people at home I say: Freedom of speech is our pride. And this will remain so. For centuries, we Dutch have been speaking the unvarnished truth. Free speech is our most important possession. We will never let them take away our freedom of speech. Because the flame of freedom burns within us and cannot be extinguished.

Millions of Dutch are sick and tired of political correctness. Sick and tired of the elite which only cares about itself and ignores the ordinary Dutchman. And sells out our country. People no longer feel represented by all these disconnected politicians, judges and journalists, who have been harming our people for so long, and make our country weaker instead of stronger.

But I will keep fighting for you, and I tell all of you: thank you so much. Thank you so much for all your support. It is really overwhelming; I am immensely grateful to you. Thanks to your massive and heartfelt support, I know that I am not alone. That you back me, and are with me, and unwaveringly stand for freedom of expression.

Today, I was convicted in a political trial, which, shortly before the elections, attempts to neutralize the leader of the largest and most popular opposition party. But they will not succeed. Not even with this verdict. Because I speak on behalf of millions of Dutch. And the Netherlands are entitled to politicians who speak the truth, and honestly address the problems with Moroccans. Politicians who will not let themselves be silenced. Not even by the judges. And you can count on it: I will never be silent.

And this conviction only makes me stronger. This is a shameful sentence, which, of course, I will appeal. But I can tell you, I am now more vigorous than ever. And I know: together, we aim for victory.

Standing shoulder-to-shoulder, we are strong enough to change the Netherlands.

To allow our children to grow up in a country they can be proud of.
In a Netherlands where we are allowed to say again what we think.
Where everybody can safely walk the streets again.
Where we are in charge of our own country again.

And that is what we stand for. For freedom and for our beautiful Netherlands.

Populist anti-Islam Dutch MP Geert Wilders was found guilty on Friday of discrimination against Moroccans, but acquitted of hate speech in a closely-watched trial ahead of next year’s key election.

In their verdict, the judges said “the inflammatory character of the way in which the statements were made have incited others to discriminate people of Moroccan origin.”

But they added that there was “insufficient evidence” that his words at an election rally in 2014 amounted to incitement to hatred.

The judges also dismissed the prosecution’s request to impose a 5,000 euro fine on the far-right MP, whose Freedom Party (PVV) is eying an upset victory in the March 2017 polls.

“In this case, the most important question is whether Wilders has crossed a line. This judgement has answered that question,” the judges said in their verdict.

“Therewith, the chamber finds that justice has been done. Consequently, no punishment is imposed.”

Wilders, 53, immediately gave notice that he intended to appeal his conviction, as he believed it was “a big loss for freedom of speech.”

The most recent opinion polls predict the PVV will top the vote, saying it could seize 34 seats in the 150-seat lower house of Dutch parliament, some 10 seats ahead of his nearest rival, Prime Minister Mark Rutte’s Liberals.

Rather than hurting the controversial lawmaker, observers say his trial has boosted his popularity among Dutch voters, worried about the influx of immigrants and driven by eurosceptic sentiments.

Amid a string of populist victories in Europe and the November election of Donald Trump as the next US president, the outcome of the Dutch vote will be keenly watched.
– ‘Fewer Moroccans’ –

The three-week trial of Wilders had focused in particular on a statement made at a 2014 local government election rally in The Hague, when he asked supporters whether they wanted “fewer or more Moroccans in your city and in the Netherlands”.

When the crowd shouted back “Fewer! Fewer!” a smiling Wilders answered: “We’re going to organise that.”

Prosecutors told a three-judge bench they had taken Wilders to court because “racist remarks need to be stopped” after police received 6,400 complaints about his comments.

“Wilders singled out an entire group of citizens without making any distinction,” the judges ruled.

“This group has less rights to reside in the Netherlands. Therewith, this statement can be regarded as affecting the dignity of this group as a whole. It is insulting for the entire group.”

Throughout their case, prosecutors quoted numerous examples of Dutch-Moroccans who said they felt like “third-rate citizens” and that even “children are afraid” because of the politician’s statements.

Wilders boycotted most of the high-profile trial, and refused to appear in court for the verdict.

Just before the judgement was read, he said in a tweet: “Whatever the verdict, I will continue to speak the truth about the Moroccan problem, and no judge, politician or terrorist will stop me.”

If elected as the lowlands country’s new prime minister, Wilders has vowed to confiscate Korans, close mosques and Islamic schools, shut Dutch borders and ban migrants from Islamic countries among a raft of other anti-Islamic moves.

His views have seen him receive death threats including from terror groups such as the Islamic State group and Al-Qaeda. He is guarded at all times and called the “best protected man in The Netherlands”.

Political observers say Wilders will benefit either way from the verdict due to the publicity the trial has generated.

The conviction however will mean he has a criminal record which could for example impact travel plans to the United States, popular daily tabloid Algemeen Dagblad said.

WHO Pushes The Propaganda Of Monkeypox: “There Will Be More Cases”

Bizarre Theories About Monkeypox Going Around