Yes, Minnesota is committing societal suicide as they not only elected a Muslim who married her brother to represent them in Congress, but they elected a Communist-backed, Muslim who stands accused by several women of physically and verbally abusing them.  On top of that, Keith Ellison, aka Hakim Muhammad, has a plethora of traffic violations, including driving while his license was suspended, and unpaid taxes to the IRS.  In short, they have elected a criminal as attorney general.

Democratic U.S. Rep. Keith Ellison will be Minnesota’s next attorney general, defeating Republican Doug Wardlow after a bitter campaign marked by allegations of domestic abuse and an intense spotlight on both candidates’ pasts.

Ellison helped deliver the DFL Party a sweep of the statewide elected offices and was met by a raucous room of supporters chanting his name at the party’s election night celebration in St. Paul. Ellison acknowledged the difficulty of the race but said his campaign persevered thanks to his supporters.

“Every single day I will wake up and I will fight to protect the rights of all of us,” Ellison said.

Ellison said “we are all in this together” and that “we are not going to cast anybody away.” “Immigration is a good thing,” he shouted, “having a good-paying union job is a good thing.”

So, Minnesota will have a new attorney general in Hakim Muhammad, but he is a corrupt man.

In addition to unpaid taxes to the IRS, Keith Ellison’s many traffic tickets became one of the issues for him when he ran for US Congress the first time. Scott Johnson from Powerline has written about it as far back as 2006 when Ellison first ran for US Congress. Back then Ellison’s driver’s license was suspended even at one point. This whole summer Ellison has been driven around by other people to various events which have had some of us wondering if his driver’s license isn’t suspended again.

Next, though it was reported back at the end of August that Ellison had made steps toward activating his license, there was no evidence he had done so.

Though his law license is not active, DFL attorney general candidate Keith Ellison has completed the 45 hours of continuing legal education credits needed to get it reactivated, according to a campaign spokesman.

Ellison also has filed a plan with the state Board of Continuing Legal Education that commits him to an additional 45 hours of CLE training, said Sam Fettig, Ellison’s communications coordinator.

Though she wouldn’t comment specifically on Ellison, CLE Board Director Emily Eschweiler confirmed that those two steps would put an attorney on track to reviving a voluntarily inactivated law license.

Ellison’s license to practice has become something of a conservative meme. It was broached during Sharon Anderson’s unsuccessful primary bid for attorney general. She filed a petition with the Lawyers Professional Responsibility Board to revoke Ellison’s eligibility because he lacked CLE credits and carried an inactive license. But Anderson said last month that effort had failed.

Ellison’s general election opponent, Republican Doug Wardlow, took the issue up on Monday. A Wardlow press release claims that Ellison “surrendered” his law license and then falsely stated that members of Congress must give up law licenses upon taking the oath of office.

Wardlow also maintains that Ellison has a 180-hour deficit in his CLE requirements.

“It could take Keith Ellison years to take all the make-up classes he would need to get his law license back,” the campaign said in a press release. “He may never be able to practice law in Minnesota again.”

Based on information supplied by the CLE Board, however, that statement likely is incorrect.

It is not clear if Wardlow’s 180-hour tally of unfulfilled CLE credits is accurate. The total is based on a belief that Ellison’s gave up his license in 2012, according to the press release. But Wardlow’s spokesman Billy Grant said Monday that it might have been deactivated as early as 2006. So Ellison might lack an even more credits, he said.

Either way, it likely won’t matter. To fulfill all his commitments, Ellison likely would need to earn no more 90 total CLE credits.

Rule 12 of the Continuing Legal Education Board’s rules does state that to be automatically transferred to active status, attorneys must make up all unfulfilled CLE hours. But automatic transfers aren’t the only path to reinstatement.

Rule 12 also permits a “discretionary transfer,” which allows the CLE board director to activate a license without forcing the attorney to make up every missing credit hour. There are guidelines to follow, Eschweiler said, but it can be done.

“What the rule states is that lawyers can come back to active status upon taking 45 credits,” Eschweiler said. “Then they would have a number of credits to make up in addition to that—up to 90 credits.”

A search of Minnesota Lawyers Professional Responsibility Board did result in showing that Ellison is now active as an attorney in the state. 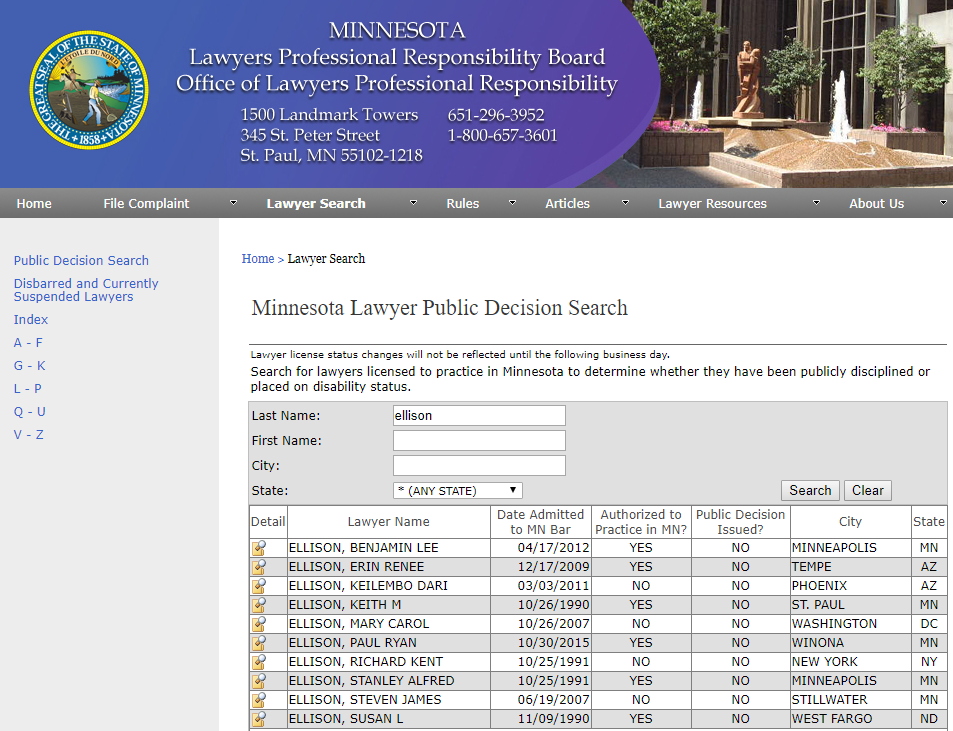 However, the report above was published on August 30, the Lawyer registration office confirms that he became active again on August 29, 2018.

Calls to the CLE office to determine whether Ellison put in the require education training time or whether someone used the “discretionary transfer” to make him active were unreturned at the time of the writing of this article.

According to many who live in the state of Minnesota, Muslims were being bused from precinct to precinct to vote over and over again for Ellison.  Massive voter fraud has been suspected to put Ellison, a man who is clearly anti-American, in the office of attorney general.

And just what will he be doing in that capacity?  According to MPR News:

“Attorneys general run to be the people’s lawyer and those kind of slogans are good for the voters but they don’t help people understand what the attorney general really does,” said John Tunheim, the state’s chief U.S. District judge who previously spent more than a decade working as solicitor general and deputy under former Attorney General Skip Humphrey. “It’s hard because the office is so wide-ranging in its purpose.”

While consumer protection is a big part of the job — the most famous example is the landmark tobacco settlement in the 1990s that brought $6 billion into the state — Minnesota attorneys general have also pushed to change state laws and helped county prosecutors in high-profile murder trials.

They’ve also stepped in to check federal government action, a role that’s increased the profile of the office for both parties during the Obama and Trump administrations. Republican attorneys general sued to block implementation of the Affordable Care Act, for example, and Democratic attorneys general, including Swanson, have acted to block the federal travel ban and policies on net neutrality.

They can also intervene when they feel the federal government has failed to protect the state’s citizens, said Prentiss Cox, a professor at the University of Minnesota’s law school who previously worked in Swanson’s office. “The attorney general can step in and protect people in the state even when the federal government is running away 100 miles per hour.”

The state’s founders expected the attorney general would serve more as in-house legal counsel, defending day-to-day government decisions against lawsuits and providing advice on everything from education policy and prison meals to accidents that happen on the state’s roadways.

It’s not glamorous work, Tunheim said, but the attorney general’s office managed bring in top attorneys with the promise that they would immediately get courtroom experience on a wide array of issues. “There are a lot of crises every day in state government,” he said.

Attorneys general are also political figures. They run under party labels and can use that platform to push for changes to state policy.

Then there was this little nugget from a Democrat a couple of years ago when Ellison was seeking the DNC chair regarding his disregard for the law.

Bob Mulholland, a DNC member from California and one of 447 who will vote in the February election, says he has not backed a candidate yet but will not support Ellison.

“One Republican said to me, ‘You’re going to elect a tax cheat who drives without a license?’” Mulholland said. “It’s absurd.”

“If Ellison were running as a Republican, Democrats would attack him as a tax cheat, so I have no idea why Washington insiders are urging the grassroots to elect another insider. If you can’t drive or pay taxes, you can’t organize your life, so I concluded early on that he can’t organize for this job.”

Now, Minnesota has gone far beyond making him head of a political party.  They’ve installed him as their attorney general.

Minnesota is a very corrupt state, as far as government is concerned.  Democrats have held the office of attorney general since 1971.  Now, they have a Communist-backed, anti-Christ Muslim in the position.  Does anyone in their right mind think that Keith Ellison will be upholding the law or will he be engaging in more violations of the law, possibly using his position to cover for allegations of woman abuse in the future?  Time will tell.