Home»US»Taxpayers Fund Screening Of Movie “Why Don’t We Murder More White People?”
US

And this is coming right out of the very place that can’t keep human feces off the streets.  That’s right San Francisco, the modern-day Sodom and Gomorrah, is using taxpayer money to push a racist movie titled “Why Don’t We Murder More White People?”

Sadly, here’s what ends up happening.  The people continue to allow this sort of propaganda to be funded and shown.

Then, it gets into the hearts and minds of some in the city as both an ideology and a tolerance by representatives to steal the people’s money to promote this kind of garbage.

Edward A. Ross has written about this at DC Clothesline, courtesy of American Rennaissance.

Here’s what he had to say about it. 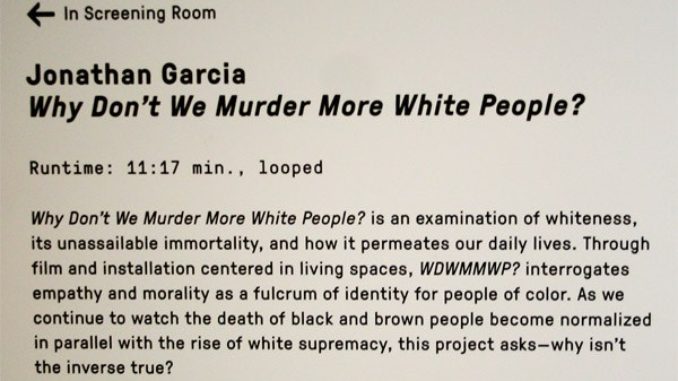 San Francisco’s Yerba Buena Center for the Arts (YBCA) is a large museum next to the Moscone Convention Center downtown. This non-profit is funded by the City of San Francisco, the National Endowment for the Arts, Bloomberg Philanthropies, and the James Irvine Foundation. From July 23 to August 25, YBCA screened Jonathan Garcia’s movie Why Don’t We Murder More White People? It was on an endless loop and each cycle lasted 11 minutes and 17 seconds, and is now on Youtube. Mr. Garcia produced this video as a year-long YBCA fellow, for which he got a stipend and an honorarium. YBCA identifies him as: “Community Engagement & Inclusion Associate, Chief-of-Staff of the SOCIAL CLUB, author.”

Most of the video is of non-whites complaining about whites. They say such things as:

“I’m angry at white people most of the time.”

“Whiteness invades my life and my mind.”

“You could be violent, and through that perpetuate whiteness. You could not look at your whiteness and be perpetuating that violence, still. Like, you could do nothing and still be violent.”

Some of the speakers encourage violence:

“I think if you’re not supporting people of color and to end white supremacy, and you’re neutral, or you are that person that’s perpetrating it, then you shouldn’t—I think you deserve harm.”

“I think that harm is radical. But I think sometimes radical is needed.”

“And, sometimes I feel like non-violence is not the best route.”

The video assumes that white people are a kind of plague; the only question is what to do about them. Some of the speakers do not call for violence, but they never say killing whites would be immoral. They have other reasons for hesitating to kill whites:

“I think the reason we don’t murder more white people is because they are protected, in a sense.”

“You don’t wanna be violent ’cause that’ll make you look bad or something. Or like, make you and your community look bad. But, whiteness is violence.”

“I think that we don’t murder white people because there is a thought process around, ‘White is Right.’”

Some of the speakers make a distinction between killing white people and destroying “whiteness:”

There is also an interview with a white woman who says:

I think that the insidious nature of whiteness begins at a very young age. And because of the historic tie that we have to white children as pure members of our society, we do not address the harm and the evil that they inherently bring to communities of color, to the school playground, to the classroom, to wherever they are. We don’t address that because they’re too young.

These short commentaries are interspersed with staged shots of a white hand grabbing a non-white man’s head from the top and turning it back and forth. There are also shots of a non-white man wearing a whiteface mask as he plays chess or pulls a rope (an image of lynching?) out of his laundry. At one point, there is a voiceless caption over the man in whiteface: “Whiteness is the root of all trauma.”

Presumably, these peculiar scenes are what makes this an “art film,” to be screened at an art center.

The exhibit panel at YBCA introducing the video noted that “we continue to watch the death of black and brown people become normalized in parallel with the ruse of white supremacy.”

It wouldn’t be fair to expect anyone at the art center to know that Roland Fryer, the youngest black man to receive tenure at Harvard, published a 2016 study showing that blacks and Hispanics are slightly less likely to be shot by the police than whites. Nor would they have heard that another recent study concluded: “We find no evidence of anti-Black or anti-Hispanic disparities across shootings, and White officers are not more likely to shoot minority civilians than non-White officers.” This is “art,” after all; the facts need not concern us.

Yerba Buena Center for the Arts would never showcase a video of whites talking about non-whites—except, perhaps, to lavish praise on them. Deborah Cullinan, CEO of YBCA, declined my request to screen a video of the white perspective on race.

YBCA describes Miss Cullinan as “one of the nation’s leading thinkers on the pivotal role arts organizations can play in shaping our social and political landscape, and has spent years mobilizing communities through arts and culture.” What does she hope to “mobilize communities” to do by screening a video about murdering whites?

Are you paying attention, America?  This is how the Socialists and Communists are working in our midst to turn us against one another.  It’s long past time, we dealt with them lawfully, removed them from office and sought to prosecute them, and there’s just a such a plan to do it.  Find out more about it here.

Behind The Deep State: How The US & Russia Support Islamic Terrorism