Over and over we uncover voter fraud across the united States and the latest is in Texas.  A citizen journalist uncovered a Democrat mail-in voting nursing home scandal, which should gain some serious attention and bring the perpetrator to justice, but will it?

Patrick Howley with National File interviewed Colleen Vera, who is a citizen journalist that has uncovered a massive voter fraud ring in the state of Texas that involves Democrat campaigns and mail-in voting, something that DC Democrats are attempting to push through in another unconstitutional stimulus package.

Vera writes at Texas Trash Talk about her findings:

After the 2016 Democratic Primary, a candidate for Harris County Constable (Pct 3), Jasen Rabalais, filed a lawsuit claiming that a campaign worker for another candidate, Michel Pappillion, “deliberately falsified, illegally completed or unlawfully influenced the ballots and early voting applications of elderly residents in Harris County.”

The lawsuit was dismissed. But the following audio tapes had been made by the  Rabalais campaign after he found out that an “alleged harvester” was working for an opponent’s campaign.

Then during the 2018 Primary, the following video was posted by Direct Action Texas. It appeared to show a campaign worker for Texas State Rep Harold Dutton Jr harvesting ballots of 400 elderly voters.

After viewing the video, I decided to do some research. I figured, if there was any evidence of mailed ballot voter fraud to be found in Harris County, the more recent one – Dutton’s race – was the best place to start.

I filed a request for public information covering the 1359 voters who voted by mail in Harold Dutton’s race. I requested electronic copies of the voters’:

My first thought was to match each voter’s mailed ballot application with the voter’s ballot envelope and compare signatures to find those which may not match. But as I reviewed the documents, something else jumped off the page…

32 hand written applications for mailed ballots – all from different voters – but all written in the exact same handwriting. 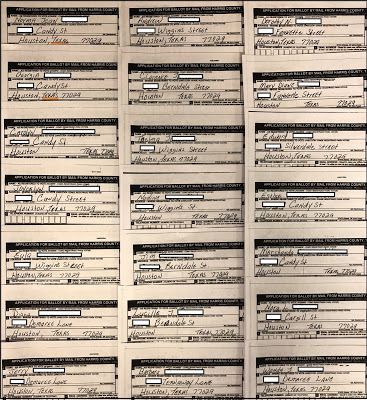 Looking closer, something else jumped off the page.

All 32 returned their application for a ballot by mail in the same pre-printed envelope with the same style stamp. 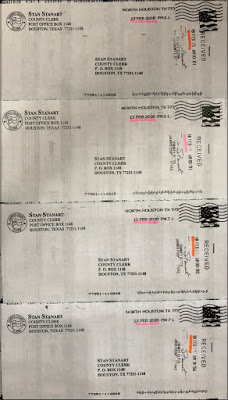 ALL THESE VOTERS LIVED

IN THE SAME PRECINCT!

And 90% used two of the same stamps used on the application.

Only 23% of total ballots returned for this race used that stamp combination. 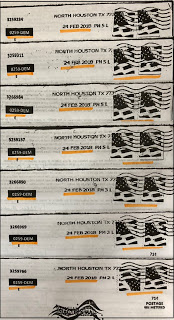 Additional research showed this same handwriting on multiple ballot by mail applications from precinct #259 every year going back to 2008.

See the rest of what Ms. Vera uncovered by clicking here.

Voter fraud has become so commonplace that it is rarely challenged and people brought to justice, but it’s high time it was treated as the serious crime it is against the people.

Where is Governor Abbott on this and where is the Texas attorney general?

Unprincipled Ignorance: Black Power Is As Dangerous As White Power – This Journalist Was Absolutely Right! (Video)

Christian Missionaries Attacked – Cops Collude Against Them… In America (Video)