The Unconstitutional Education Agenda Is Breaking The Bank!

Anti Fed Ed Warriors, I recently made a short video about the excessive billions of dollars being planned for the upcoming new fiscal year. These billions are for education. The funds cover MASSIVE data mining (student data rape), overreaches into our families and communities, arrange for alien children to become government dependents from an early age, and, plot SEL (social and emotional learning) grants for everyone.

My friends, Congress is most certainly displaying their ‘stupidity’, as is our current Administration. 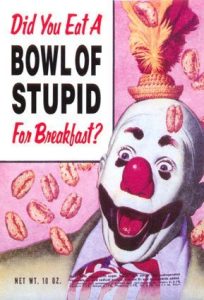 However, our ‘stupidity’ is also at risk of being seen IF we do NOTHING to stop this treasonous taxpayer abuse!

HR 7616, (introduced 7/16/2020) the Appropriations for the U.S. Dept. of Transportation/HUD and all related agencies. Look on page 136 for the $4.6 billion to be used for public housing. Page 137 shows that $25 million of the $4.6 billion will go to the Choice Neighborhood Initiative (CNI). What’s the CNI? It’s the federal government’s plan to manipulate neighborhoods into what IT believes neighborhoods should look like!

The ‘goal’ is to transform low-income housing neighborhoods into sustainable cookie-cutter hubs. Schools will most definitely be part of the transformation and contain those wrap-around services which ESSA (Every Student Succeeds Act) also mandated. 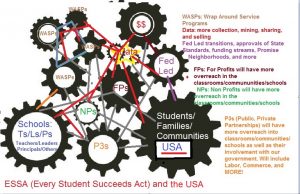 Just think the Promise Neighborhood portions of the ESSA meets Agenda 2030 and throw in the SDGs (Sustainable Development Goals).

Warriors, HR 7616 is sponsored by Rep. Price of NC. Mr. Price is ‘bought and paid’ for by the Big Unions including the NEA and the AFT.

HR 7614, (introduced 7/15/2020) the Appropriations for the U.S. Dept. of Labor/ED/HHS and all related agencies. This Bill is sponsored by Rep. DeLauro of CT. She’s ‘bought and paid’ for by Big Tech and Big Unions, including the AFT.

Warriors, ‘education’ is certainly present in this whopper. You’ll find it 22 times.

Page 8 shows that almost $104 million dollars will be devoted to ex-offenders rehabilitation (includes education and focuses mainly on workforce skill-based education). YouthBuild will get an extra $100,534,000.00. YouthBuild is a huge government alignment tool. Forget true academics, this is ALL about skill-based training.

It’s important to note that the almost $104 million will be divided up. Competitive State Grants ($25 million) will be workforce prep and $6 million used for the WQDI (Workforce Quality Date Initiative). As we know, WQDI uses data tracking to align education to jobs. It also ‘marries’ to the SLDS (Student Longitudinal Data System).

Also worth noting is that on page 117, the U.S. Dept. of Health and Human Services can accept private donations for alien children including their ECE (early childhood education) screenings. School supplies, clothes, and, ANYTHING else which helps the alien children’s lives. (This is definitely a fascist P3, public-private partnership!)

Over on page 122, the CDC (Centers for Disease Control) employee dependents can get their primary and secondary education debts covered which aren’t already covered from the Dept. of Defense!

The image below shows you that page 126 the dedicated education section begins.

Before I share with you the rest of the educratic overreaches, I need to insert here, that on pages 86 and 87 of HR 7614, The $5.9 billion dollars set aside for Child Care Community Development Block Grants. Social Services will get $1.7 billion in funds. These BOTH include schools and school-based wrap-around services to infiltrate families, even ones who do not use public education! Head Start and Early Head Start will receive $13 billion. So expect a tremendous amount of overreaches into our daily lives especially in the name of ‘student success’!

Warriors, keep those figures in mind and ADD to them, these:

Education Finance Grants for $4.4 billion to satisfy Sect. 1125A of ESEA/ESSA (money which goes to give incentives to those who receive the grants).

For the HEA (Higher Education Act), a whopping $46.6 million for Sect. 418A (money which goes for high school equivalency education).

Page 128, Impact Aid (mainly Indian Tribes and Military Bases), $1.5 billion for all federally affected schools under Title 7 of ESEA/ESSA, of that amount, $1.3 billion must go to basic support. Also, $48 million must be used for special needs and $17 million will be devoted to school construction.

School Improvement Programs will tie ESSA to the McKinney-Vento Act, the Education Technology Assistance Act, the Compact Free Association Amendment Act, and, the 1964 Civil Rights Act. All the school improvement programs will receive $3.6 billion dollars, including $38 million for new public schools AND ANY structure which can be attached to public schools for either modernizing the school OR offering a school-related service.

Page 130, Indian Education will get $181 million dollars above and added to their Impact Aid funding. Almost $2 million of this separate funding will go to innovation and improvement of schools. Remember, ‘innovation’ is a CCSS Machine code word for ‘data mining and tracking’.

Page 131, solely for SEL grants, a taxpayer bill of $110 million dollars. STEM education will get $85 million and Safe Schools/Citizen Education winds up with $218 million. ELA (English Language Acquisition) gets the biggest chunk of all: $797.4 million.

Page 132, IDEA funds for children and young adults (3-21) is set to receive $14 billion dollars. No doubt this will include all kinds of mental health overreaches based in SEL.

Lastly, on pages 146 and 147, the IES (Institute of Education Sciences) will use $630 million dollars to update and streamline ALL student data tracking systems.

S 4131 and HR 7302 (introduced 7/1 and 6/25, respectively), the Accessible and Affordable Internet Access for All Act. These sister bills will embed education 71 times in each version. Education will be tied to P3s (public-private partnerships). Be sure to look at the many related Bills to these two.

Especially HR 1693 and its sister. Those want to embed WiFi on all school buses in the US. The money amounts in the Accessible/Affordable Act are ANYTHING but affordable for the taxpayers, so this is why P3s were given a huge ‘green light’. What does this mean? More federal and corporate control of We the People! The rough total? $10. 4 billion! At least $9 billion will be devoted to a NATIONAL Broadband Connection Fund.

Warriors, a big alert for all of us is HR 2, the Moving Forward Act. This over 2,500-page bill has education embedded almost 400 times! This whopper has already passed the U.S. House of Representatives and is in the U.S. Senate. Connecting to education are all kinds of 21st Century workforce programs, so lots of money will be going to those types of skill-based education programs. On Page 79, entire communities will be eligible for Climate Change Innovation funds. (at least $250 million between now and FY 2025).

Warriors, even if this didn’t attach to education, this Bill is set to TOTALLY change America from the inside out!

Warriors, since the HR 2 is such a huge Bill, I’ll be looking more in detail to the massive amounts of overreach it contains.

US Perestroika: The New Indoctrination Into Socialism & Social Justice

The Unconstitutional Education Agenda Is Breaking The Bank!