What can you say at this point? They simply don’t have the numbers and they are desperately trying to get people to take the experimental depop shot. The latest antics they are employing is showing in in Louisiana. Apparently they held an even where you could get your criminal record expunged, get free food (someone is obviously paying for it, probably taxpayers), and get a chance to win a VISA giftcard.

On Saturday, October 9, 2021 various organizations, including public offices, put on this fiasco.

Among the names that were bringing the people of Louisiana this “social change” event were Sarah Holiday James, Judge Donald R, Johnson and State Rep. C. Denise Marcelle.

So, what kind of record expungements could you get for playing their version of Russian Roulette with the Fauci Ouchie shot? Misdemeanors and felonies. That’s right, you could get felonies expunged for rolling the dice with your life on the line and taking Big Pharma’s final solution. 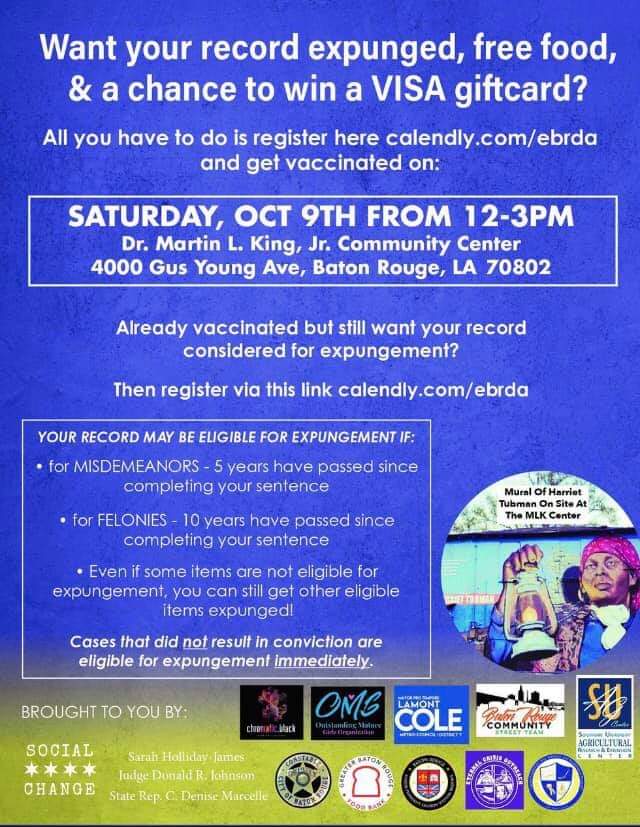 Of course, there were small requirements concerning those crimes and the expungement.

In the case of a misdemeanor, 5 years had to have passed since the person completed their sentence.

In the case of a felony, 10 years had to have passed since the person completed their sentence.

Oh, and hey, if you already took the depop shot and are still breathing, you are eligible too.

This is so corrupt I don’t even know what to say.

However, one thing is for sure, this only indicates just how desperate these people are to get these experimental shots in as many people as they can.

I mean this even tops The Hustler strip club in Vegas giving $5,000 packages out to those willing to take a chance with the poison pin prick.

I’m sure lots of criminals turned out to rub elbows with the criminals putting this show on. To me, it looks like bribing and I thought public representatives were forbidden not only to not be bribed themselves but bribing others.

The “Year Ending In 1” Curse