Home»Politics»Tyrannical Pennsylvania Governor: We Could Confiscate Your Guns Under Proposed Red Flag “Laws” Because Of Social Media Posts
Politics

I really don’t know where criminal politicians like Pennsylvania Governor Tom Wolf derive their alleged “powers” because they are certainly not coming from the US Constitution. In a Twitter post, Wolf clearly disregarded the rights of the people of his state that are protected under the Fifth Amendment of the US Constitution in order to confiscate their guns.

Wolf’s tweet read, “Red flag laws allow us to take action when someone who has a gun begins to act erratically. Red flag laws still require due process, and any removal of weapons is temporary.” 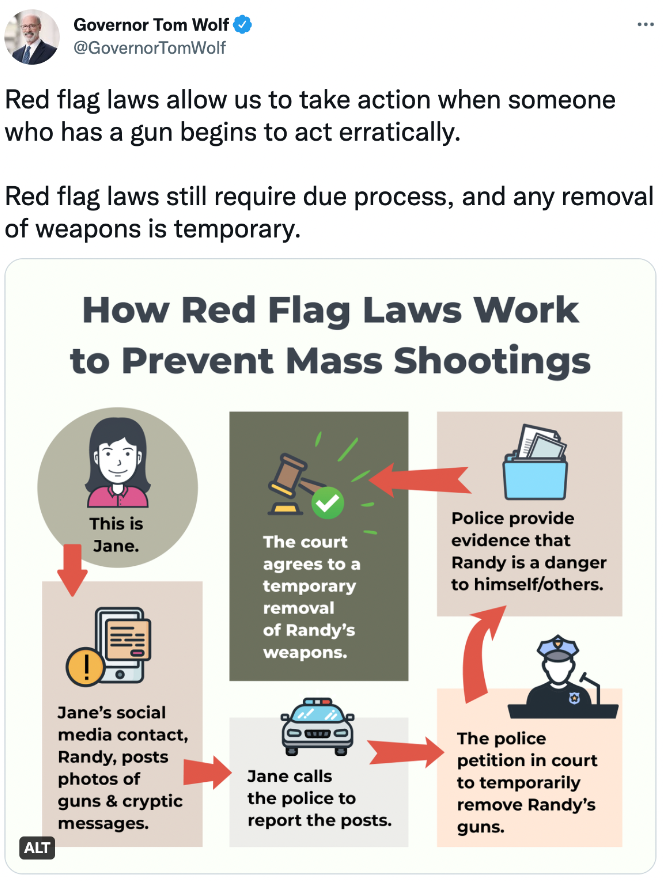 Like all gun confiscators, Wolf appealed to “common sense” gun confiscation bills, but the reality is that common sense is understanding the law that actually restricts him and his criminal government, which is the Second Amendment that reads, “… the rights of the people to keep and bear arms shall not be infringed” and “No person shall be held to answer for a capital, or otherwise infamous crime, unless on a presentment or indictment of a Grand Jury… nor shall be compelled in any criminal case to be a witness against himself, nor be deprived of life, liberty, or property, without due process of law…”

In other words, even with the alleged due process, no crime has been committed. Therefore, attempts to steal the people’s property, and yes that is what it is, is criminal and the People should use those weapons for their intended purpose, which according to the Second Amendment is in part of being in a militia to provide for the “security of a free state.”

When his political opposition rejected sending those unconstitutional bills to the House for debate, Wolf called it “shameful.”

That’s what I’d call today’s action – or, rather, inaction,” Wolf said. “Lawmakers have an opportunity to take commonsense steps, which the majority of Pennsylvanians support. Instead of taking a vote to advance these bills, they are just delaying debate on this legislation. Gun violence won’t delay. Every day the Republicans stall, more people are at risk.”

“This isn’t just a ‘Philadelphia’ issue,” he continued. “This is a statewide and national issue that must be addressed. It’s reprehensible that Republicans continue to stall when our own constituents want this addressed right now. I urge Republicans to stop these tactics and take action.”

No, sir. This is none of those kinds of issues. It is an issue of law and frankly, the law is not on the side of Wolf and those like him who want to infringe on the people’s rights at every whim they want to refer to as “erractic.”

That’s not all. Last week, Wolf sent the following letter to members of the committee that would not send the gun confiscation bills to the House for debate but rather deferred them to another committee.

“I have committed to doing everything I can to bring peace to our communities, but ultimately, sensible gun laws save lives, and the General Assembly must act to make statutory changes,” Governor Wolf said. “Communities across the commonwealth – urban, suburban and rural – have experienced the horror of gun violence. We must do our part to prevent these tragedies.”

Nonsense! This guy has done everything to wage war on the communities by violating his oath of office and attack the very ones he is there to serve. In other words, he is the troubler of Pennsylvania, not gun owners.

“If the aforementioned bills became law, they would not infringe upon the rights of law-abiding gun owners,” Wolf wrote in his letter. “This is not about taking guns away from those who lawfully own and operate them, it’s about ensuring guns are appropriately locked up and kept out of the hands of those who are more apt to cause harm.”

He then concluded: “We can no longer afford to do nothing. Every day that we delay, lives are on the line. Pennsylvanians are counting on you.”

Actually, this is what this is all about: taking guns away from law abiding gun owners. Every red flag law wants to work administratively, which is not law. It wants to steal people’s property on the basis of what they believe the person is thinking or may do, not a crime they are in the process of committing or have done.

In other words, Wold if pushing red flag gun confiscations “laws,” which are the same sort of pretended legislation our forefathers wrote about in the Declaration of Independence, that are nothing more than the very pre-crime initiatives advanced in Philip K. Dick‘s famous Minority Report.

Listen below and see how red flag laws are so unconstitutional that they violate nearly all of the first ten amendments to the Bill of Rights.

Oh, How The Mighty Are Fallen! (Video)

What Is Your Plan To Make It Through The Worst Global Food Crisis In Any Of Our Lifetimes?