Home»Politics»Generation Next: The Unlawful Cradle To Career Fascism Going On In The States
Politics

Generation Next: The Unlawful Cradle To Career Fascism Going On In The States

Anti Fed Ed Warriors, recently I was asked to do some digging into a group impacting education equity in NY State.  One of my followers who has been super about helping dig in the same places, was able to find a group rooted in MN. The connection, if any? The names used. In NY it was described as Generation Next, out of NY and contracting with a local county elementary school. The MN group is also called Generation Next and appears to be totally in State. So, let’s find out, shall we?

First Up, the MN Generation Next: 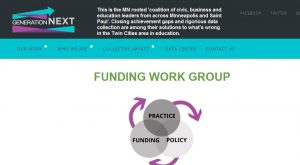 Generation Next believes there are 6 goals to making education in MN, attainable for all.

How? Using a Cradle to Career Framework and ‘rigorous data collection’ in:

The Cradle to Career Framework for MN (based in Rochester and to be expanded to every county) is the StriveTogether’s Framework. I’ve written about the global workforce based education connections to StriveTogether many times. StriveTogether uses the entire community as a sort of education nanny for ‘student success’.

Back in 2016, the ST website shared with the nation that 17 communities across the nation had been selected for ‘data analytics’. The data collected would help improve education for all at a local level. So, if you live in these communities, see if, since 2016, your educational systems have improved.

Also helping drive MN’s youngest learners toward globalism and workforce based education is the fact that dating back to the late 1980s/early 1990s, MN was used as a key State to totally begin the undermining of education as we knew it by involving the United Nations.

Since SEL (social and emotional learning) is such a terrible aspect of the globalization of education, as well as key mandated sections of ESSA (Every Student Succeeds Act), have a look at the data information from Generation Next (MN). (Remember, SEL targets your attitudes, values, and beliefs. Starting at PreK is very dangerous AND very wrong! 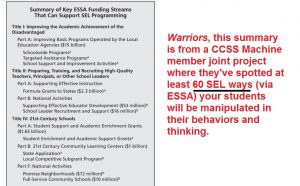 (Source for picture, above)

TRENDING:  BIRTHPLACE OF THE BILL OF RIGHTS WAS JUST DEMOLISHED BY A DEVELOPER

Warriors, this MN incorporated globally-minded education group (you can open the above image in a new screen, if you like) has been around since 2010. From the ‘About Us’ page, this excerpt: “Gen Next Education, Inc. was founded in 2010 by Girish Ballolla to bridge global education and to serve as the “last mile connection” between universities across the world and the Indian education ecosystem. Given the inherent challenges that Indian students face in accessing quality education along with the challenges universities face while navigating the complex web of India,..”

If you’d like to see this GN’s view on early education, be sure to read this blog entry. From 2014, this document reveals some of the intent of shifting education to an international one, mainly IB (International Baccalaureate) schools. I’ve shown you the author of the IB schools and also how IBs were part of ESSA’s mandates. 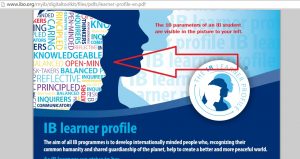 Lastly, Is A ‘Gen Next’ In NY Or Elsewhere?

Warriors, we’ve yet to see if the MN Gen Next is in NY. After combing through many NY school budgets and seeking to find a contract from this particular GN organization, I’ve not found one. I was also unsuccessful in finding any Generation Next group in all the places I looked. That stated, what I did see, is what we’re seeing everywhere, that SEL is not going away, especially for our littlest learners. It appears that several schools in NY are becoming ‘future-ready’ type schools. As a taxpayer in NY, if you’re not reading the line by line school budgets or attending those meetings, you need to!

I did succeed in finding a CA-based GenNext Group which has a foundation called the GenNext Foundation. This particular Foundation is large enough it has PACs (Political Action Committee) focused on equity, however, no live link is available to access what States these PACs may be in , or simply apply to CA. As far as the Group, they have a strong ‘core issue’ with the state of public education in America. The Foundation also shares this issue. The difference in this GenNext and all the others, it’s by invitation only that you get to become a member and difference maker. If you visit the Foundation’s education section, you’ll see social impact bonds are a tool. How bad are SIBs from an anti Common Core view? AWFUL!

Warriors, as you can see, many CCSS Machine groups have grabbed onto the idea of the next generation and are using it to a point of confusion. We know that the bottom line is, this ‘next generation’ of education is NOT academic-based whatsoever! It’s mind-bending skill-based garbage!

WATCH for my upcoming series of the USMCA (United States-Mexico-Canada Agreement). I’ve written before on how toxic it would of been for education IF it passed. Now that it’s on its way to the President’s desk to become law, I’m revisiting the massive document (hundreds of pages long) to bring you the most researched and documented proof of just how far We the People are being sold down the UN’s global river of shams.

Deadly Distractions: Laying the Groundwork for the Next Civil War

Generation Next: The Unlawful Cradle To Career Fascism Going On In The States