As sometimes happens when a government gets bigger than the means it was intended to be, when a journalist makes a Freedom Of Information Act (FOIA) request, that journalist may just be spinning the wheel for a bigger information article than he bargained for.  Such was the case with Curtis Waltman of Muckrock.com.  After filing a FOIA request in an investigation into Antifa and various white supremacist groups, he also got documents on government remove mind control.

In his report at Muckrock, Waltman recounts:

When you send thousands of FOIA requests, you are bound to get some very weird responses from time to time. Recently, we here at MuckRock had one of our most bizarre gets yet – Washington State Fusion Center’s accidental release of records on the effects of remote mind control.

As part of my ongoing project looking at fusion centers’ investigations into Antifa and various white supremacist groups, I filed a request with the WSFC. I got back many standard documents in response, including emails, intelligence briefings and bulletins, reposts from other fusion centers – and then there was one file titled “EM effects on human body.zip.”

Hmmm. What could that be? What does EM stand for and what is it doing to the human body? So I opened it up and took a look.

Below are a few of the documents that Waltman received.  Yeah, it’s not a conspiracy theory people.  It’s conspiracy reality.

The government has all kinds of secrets, but of course, that same government uses terms like “conspiracy theorists” in order to attempt to discredit those who expose what they have already admitted and been shown to be guilty of doing.

Waltman went on to elaborate, “EM stands for electromagnetic. What you are looking at here is “psycho-electronic” weapons that purportedly use electromagnetism to do a wide variety of horrible things to people, such as reading or writing your mind, causing intense pain, “rigor mortis,” or most heinous of all, itching.”

He added, “Now to be clear, the presence of these records (which were not created by the fusion center, and are not government documents) should not be seen as evidence that DHS possesses these devices, or even that such devices actually exist. Which is kind of unfortunate because ‘microwave hearing’ is a pretty cool line of technobabble to say out loud.” 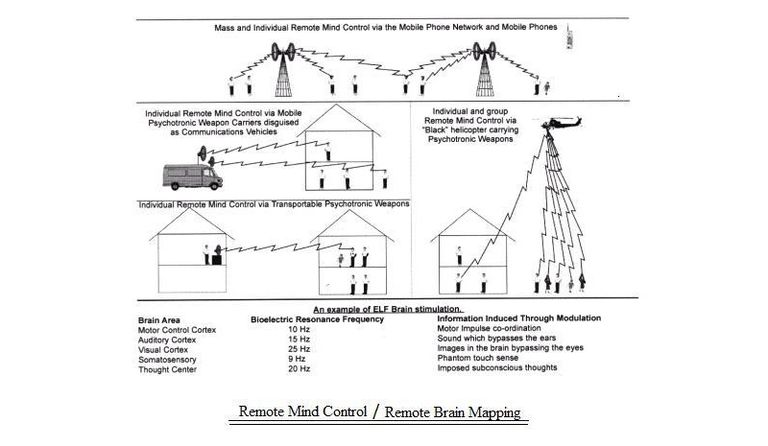 However, even more disturbing was the “remote brain mapping.”

Take a look at this visual. 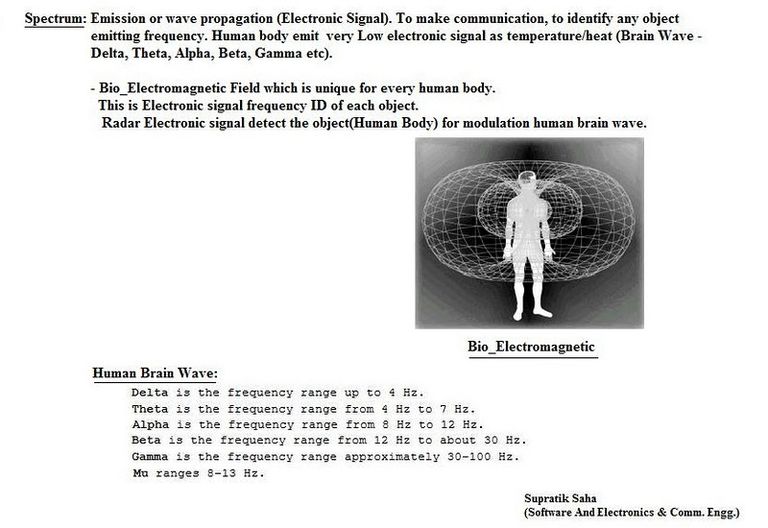 Waltman does write, “It’s difficult to source exactly where these images come from, but it’s obviously not government material. One seems to come from a person named “Supratik Saha,” who is identified as a software engineer, the brain mapping slide has no sourcing, and the image of the body being assaulted by psychotronic weapons is sourced from raven1.net, who apparently didn’t renew their domain.”

Well, that doesn’t mean it’s not part of a government project, as we know that a lot of unconstitutional and unlawful spending is funded to outside organizations and individuals.  Technically, while it may be these are not “government documents,” it seems clear enough that the people’s money was used to fund this project and research just like it was in MKUltra and other mind control projects linked above.

“It’s entirely unclear how this ended up in this release,” Waltman added.  “It could have been meant for another release, it could have been gathered for an upcoming WSFC report, or it could even be from the personal files of an intelligence officer that somehow got mixed up in the release. A call to the WSFC went unreturned as of press time, so until we hear back, their presence remains a mystery.”

At least some of the images appear to be part of an article in Nexus magazine describing a 1992 lawsuit brought by one John St. Clair Akewi against the NSA. Akewi claimed that the NSA had the “ability to assassinate US citizens covertly or run covert psychological control operations to cause subjects to be diagnosed with ill mental health” and was documenting their alleged methods.

Nexus was, and still is, an Australian magazine focused on the unexplained, conspiracy theories, alternative medicine and the like. It covered Akewi’s case in 1996 but was unable to get Akewi to discuss it further: “I tried ringing Mr Akwei to find out what was the out-come, if any, of his court case. He firmly but kindly told me that he could not speak about anything to do with the case over the phone and hung up,” reads an editor’s note at the end of the article.

Download the files for yourself and draw your own conclusions.

Business Leaders Are Begging Biden Not To Crash The Economy

This Video Inside A St. Louis Bar Demonstrates Why Gun Control Laws Limiting Where You Can Carry Are As Stupid As They Are Lawless

Forget the Russians: It’s the Federal Reserve Seeking to Meddle in Our Elections