Home»US»Ammunition Sales Skyrocket In Response To Coronavirus Panic
US

With all of the media coverage on coronavirus, one would expect such things as surgical masks

to be flying off the shelves… and they are!  However, what about ammunition?  Well, lo and behold!  Ammo is skyrocketing as a result of preparation for coronavirus.

Actually, it’s quite natural considering what may befall societies where work is impeded, and various operations and imports will be squeezed due to the “global nature” of commerce that we’ve been propagandized to believe in.  Ultimately this will put a strain on all of society, including food and medicine and people, by nature, will become desperate.

So, why not invest in a little more ammo, considering the current administration, unlike the previous usurping administration that was openly Marxist claims to be constitutional, continues to act unconstitutionally and attack your liberties?

In a recent report by Guns In The News:

Widener’s Reloading & Shooting Supply, an online ammunition retailer, experienced a 99.7 percent increase in website traffic from Feb. 23 to 25 (when compared to last year) and roughly double the sales. “It’s clear our customers want to be prepared in a worst-case scenario,” Jacob Long of Widener’s said. “For a lot of our families, a disaster plan includes having ammo on hand.”

Brick-and-mortar stores are experiencing a similar response, according Danny Garcia, manager of Money Quick Pawn and Guns in Fayetteville, NC. “We have seen a distinct increase in both handgun and rifle ammunition in the past few months,” he said. “February was a record sales month…Talking with our customers we are hearing the increase is due to both the prospect of a coronavirus outbreak and the pending elections.”

Ryan Repp, director of content and communications for Brownells said the company is experiencing something slightly different. “Our ammo sales are up a few points, but our emergency food and survival supplies sales are trending up higher even than ammo.”

Don’t expect cartridges to repeat the vanishing act like they did in 2013, though. Undoubtedly, the manufacturers anticipated the political rhetoric and are monitoring the viral demand. In addition, the company’s contacted indicated they have a generous supply on hand.

“We are in great supply for both ammo and emergency supplies,” Repp said. Garcia noted, “Our shelves and stockroom are full, and we have pre-ordered a very large amount of ammunition that should easily provide a steady flow of ammunition to our customers.”

The inventory situation is the same at Widener’s, although the company provided eye-opening figures readers in some regions should note. Orders from Michigan are up by 566 percent. Other states with enthusiasts buying at higher-than-normal rates include Connecticut (up 390 percent), Florida at (+383), Kentucky at (+304), and New Jersey (+241).

In a press release, the ammunition provider wrote, “As the Coronavirus (COVID-19) hits the US, it’s not just handsanitizer and flu medications that are flying off the shelves. While Walmart and Target are running out of emergency essentials and “currently unavailable” is popping up on various Amazon searches, the rush to be prepared has also reached the ammunition industry.”

The company provided a chart to substantiate their claims. 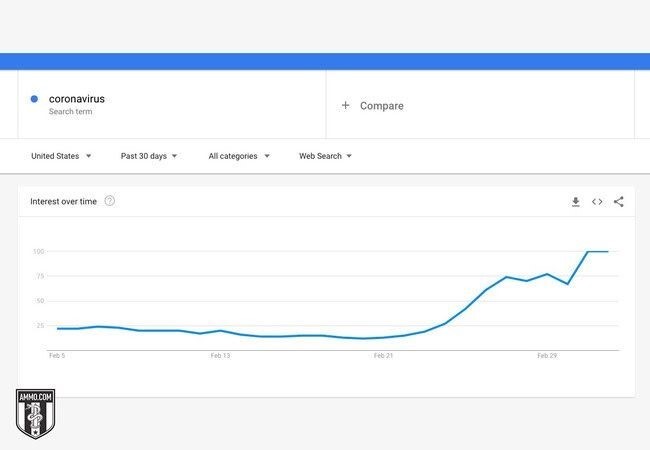 Recent analysis shows that online ammunition retailer, Ammo.com, has seen a significant increase in conversions and sales since February 23, 2020. The company reports that this surge corresponds with the public concern regarding the COVID-19 virus. According to Google
Trends, starting on February 23, American interest over time (the site’s measurement matrix) of the term “coronavirus” has quadrupled, increasing from 22 to 100.

When compared to the 11 days before February 23 (February 12 to 22), the 11 days after (February 23 to March 4), Ammo.com’s number of transactions increased 68% and the company has seen a conversation rate increase of 45%.

Alex Horsman, the marketing manager at Ammo.com, said of the surge, “We know certain things impact ammo sales, mostly political events or economic instability when people feel their rights may end up infringed, but this is our first experience with a virus leading to such a boost in
sales.” Horsman continued, “But it makes sense. A lot of our customers like to be prepared. And for many of them, it’s not just facemasks and TheraFlu. It’s knowing that no matter what happens, they can keep themselves and their families safe.”

When it comes to actual sales, Ammo.com’s increase varied among calibers and brands.

Calibers that saw the largest increase include:

Top sales increases in brands went to MBI ammo with a 179% increase and Federal ammo at 176%.

Sales also varied by state, with North Carolina and Georgia coming in with the largest increase (179% and 169% respectively). These were closely followed by Pennsylvania (140%) and Texas (128%).

Other states that saw a big boom are:

The company also mentioned that the price of gold has started to rise (5.35% in the last 30 days), which tends to correlate with an increase in the sales of ammunition. Interested parties can learn more about the connection through the company’s infographic: Are Guns and Ammo
the New Gold?, a 2011 data study.

You can purchase ammo at Ammo.com and get $15 off your first order by clicking here.

Indeed, gun sales continue to soar, and now ammo sales are doing the same in light of the media coverage of coronavirus.

I guess one way or another the economy will be driven.

The 5G Trojan Horse: Is This A Possible Explanation For Putting In Check The Coronavirus Narrative?

Is A New Financial Crisis & Economic Collapse On the Horizon Due To Coronavirus Outbreak?