Home»Politics»And The Show Goes On: The 116th’s Congressional Abuses In Education
Politics

And The Show Goes On: The 116th’s Congressional Abuses In Education

Greetings Anti Fed Ed Warriors! I am so glad you’ve been patient in waiting for the vital follow-up article to my last one, “Things to Come”. In that article I gave you clear evidence and action steps to combat those candidates who only seek to carry on the CCSS Machine’s mission. I also showed you how our current Session of Congress (the 116th) is just as dastardly as the overreaching corporations, non-profits, and, global groups are being when it comes to education. We’ve seen their ‘love’ for Common Core, all the rebrands and connectors, like CTE, Career Tech Education, and STEM (Science, Technology, Engineering, and, Math).

Warriors, every one of these agenda programs are killing our education system, from all angles, for all ages, and, in every school ‘choice’. For the remainder of this article, an in-depth look at the 116th’s Congressional abuses in education.

What do these 3 have to do with educratic overreaches?

All 3 are extensions or appropriations which impact education via funding.

For PL 116-4, it’s the TANF (Temporary Assistance for Needy Families). Warriors, here’s my link to all my articles on how these TANF funds are abused in the name of education.

Warriors, every Congress, as far back as I’ve been researching has passed this program. All at taxpayer expense. PL 116-93 also contains partnerships between the U.S. Dept. of Education and the U. S. Dept. of Defense, the U.S. Dept. of Justice, and, the NSF (National Science Foundation, which automatically means STEM).

Federal funds (aka taxpayer dollars) are also given for resident tuitions. However, the most alarming is that education funds go to the China/US Mutual Culture and Education Exchange of 1961. What does all this mean? Massive data collection and global agendas. To see the Exchange programs, visit the U.S. State Dept. website. 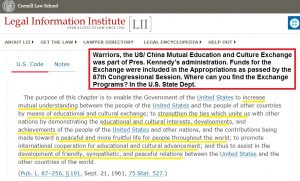 PL 116-93 also has a total of 12 related Bills. If you’d like to see what educratic overreaches are contained in those, go here.

As far as PL 116-94? ‘Education’ is embedded a whopping 287 times and has 81 related Bills! “Data” is embedded at least 88 times in this Public Law, as well. The screen shot below shows you the most troubling overreaches I found. Notice that U.S. Dept of Labor, the U.S. State Dept, and, the United Nations are all somehow connected in the American law.

(if you need to read it more clearly, open the image in a new page)

Bills Which Aren’t Laws Yet, But Could Become Such:

Warriors, here’s a list with short descriptions, as always, access the links for yourselves for your own understanding and discernment when protesting ANY and ALL education overreaches by our federal government!

HR 2740 is 650 pages, has had over 100 roll call votes. It’s passed the House and is now in the Senate as Calendar #140. Education (just under the U.S. Dept. of Ed) is to get $17 billion. Education overreaches from U.S. Dept of Labor and U.S. Dept of HHS (Health and Human Services) are separate. Labor will get $3.9 billion for WIOA/education related programs; HHS will get $1.6 billion in healthcare/education programs.

One Appropriations-like Bill from the Senate, S 1172 is the Keep our PACT Act (Keep Our Promises to America’s Children and Teachers Act) This ‘train wreck’ of a Bill would fully fund ESSA, Every Student Succeeds Act under Title One, Part A. The Bill will cost at least $19 billion and increase every fiscal year, until 2029, where federal funds will be $43 billion. The Bill uses ESSA’s former version, the ESEA (Elementary and Secondary Education Act of 1965, as well as IDEA (Individuals with Disabilities Act) parameters.

S 3028 (Partnerships for Affordability in Student Success Act) increases a federal-to-State partnership for post-secondary students. This Bill is one of the related bills to Public Law 116-93. Not only will this Bill expand the federal overreaches in education, it further creates grants for States to compete against each other for, as well as continue to align ALL education to workforce-prep.

HR 4706/S 2608 (Advancing CBE, Competency Based Education Act) these ‘sister bills’ do exactly what the title suggests, only at the post-secondary level of education. Why? You can’t have a ‘cradle to grave workforce trained society’ without aligning ALL education. These Bills not only allow for 3rd parties to assess your older children/students (or even yourself) for every CBE project they/you participate in, but will target certain student groups.
These Bills grandfather in existing assessment groups, use ‘best practices’, submits to the U.S. Dept. of Education, uses summative assessments in both aggregate and disaggregate data mining. Dual/concurrent enrolled students are assimilated into this CBE project completion. The CBE projects are under the direction of a would be new CBE National Council. Council members will be appointed by current DC agencies. In other words, Warriors, federal government expansion! Expect a price tag of at least $5 million.

HR 3793, Student Loan Accrual Support and Help Act (SLASH Act) will impact interest rates and provisions for student federal loans (Direct Stafford, Direct Unsubsidized Stafford, and Direct PLUS) on or after 7/1/2020. Another opportunity for education and economics to be united?

HR 4216, Strengthening FASFA Act will change allowances for dependent, independent, and, married students. Will also increase the number of semesters Pell Grants can be used in. This Bill is somewhat related to S 1885 (Aspire Act) that I wrote about in 2019. Be sure to refer to that article to see how the educratic overreaches will further mess with our national economy. Since FASFA relies on tax information, expect the U.S. Treasury to be involved somehow.

HR2065/S 1002, Affordable Loans for Any Student Act. This pair of Bills not only amends the HEA, but also seeks to increase how many students use a federally defined income based repayment plan. These will also seek to find ways to improve repayment options. Each Bill is around 105 pages, so I’m sure the options will contain many federal strings to mandate students’ lives.

HR 3792, The GRACE (Guaranteeing Respite After Graduation Ends) Act. This Bill would give a deferment option to students with federal loans before their repayment periods begin. This would apply to students with new loans on or after 7/1/2020. I’m sure this will be a great tool the government uses to promote their agenda in education.

HR 5148, Higher Education Standards Improvement Act. This Bill would lay out how education in post-secondary institutions would be improved in each State by the federal government as well as accrediting entities. It appears from the language used, that the States would have to be under the control of the accrediting bodies, and not be their own leaders of each State’s education. If you are concerned about the 10th Amendment of the U.S. Constitution, this is certainly a Bill to watch.

Bills Which Amend the IRS Tax Codes For Educational Abuse:

HR 1084, The Family Savings Act will use IRS tax code changes to allow parents to offset nationally approved apprenticeship costs in education, apply to qualified higher education expenses and qualified student loans. Also will go towards any educational related therapy a student needs to manage their disabilities. Dual enrolled students (often times homeschoolers) and certain on-line education expenses will also be involved. The biggest educational poison carrot this Bill packs is it expands how 529 (education saving accounts) plans are handled. I’ve included all my articles on how deceptive 529 Plans are being spun by the CCSS Machine.

S 448, Graduate Student Savings Act allow fellowships and stipend compensation to be used at IRAs (individual retirement accounts). This one bears watching to see how many Americans will try to abuse this ‘shortcut’ to retirement. Also, how will this impact cost of living, local economies, and the national taxpayer base?

S 220, The 529 Expansion and Modernization Act is fairly similar to the House’s 520 Plan Act above. However, this one expands 529s for use with all CTE (Career Tech Ed) programs, industry education (where industries get paid for their educational activities in expanding nationally registered apprenticeship (CTE/STEM) programs and allow for P3s (public private partnerships) to get involved in workforce based prep! Allows for any employer involved in all this to have tax credits, too. This Bill is nothing but workforce/economic development. Academics are an after-thought.

Warriors, that’s quite a collection of egregious governing, isn’t it? Let’s remember that each of these Bills are repugnant to our Constitution and should even be allowed to exist!

In my final look at what remaining Bills (already filed) the 116th has, you’ll not want to miss it. More expansion of federal government! More overreaches by the federal government into how America is run, as a nation, and, how every citizen in this nation is about to become an ‘education lab rat’.

Government: This is About America’s Safety - 18 Republican Governors Ask For More Muslim Refugees As “Christian Charity”

Why the States must Nullify the National Voter Registration Act Now!

And The Show Goes On: The 116th’s Congressional Abuses In Education