An otherwise healthy 52-year-old Australian cricket icon recently died. While the Mockingbird Media claimed it was due to “natural causes,” what sort of “natural causes” kill a 52-year-old athlete? On top of that, it’s right after he not only gets the experimental COVID shot but encourages other to do so and “learn to live with it.” He’s no longer here to see the effects of his foolish endorsement.

Another life has been cut short due to both ignorance and lies. Those pushing these shots need to be brought to justice for their crimes against the people, and now!

KOH SAMUI, THAILAND — A 52-year-old cricket legend, known as “The King” to his Australian fans, has passed away in yet another death after virtue signaling.

This blogger is not going to pretend to know anything about cricket. But a crash course in the sport was conducted before writing this article to understand the full picture. A combination of baseball and soccer is a crude way to describe cricket to someone who knows nothing about it.

Each cricket team consists of 12 players, including one reserve. The bowler is the functional equivalent of a pitcher in baseball. Mr. Shane Warne is considered one of the best bowlers in cricket history. Bowlers propel (“deliver”) the ball towards the batters and wickets in a very specific way. If they simply “throw” the ball, it’s a penalty. It’s also a penalty if you release the ball too early or too late on the approach.

If it looks unnatural for humans to do this, that’s because it is. Many cricket bowlers develop back issues both during their career and later in life. Batters are not only trying to hit the ball, but also prevent the ball from hitting the wicket behind them – like a goalie. If the ball hits the wicket, that batter is out of the game. If the player hits the ball, he and the other batter run back and forth to score runs.

This video by Ninh Ly explains the rest.

Cricket is most popular in Australia, Bangladesh, India, Pakistan, South Africa and the U.K. One game of Test cricket can span days. The longest game in history, between South Africa and England in 1939, lasted 12 days (and ended in a tie).

Mr. Warne played international cricket from 1992 to 2007. He is second all-time in cricket history with 708 wickets – meaning he hit the wicket and dismissed the batter, or, like his 500th wicket, when the ball is popped up in the air and caught like a fly ball in baseball. Only Sri Lanka’s Muttiah Muralitharan (800 Test wickets) is ahead of him. Australia has won five Cricket World Cup titles. Mr. Warne was part of the 1999 championship team. Australia has more Cricket World Cup titles than any other country. India (2) and the West Indies (2) are the only other teams with more than one title.

Mr. Warne continued playing cricket in the Indian Premier League and for the Melbourne Stars from 2008 to 2013. The Stars are in Australia’s Big Bash League, with a Twenty20 format (a shortened game). He officially retired from the sport altogether in 2013. Mr. Warne was inducted into the International Cricket Council Hall of Fame in 2012-13.

Life outside of cricket

Mr. Warne, like many great athletes, lived quite the life. He was married for 10 years (1995 to 2005), and had three kids from that relationship. Mr. Warne began dating British actress Elizabeth Hurley in 2010. But reports surfaced of Mr. Warne “sexting” another woman just weeks into his relationships with Ms. Hurley. The two apparently put their difference aside and were engaged in October 2011. They never tied the knot, announcing their split right before Christmas in 2013.

The Shane Warne Foundation was launched in 2004. Its mission was to help underprivileged kids. The charity held many lavish events that featured celebrities and $200 per plate dinners. But a January 2016 report by The Guardian found that the charity was only using 16 cents for every dollar raised for actual charity work.

The Sydney Morning Herald reported in February 2016 that the charity had all kinds of financial and nepotism problems. Mr. Warne’s brother was CEO for a while; and the foundation rented office space in buildings owned by his parents. The foundation officially shuttered in March 2016.

But Mr. Warne wasn’t just an adulterer, drug cheat and money grub as many of his detractors labeled him. His sheer presence in Sri Lanka after the 2004 Boxing Day Tsunami that killed 230,000 people, including 40,000 people in Sri Lanka, helped the victims escape from reality, if only temporarily.

Mr. Warne also owned a company called SevenZeroEight Gin, a play on his 708 Test wickets. The company sells its signature gin and a few other alcohol products. 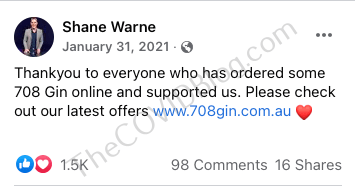 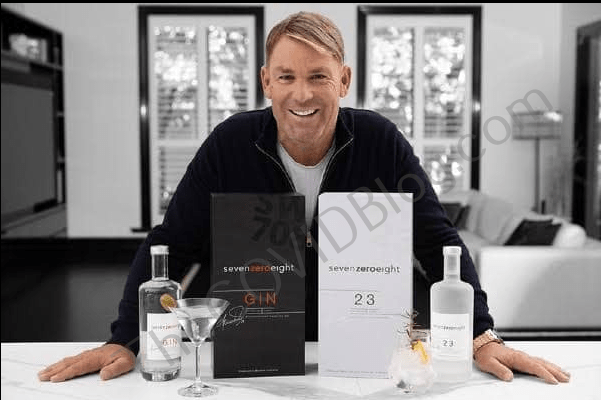 He worked on several television projects. But his television bread-and-butter was cricket commentary. He worked for both Fox Cricket and Sky Sports as of 2022.

It’s unclear when exactly Mr. Warne received his two injections. But based on the evidence, we can assume he received his second one by mid-July 2021. He did a Sky News interview last July. Here are some of the lowlights:

Mr. Warne was talking about his experience in the U.K. and how Australians need to follow the same path. He also talked about having to “quarantine” for 14 days in one of those Australia COVID prisons when he returned from international travel. Instead of using his voice to oppose it, he said, “those are the rules, there’s no exceptions, and it should be like that.”

An August 2 tweet indicated Mr. Warne tested positive for so-called COVID-19 despite being “double vaccinated.” He said “[the] symptoms are mild.” 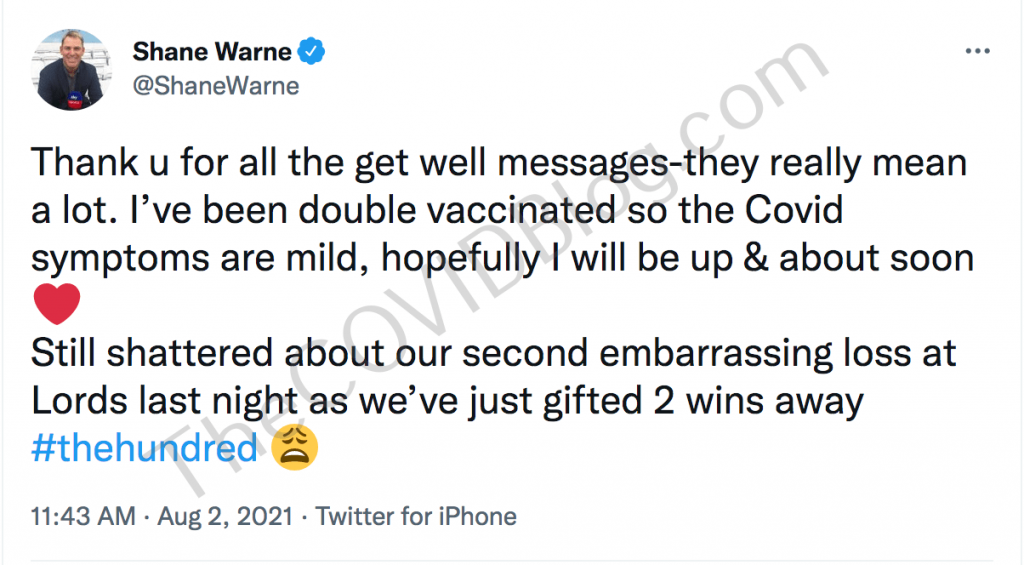 Mr. Warne spoke further about his illness in a September 23 interview with Perth Now:

“I have apparently got the holy grail. I have been double vaccinated and I have had COVID, so I am meant to be absolutely fine now.”

He reported having headaches and flu-like symptoms. So instead of taking high-dose vitamin D, drinking orange juice and resting, Mr. Warne volunteered himself to be a guinea pig with a “special ventilator.” He then repeated his sentiments from the Sky News interview.

“It is everyone’s choice to get vaccinated or not, but to me it is pretty simple. Get vaccinated has to be the message to everyone so we can get back to some sort of normality.”

Mr. Warne then said he was confused about Australia’s quarantine rules for international travelers in late October. 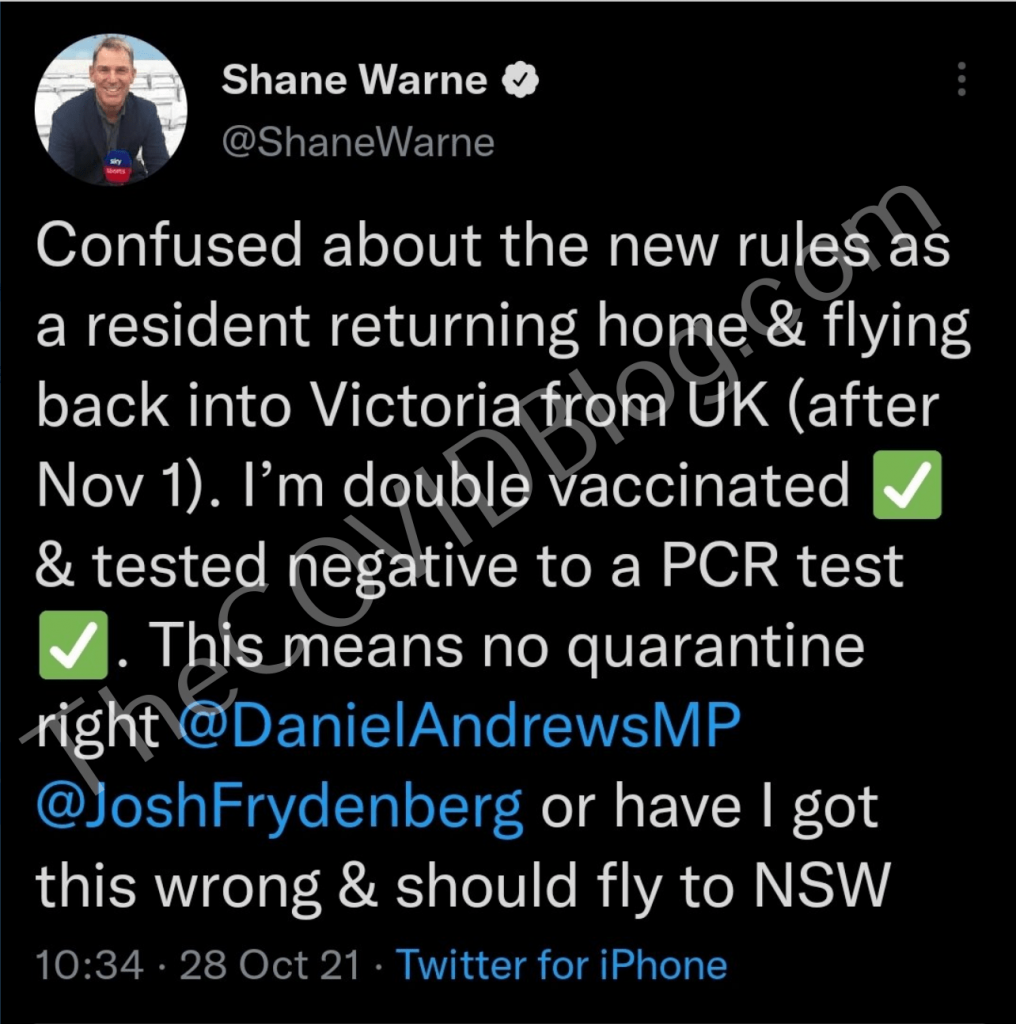 He also took several digs at non-vaccinated, Serbian tennis superstar Novak Djokovic in response to that whole mess during the Aussie Open in January.

It’s unclear if Mr. Warne received a booster shot at some point. The “Twitterverse” is claiming he had the booster days or weeks before his trip. There’s no public evidence of it. But booster shots are now required for Aussies to be considered “fully vaccinated.”

Mr. Warne arrived on the island of Koh Samui in Thailand to celebrate a holiday on March 1, according to The Guardian. He and three friends rented a private home that they planned on staying in for three months. Mr. Warne reportedly suffered chest pains before arriving in Thailand.

He and one of the friends had massages around 4 p.m. on Friday, March 4. They returned to the villa and got ready for dinner and drinks. But Mr. Warne did not show up for said dinner. His friends went to his room, only to find him unresponsive in his bed, with vomit on the floor. They performed CPR for over 20 minutes, but it was too late. Mr. Warne was pronounced dead less than an hour later at Thai International Hospital. Several outlets reported that the cause of death was a heart attack. 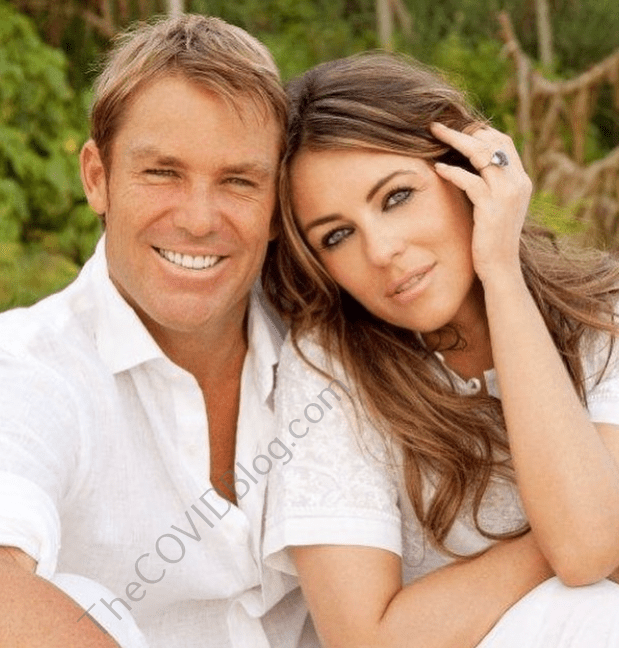 The Victoria government plans to hold a state funeral for Mr. Warne. There is already a statue of Mr. Warne at Melbourne Cricket Ground (MCG). The Great Southern Stand at MCG is being renamed S.K. Warne Stand. His body is currently being repatriated to Australia.

Do Not Resuscitate Orders: Turning Hospitals Into Death Camps