Over the weekend, internet sleuths on 4Chan’s /pol/ message board claimed to have decrypted Hunter Biden’s iPhone account using a tool called Backup Extractor. A subsequent storm of videos, photos, and other damning information was then posted on the internet.

As TFTP reported this week, putting aside the fact that this information showed that Hunter Biden was engaged in human trafficking — with multiple prostitutes — and eerily filming a drug buy, one would think that multiple videos of an individual engaging in purchasing a large amount of crack would lead to their prosecution under the law. But if you’re the president’s son that is not the case. This is likely the reason he filmed it — he knew that no matter what, he won’t be going to jail for it, so may as well document it.

Frequently readers of the Free Thought Project know that it is our belief that no one should be in jail for any substance they wish to put in their own bodies. My body my choice does not stop at abortion. Nor should anyone be in jail for selling or buying sex from mutually accepting parties.

That being said, the idea of the president’s son filming himself with multiple prostitutes, buying drugs, and other illicit activities is certainly newsworthy. And, had this been anyone the media and big tech considered a political rival — rest assured that these videos, images, and texts would have been rammed down our throats 24/7.

Instead, it is being censored, silenced, and covered up by big tech and the corporate media.

When the leaks first dropped, #HunterBiden began trending on Twitter and the information could be seen rather easily. But by Tuesday, and in spite of more information coming out, Twitter had seemingly taken action to prevent its spread.

Google took similar action but far more obvious, showing users a notification box when they searched for this information. TFTP was shown this box as well as millions of others who searched for “Hunter Biden Crack.” 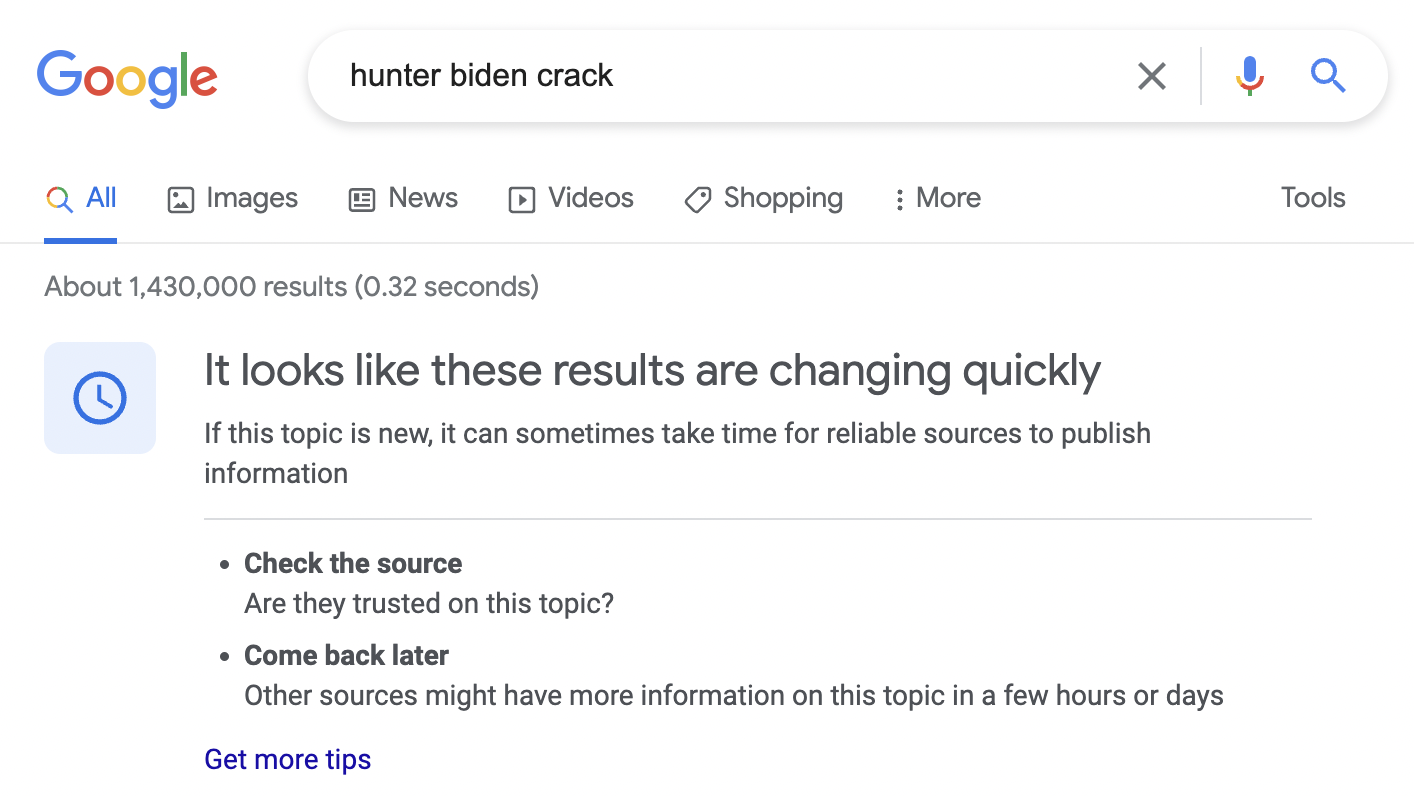 Google claims this action is part of the company’s attempt to “boost information literacy” when news is rapidly evolving. “These notices automatically appear when our systems detect that a topic is rapidly evolving, like in a breaking news situation, and a range of sources have not yet weighed in,” Google spokesperson Ned Adriance told The Verge. “There is no manual triggering involved … Our automated search systems don’t understand the political ideology of content, and it’s not a ranking factor for search results.”

There are still no results from mainstream outlets returning in Google’s search results for the leak, though the message is now gone. Not until Elon Musk tweeted out a meme did a couple of sources like the NY Post and Daily Mail pick up on the leaks.

Just last month, as the Daily Mail reported, a leaked voicemail from Joe Biden to his son was published in which Joe told his son “I think you’re clear,” about a NY Times article on his Chinese business dealings — which Joe Biden said he knew nothing about. This proved he actually did speak to his son about his relationship with a Chinese criminal, Ye Jianming, his son dubbed the ‘spy chief of China,’ despite saying otherwise.

“Hey pal, it’s Dad. It’s 8:15 on Wednesday night. If you get a chance just give me a call. Nothing urgent. I just wanted to talk to you,” the president reportedly said.

“I thought the article released online, it’s going to be printed tomorrow in the Times, was good. I think you’re clear. And anyway if you get a chance give me a call, I love you,” he added.

According to the NY Times, during Biden’s time as the Vice President, Ye became highly intertwined with Washington insiders — including Hunter Biden.

An aide to Mr. Ye met the vice president’s second son, Hunter Biden, in Washington. Mr. Ye then met privately with Hunter Biden at a hotel in Miami in May 2017, according to people with direct knowledge of the meetings who were not authorized to speak publicly because the meetings were private. Mr. Ye proposed a partnership to invest in American infrastructure and energy deals, the people said.

During this period, the vice president’s son was managing Rosemont Seneca Partners, an investment firm he formed with Chris Heinz, the stepson of John Kerry, the former secretary of state.

Joe Biden claimed that he never spoke to his son about these business dealings but somehow, he had prior knowledge of this article which detailed his son’s business dealings and called to tell him that it was going to be okay.

After the voicemail was published, the White House press secretary was pressed about the president’s claims that he’d never spoken to his son about foreign business deals.

This was clearly not the case, according to the voicemail.

When some of these videos were made, Hunter was meeting with a Chinese “spy chief” with a history of corruption who has since been “disappeared” by the Chinese government. Certainly this poses a security risk which news outlets should report on — yet here we are.

It is important to point out that TFTP is not ridiculing or attacking Hunter Biden for his addiction or his penchant for buying prostitutes. For years, TFTP has argued for an end to the war on drugs and the legalization of consensual sex in exchange for money.

That being said, Hunter Biden engaging in these activities while his father is in the White House certainly posed a security risk and at the very minimum should have been reported in the press. The fact that they are remaining silent while big tech runs cover for him, tells us who these companies actually work for, and it certainly isn’t you and me.

Our Future Is At Stake: The Climate Agenda’s True Power & Supreme Court Ruling on EPA