Anti Fed Ed Warriors, we know many hours have been devoted to peeling back the layers of educratic doublespeak.

For example, we were told and sold that ‘personalized learning’ would cater to Johnny and Suzy’s every need when it came to academics.  The sales pitch was to leave us with the idea that instead of a one-size-fits-all that Common Core gave us, we’d get ‘results may vary’ in education via College/Career Readiness (CCR). Trouble is many Americans bought into this BS with ESSA, Every Student Succeeds Act.

However, my research, and research from other Anti Fed Ed Warriors, has proven that CCR IS STILL CCSS! So, any and all illusions of one-size-fitting-all being ‘killed’ by ESSA are 100% fallacy! 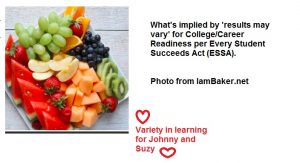 I know you’ve hear other phrases which have been carefully spun to leave our nation with the mindset that this ‘lifelong learning’ is what will improve upon everything and anything traditional or ‘old school’. There has been a big propaganda campaign by the CCSS Machine, which has been unleashed on us for years.

But, Warriors, did you know that the CCSS Machine is coming out with a ‘new and improved’ propaganda campaign to totally sink ‘traditional learning’ of ANY kind? 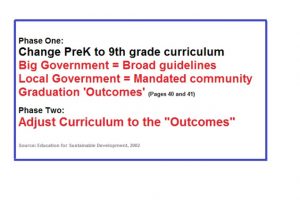 (Source of above visual. The original article this takes you to will have 3 broken links. I’ll provide those links in “Related Resources”, below.)

Bring On The ‘Binge’:

That’s right Warriors, Strayer University has developed “Binge Learning” to engage your brain more.
According to their research, our brains are hard-wired to be actively engaged so we take in more education.
However, consider that TOO much on-line viewing is bad for our health.

Warriors, let me pause here. Strayer University is supposedly for adults and adult learning. What does this have to do with K-12th grade education? ESSA was 100% clear about the community being conformed to the meet the needs of student engagement for better ‘outcomes’. Outcomes is on the screen shot above, lower right hand side.
Anytime, especially in education, you see that word, it’s code for mandated results you must achieve in order to graduate or advance to the next certificate level.

By Strayer tweaking on-line learning to ‘binge-worthiness’, it’s giving a nod to the innovation and technology mandates of WIOA (Workforce Innovation and Opportunity Act), which ESSA codified and expanded. ESSA also codified the existing version of HEA (Higher Education Act). All 3 of these laws are united to do ONE THING: force a cradle to grave workforce system.

*Think of it this way, since K-12th education had to change from ‘old school’ to 21st Century learning, higher education has to as well, or the chain will be broken!

According to Strayer’s website, they ‘pioneered’ on-line learning in higher education. (1996 to be exact)
Because Strayer is a chain type of educational institution, certain physical university hubs are spread across the nation. To see more ‘about Strayer’, go here.
Sounds great, doesn’t it? From wherever you live, you can sit in front of a screen in your home and take college level classes. The sales pitch leaves out these warnings, though:
a) too much screen time is unhealthy at any age
b) with on-line courses comes on-line assessing and data tracking
c) hybrid learning (some on-line, some at the physical location) is also a CCSS Machine move. What’s so bad about that, after all, I’m saving money and not polluting the planet! Hybrid learning actually plays into MORE federal government control in education, NOT LESS!
d) on-line learning gives your personal data to a plethora of P3s (public private institutions) in education and also involves more federal overreaches into your ‘personal learning’.

According to the Strayer Studio Report, ‘binge learning’ has been in the works since 2015. So why, are we beginning to see TV ads to promote ‘binge learning’? Because, even after 4 years, the Higher Education Act is not quite ready to be reauthorized by Congress.

So if the CCSS Machine can influence you, the general public on how out-dated and bad traditional education is, the more supportive you’ll be when it comes time to express your stances to your elected officials.

In My Researched Opinion:

By running ads during the Christmas season, the hope is to boost interest in applying to Strayer. The more folks who apply, the more income Strayer can make. It also is part of the current promotion to supply new students with free laptops (gee, where have we seen this move before?) Of course, with all the hype the ads have, the more all those families spending quality time together around the TV will accept the money saving aspect, if not the ‘green aspect’ of ‘binge learning’.

To see the 2018 Standards, go here. (*Note: these are standards for being eligible to be accredited by MSCHE.)

To see the alignment between business (workforce) and education Strayer supports, go here. (*Note: scroll down to see the two pictures and ‘learn more’).

If you’d like to see the other accrediting bodies Strayer is tied to, go here.

Because learning from a seasoned professor via a chalkboard is boring, Binge can help.
Because Americans must ditch ‘old school’.
Strayer leaders shifting the conversation in education/technology.

1) The UN’s Sustainable Development Goals (SDGs) Tool Kit (Where education as THE change agent is being used against us, especially in technology)
2) UNESCO’s “Beyond 2015 Document” (Where lifelong learning can be found, as well as the mind-numbing addictions to a ‘greater global good’)
3) UNESCO’s “2014-2021 Medium Term Strategy Plan“ (Just how close to fruition are we in the USA?)

Warriors, I’m not sure about you, but a ‘new and improved’ education which embeds mind-numbing and is video dependent bends more toward addicting us to being told what to do, what to believe, and, how to live; than expanding our knowledge. Adding ‘binge’ to education also is not smart. “Binging” has more been associated with bad habits than increasing academics.

Webster’s Dictionary defines ‘binge’ as a drunken spree. So, while Strayer’s hyping up the binge worthiness of education, I hope we can remain sober enough to expose how bad this shift truly is.