It’s pretty incredible that the one company that told us they could hack your DNA and manipulate it, which the Mockingbird Media attempted to say they said no such thing, actually patented a sequence three years before the CONvid-1984 began that was found in DNA in the alleged “virus,” which has never even been proven to exist.

The Daily Mail has the story.

Fresh suspicion that Covid may have been tinkered with in a lab emerged today after scientists found genetic material owned by Moderna in the virus’s spike protein.

They identified a tiny snippet of code that is identical to part of a gene patented by the vaccine maker three years before the pandemic.

It was discovered in SARS-CoV-2’s unique furin cleavage site, the part that makes it so good at infecting people and separates it from other coronaviruses.

The structure has been one of the focal points of debate about the virus’s origin, with some scientists claiming it could not have been acquired naturally.

The international team of researchers suggest the virus may have mutated to have a furin cleavage site during experiments on human cells in a lab.

They claim there is a one-in-three-trillion chance Moderna’s sequence randomly appeared through natural evolution.

But there is some debate about whether the match is as rare as the study claims, with other experts describing it as a ‘quirky’ coincidence rather than a ‘smoking gun’. 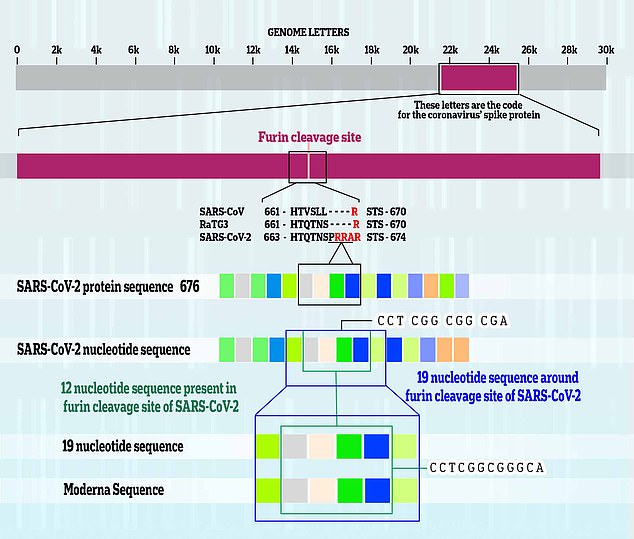 SARS-CoV-2, which causes Covid, carries all the information needed for it to spread in around 30,000 letters of genetic code, known as RNA. The virus shares a sequence of 19 specific letters with a genetic section owned by Moderna. Twelve of the shared letters make up the structure of Covid’s furin cleavage site, with the rest being a match with nucleotides on a nearby part of the genome 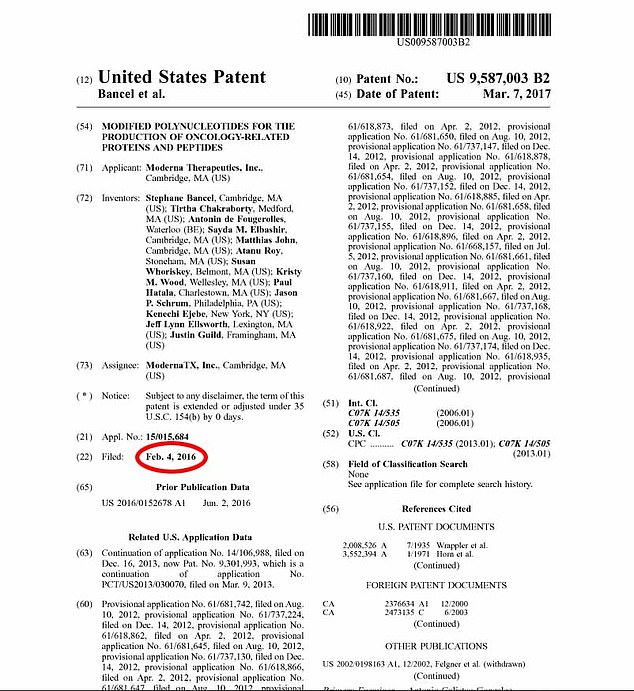 Moderna filed the patent in February 2016 as part of its cancer research division, records show. The patented sequence is part of a gene called MSH3 that is known to affect how damaged cells repair themselves in the body. It was approved on March 7 the following year

In the latest study, published in Frontiers in Virology, researchers compared Covid’s makeup to millions of sequenced proteins on an online database.

The virus is made up of 30,000 letters of genetic code that carry the information it needs to spread, known as nucleotides.

It is the only coronavirus of its type to carry 12 unique letters that allow its spike protein to be activated by a common enzyme called furin, allowing it to spread between human cells with ease.

Analysis of the original Covid genome found the virus shares a sequence of 19 specific letters with a genetic section owned by Moderna, which has a total of 3,300 nucleotides.

The US-based pharmaceutical firm filed the patent in February 2016 as part of its cancer research division, records show.

The patented sequence is part of a gene called MSH3 that is known to affect how damaged cells repair themselves in the body.

Scientists have highlighted this pathway as a potential target for new cancer treatments.

Twelve of the shared letters make up the structure of Covid’s furin cleavage site, with the rest being a match with nucleotides on a nearby part of the genome.

Writing in the paper, led by Dr Balamurali Ambati, from the University of Oregon, the researchers said the matching code may have originally been introduced to the Covid genome through infected human cells expressing the MSH3 gene.

Professor Lawrence Young, a virologist at Warwick University, admitted the latest finding was interesting but claimed it was not significant enough to suggest lab manipulation.

We’ve covered the fact that the alleged COVID tests could practically find COVID in anyone seeing that the SARS-CoV-2 has never been isolated or purified and that the sequence generated by a computer contains human genome 8! Additionally, it has now been confirmed that the tests were never to determine COVID but have been DNA samples sent off to China!

If you have not figured out how you are being manipulated by this scamdemic by now, chances are you will never find out and you will go to your grave a lamb led to the slaughter.

Is American Law The Law Of The Land Or The Noahide Laws?

Mayor Heckled To The Point Of No Return: Does This Look & Sound Like She Was Voted In By The People? (Video)

The Enemy Is In Our Midst (Video)

1 Day After Reporting On US Biolabs In Ukraine, US Embassy Scrubs All Ukraine Bioweapon Lab Docs From Website (Video)