This is exactly how the game is played in politics all the time, and it doesn’t matter if it’s a Republican or a Democrat.  They usurp their authority and when it goes bad, they point the finger at everyone else rather than accept the blame for their actions.  New York Governor Andrew Cuomo, whose tyrannical actions have cost the people of the united States, especially those of New York untold billions of dollars and lives in his response to the coronavirus plandemic now has the audacity to blame nursing homes for following his unlawful orders. 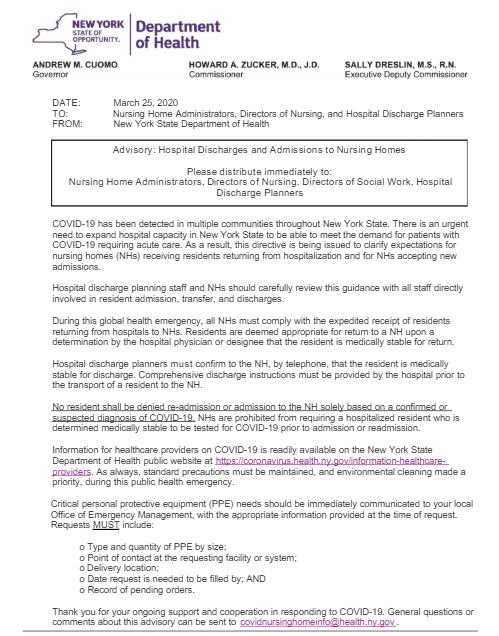 On Wednesday at a press conference, Cuomo attempted to deflect the claims of 5,800 nursing home deaths due to coronavirus, which is largely exaggerated and we all know it, away from his executive order and onto those that followed it.

Cuomo is now blaming nursing homes for not defying his orders: pic.twitter.com/Rqs6Gr99ox

“The obligation is on the nursing home to say ‘I can’t take a COVID-positive person. I’m too crowded, I’m too busy, I don’t have enough PPE,’ whatever the answer is, doesn’t even matter,” Cuomo told reporters.

Cuomo has been defending, downplaying, and deflecting his order to force nursing homes across New York to take in 4,500 COVID-19 patients to lessen the burden at hospitals after it was revealed that a fifth of nursing home deaths came from the state.

Cuomo blamed President Trump and the CDC guidelines for his March 26 order, saying he was just following the president’s guidelines.

But New York, in addition to California and New Jersey, turned CDC guidelines into state directives that forbade facilities to turn away patients even if they’ve had COVID-19.

“CDC guidelines require any newly admitted and readmitted resident with a COVID-19 case to be placed in a designated COVID-19 care unit, while those who have met the criteria to have recovered can return to a regular unit in the nursing home. The March 13 guidance that Cuomo’s office cited says ‘a nursing home can accept a resident diagnosed with COVID-19… as long as the facility can follow CDC guidance.’ New York – along with California and New Jersey – went further and turned the guidance into state directives and said at the time that nursing homes cannot refuse to take patients from hospitals solely because they have the coronavirus.”

The order had specifically said: “No resident shall be denied readmission or admission to the NH solely based on a confirmed or suspected diagnosis of COVID-19,” which contradicts what Cuomo told reporters.

Prepping 301: Water Solutions – Tips For Making Sure You & Your Family Have Water You Need (Video)