Home»US»Control Over Idaho Water – Part 2
US

The Lemhi River is 60 miles long, as a tributary flows northwest to the Salmon River, feeding into the Snake River,  and ultimately flows into the Columbia River.

Below is a map of Lemhi River Basin tributaries that are priority areas for conservation.  Multiple ranches are dependent on this water for livestock grazing and agriculture.  Those who are involved in gaining control over water for fish claim grazing “degrades the riparian vegetation and streambank stability” and “dewatering of the lower river can delay anadromous smolt and adult migrations” occurs from irrigation practices. 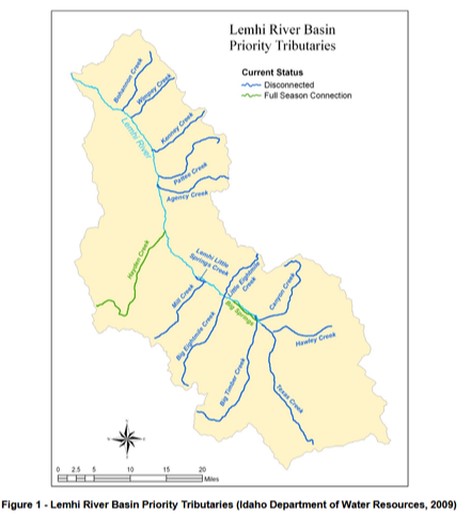 As noted in part 1, multiple organizations are involved in this pursuit of protecting fish, it is all about saving the fish, at the expense of not only the taxpayer, but to livelihoods.

Merrill Beyeler, a former Idaho legislator, Lemhi Regional Land Trust (LRLT) Chairman, Idaho Business for the Outdoors board member, Salmon Work Group member, Central Idaho Rangelands Network member which partners with The Nature Conservancy (TNC) and LRLT, and High Divide Collaborative Coordinating Committee member whose mission is conserving land as part of the Heart of the Rockies Initiative is one benefactor of this plot.

As part of the Upper Lemhi River Acquisition project, in 2010, Mr. Beyeler was paid $3,426,523 for his conservation easement according to this Columbia Basin Fish & Wildlife program document.  The description of the easement agreement follows:

In other words, Mr. Beyeler “entered into a conservation easement with The Nature Conservancy…which…allowed him to purchase another ranch with an existing easement, almost doubling the size of his property.”  Not bad, over $3 million dollars in his pocket and an expansion of his ranch, including an award.  In this CE agreement, Mr. Beyeler agreed to a 20-year restoration project that “consolidates diversions…from the main stem of the lemhi rather than from several of its local tributaries.”  Mr. Beyeler has a knack for using other funding sources to his benefit, including the taxpayer footing the bill.  The Columbia Basin Fish & Wildlife program targets land acquisition from 2010-2032.  The consolidation of diversions achieves the objective laid out by the Northwest Power & Conservation Council (NWPCC) to
reconnect “tributary streams to the Lemhi River.”

LRLT bought a CE near Leadore to “permanently protect nearly 10 miles of in-stream and riparian habitat” through a habitat management plan.  As more land is taken for fish habitat restoration through CE, expectations for fish protection weighs heavily on other landowners.  The unelected Idaho Water Resources Board (IWRB) is pouring thousands of dollars into changing irrigation practices, allocating it to private landowners for fish habitat restoration projects.  Once again, the federal outfit BPA, is funding this activity.  What happens if a private landowner chooses to not participate?  Now, water rights are involved.  Water law is extremely complex, however, even though this article focuses on the Lemhi River, this issue is applicable to every Idahoan that hold water rights.

The Snake River Basin Adjudication (SRBA) was a litigious case that began in 1987 and finally settled in 2014.  It determined that priority of water rights “must be quantified” making water rights more clearly defined for administration.   One of the affected areas in SRBA was the Lemhi basin, Water District 170, and its associated water districts.  Up to this point, water rights were established by diverting the water and putting it to beneficial use such as the Big timber Creek, first decreed in 1912, and being measured every year since. This document gives an in-depth explanation of SRBA.

Water District 170 was implemented for the express purpose of identifying any and all illegal uses of water, taking our high flow rights, and requiring the measuring of groundwater.  As a result of the SRBA, Lemhi Basin 74 was required to participate, and in 2017, IDWR proposed an expansion of Water District 170 by combining 12 active water districts within Administrative Basin 74, and placing the administration of those water rights under IDWR, out of the hands of the water districts themselves.  The SRBA Basin 74 General Provisions included a provision that 27 tributary streams be administered separately from all other water rights and that diversion and high flow use, such as spring runoff, could be diverted for beneficial use, with existing water rights satisfied.  Historically, Lemhi water districts have been properly managing and administering tributary streams to the Lemhi River, but with this proposal, these water districts are being reduced to subdistricts, with IDWR taking over the administration of those districts, including control over the measuring and accounting for groundwater diversions, traditionally conducted by the water districts.

Under the administration of IDWR, there could be a demand for additional restrictions for future high flow diversions.  These high flow periods are needed by ranchers for agricultural purposes, a beneficial use.  If IDWR diverts that water it would cause economic devastation to those ranchers.  Or perhaps IDWR is looking at it from a perspective of fish.  As previously noted, blame is laid upon ranchers for “dewatering” tributary streams, claiming it affects fish habitat.  However, in the 2004 BOR Instream Flow Assessment study, it states, “fish populations continue to exist within available physical habitat throughout the year” which does not substantiate the need to deny water rights for fish.  High flow water is especially needed because there is no storage system, such as a dam, that will provide the necessary water for irrigation as needed.  The issue of high flow water use was adjudicated in SRBA, reaffirming the Lemhi high flow practice through inclusion of the Basin 74 General Provisions.

Since water rights are considered real property in Idaho, an analogy would be the state deciding to combine your property with your neighbor, then dictating how that property could be used.  There could be nothing more sinister towards property rights.  When discussing approval of water right applications in the Upper Salmon Basin Watershed June 6, 2019 meeting notes, IWRB expressed concern “…that transacted water for reconnects such as Big Timber Creek could once again be dewatered if these new water rights are used, particularly on the shoulder seasons.”  At the same meeting, Mr. Beyeler was soaking up more funds for fish restoration projects.  Amy Cassel, IDWR, noted spring water runoff is acceptable.  However, it has always been unappropriated water, meaning not approved as a water right.  If unappropriated, is IDWR planning to take that water only for fish habitat use, devastating the livelihoods of those who are dependent on that water?

At the Idaho Water Resource Board (IWRB) July 25, 2019, meeting, a resolution was proposed that “would authorize staff and counsel to retain technical consultants and experts to support the Board’s protests to applications for permits to divert from tributaries to the Upper Lemhi River.”  Clearly the intent here was using more of your tax dollar to fight Idahoans with legal water rights who objected to the IDWR proposal to take the use of their water rights away from them.

As a result of this IDWR proposal, major adverse changes to water rights are being proposed that do not align with the SRBA Basin 74 General Provisions.

Idaho Code § 42-604 referenced in the order states, “The director may…combine two (2) or more water districts by entry of an order if such action is required in order to properly administer uses of the water resource.  Water rights users in Basin 74 were properly administering water resources.  Again, this is akin to the state combining and assuming control over private property use.

Idaho Statute 42-1736B states, “All water plans and development projects proposed by the water resource board shall be subject to review and approval of the legislature” and “To take all necessary actions to assure that Idaho citizens shall not be denied the right to divert and appropriate to beneficial uses.”  This IDWR proposal was never presented to the legislature for approval, they just moved forward with it.  On January 20, 2020, IDWR attempted to do an end-run around the SRBA Basin 74 General Provisions for separate tributaries legislatively, essentially tying them all to the Lemhi River, and comingling them.  Legal action by ranchers was successful in stopping this, at least for now.  Clearly, the IDWR objective is taking control over water rights for their, and others, pursuit of fish habitat restoration, even if it means violating Idaho statutes.

Objections to this action by private landowners with water rights were ignored.

Statement of Public Witnesses by Tim Brown on Scribd

It appears that if private landowners do not engage in the quest to restore fish habitats through a CE or other restoration projects, the next step is to devise a way in which the state takes control over the use of water rights.  With the amount of money and partnerships behind fish and habitat restoration, perhaps IDWR will ultimately do the same by combining tributaries for fish and diversion into the Lemhi River.  This action will ultimately destroy a landowner’s right to use water for beneficial use, and destroy their livelihoods.  Lemhi tributaries don’t have a big enough flow to support spawning, which flood irrigation does not affect.

The goal has been to alter tributary water to a consistent flow state by diverting the streams into one, such as what Mr. Beyeler did on his land for fish habitat and spawning.  The BOR studied the Big Timber Creek 2006 to identify streamflow needs for steelhead, salmon, and bull trout, blaming irrigation “dewatering” for problems.  What is so crazy about this is that the Bull Trout is a predatory fish towards others, and have a recovery plan of their own, in which the Upper Snake area is included.  Spawning times are typically during July-August, well after the high spring runoff.  By combining tributary streams into a one flow stream, perhaps the plan is to reintroduce fish with this newly created fish habitat.  “Observations” of large bull trout in Big Timber Creek have been reported even though the life histories are unclear.  How scientific is that?

Idaho Statute 42-1501 also states that Idaho streams “be protected against loss of water supply to preserve the minimum stream flows required for the protection of fish and wildlife habitat”.  Does this mean water supply cannot be used for purposes other than for fish habitat protection?

In our form of government, a Republic, a court decision is not law.  Laws can only be created through the legislature.  There is no law for this IDWR proposal.  IDWR admitted, in committee, that they often use policies instead of rules or laws.  In response, Governor Little signed Executive Order 2020-02 which requires Idaho agencies to limit and consolidate “agency guidance”, including a statement indicating that it is not law.  IDWR created this proposal, presented it to those with water rights, ignored their objections, and have made a decision to move forward with it as if it were the law.

Idaho Administrative Rule 025-01 states “Applications to appropriate unappropriated water…will be evaluated using the criteria of Section 42-203A, Idaho Code, which requires an assessment to be made of the impact of the proposed use on water availability for existing water rights…and the effect of the proposed use on the local public interest”.  The impact of taking unappropriated high flow water will destroy ranchers in the Lemhi area.

It is clear that there is a nefarious agenda to use certain species of fish, their habitat or lack thereof, and interfere with water rights which are a real property to those Idahoans who hold those rights.  Millions of dollars, most of which are your tax dollars, are being spent to acquire land, change the landscape into something it isn’t, and create habitats that never existed.  If a Beaver understands that a spot in the water isn’t suitable for a dam, why do humans think they can do better?  To those who are involved, quit messing with Mother Nature, follow the law, and quit violating property rights.

Karen Schumacher is a regular contributor to Idahoans Against Agenda 21.
View all posts