Home»US»COP CHARGED WITH SECOND-DEGREE MURDER AFTER KILLING SOBBING, UNARMED MAN BEGGING FOR HIS LIFE
US

Over 1,000 people were killed by police in the U.S. last year. Regardless of whether or not someone can argue the potential justification in each case, that’s an insane number.

If the first three months of 2016 are any indication, this year will see more Americans dying at the hands of cops this year than last.

Welcome to America, where something as simple as bad judgment can get you murdered. 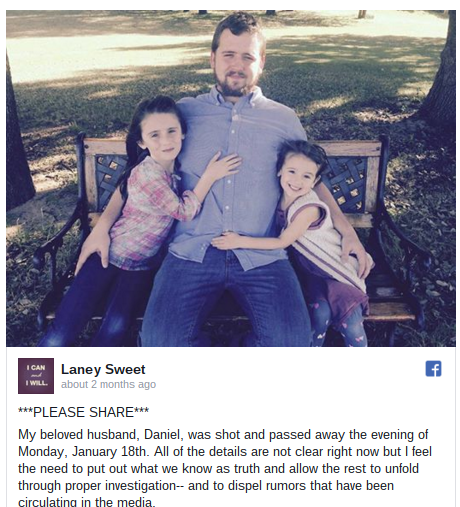 While more attention continues to be drawn to this horrifying police state of affairs, more officers are being forced to wear body cameras. With that, it’s becoming harder to “create” justification for deadly force when the evidence simply does not exist to support it.

Take the instance of Texas resident Daniel Shaver who died by cop unarmed and begging for his life.

Shaver, a 26-year-old married father of two, was at a hotel on a business trip for a pest control service. He was intoxicated and showing off his pellet guns to two other hotel guests. The clerk at the front desk called the cops after some other random guests complained that a man armed with a rifle was pointing a gun out the hotel window.

Police arrived on scene. Shaver’s widow, Laney, describes how her husband was murdered in her own words:

Daniel was traveling for work in Mesa, Arizona, an area he services 2-3 times a month for pest removal stores. He carries his work equipment: two pellet guns required by for job. Due to how expensive his company’s pellet guns are, he takes his hard case into his hotel room every night.

Daniel had befriended two individuals, a man and woman, who were staying at his hotel and invited them to have some drinks in his room. The woman saw Daniel’s case and questioned if it was a musical instrument. He told them that it was for his pellet guns he used for work. Then the man and Daniel took turns holding it and looking out of the scope near the window of his hotel room.

Unknowingly to my husband, two guests in the hot tub saw into Daniel’s 5th floor window and stated they saw men with a gun near the window of a 5th floor hotel room and notified front desk workers who called police.

The man in the room stepped out to call his wife momentarily. While he was gone, officers arrived and ordered Daniel and the woman out into the hallway onto their hands and knees. Through a mix of demands, Daniel cried out “Please don’t shoot me” as he tried to keep up with the changing demands the officers shouted at him while on the ground with his legs crossed behind him. His right arm made a motion near the side of his body, as if he lost balance, and officer Brailsford shot him with an AR-15 five times. Daniel has gunshot wounds ranging from his face down to his knee. Daniel was unarmed and fully compliant.

Daniel can be seen and heard on body cam

crying “Please don’t shoot.” It’s one of the last things he ever said, besides “yes sir” as he tried to do what police asked him to in order to not be killed over a misunderstanding.

He died instantly crawling toward police unarmed on a hotel hallway floor, begging for his life.

After reviewing officer Philip “Mitch” Brailsford’s body cam footage of the incident, the Maricopa County Attorney’s Office charged him with second-degree murder in the shooting death of Shaver. According to a report released by authorities, video, audio, and eyewitness accounts all basically back up the above version of events.

Brailsford has pled not guilty and claims he was in fear for his life, the same excuse we always hear in these situations. But why did they even attempt to force an obviously intoxicated man to crawl toward them like that if that were the case? Before they ascertained if he was even truly armed or not? Why wouldn’t they order him to freeze and force him to lay on the ground, arms out at his sides, while they secure him?

The officer claims that Shaver might have been making a move for his waistband (which would not have made any difference regardless, since no one sticks a rifle in their waistband and Shaver was not armed anyway which should have been apparent when police first ordered him down to his knees and then to lay face down on the floor), but how can a man even physically crawl without reaching his arm toward his waist at some point? Was he supposed to crabwalk toward the officers?

The man was sobbing and begging not to be shot the whole time, attempting to comply with officer demands.

Brailsford can argue it any way he wants, but video doesn’t lie. Obviously the authorities in Maricopa County who charged him with murder realize that.

We keep seeing stories like this in the news and we keep asking ourselves how things have gotten this far gone in America. If there is any silver lining to this horror at all, it is that as more and more officers are being forced to wear body cameras in the line of duty, so fewer and fewer will be able to get away with obviously unjustified use of lethal force.

Daniel’s widow set up a GoFundMe account here. The Justice for Daniel Facebook page can be found here.

Dominion Employee Caught on Video Downloading Data on USB, Plugging it Into a Laptop, Manipulating Data & then Palming the USB (Video)

Next Up on Gun Control Agenda: Ammunition Background Checks