Home»US»Council On Foreign Relations President: “USMCA Is NAFTA Plus TPP Plus A Few Tweaks”
US

President Trump is being lied to by his trusted advisors and he is clueless about their deceit.  Why is he clueless? Because he can’t possibly be supporting something that is so comprehensively bad for America and even antithetical to his wall.  Perhaps he so strongly wants to believe in the USMCA, that he’s been easier to be ‘covertly convinced’ about ‘the deal.’

Lest one good American with his ear can open his eyes before this arrives on his desk, it’s a real ‘done deal.’ It appears he is ready to sign it immediately, leaving with these advisors, his trust.  He will be screwed!  And America will be ‘transformed’ into a different world.

Believe it or not, I have actually had a couple of people tell me they think it’s possible that Trump does know the truth about the USMCA, which would make him also part of the problem.  Like most devout Trumpers, I choose to believe that that’s not possible.  I am all in for him, but this USMCA just doesn’t comport with his many, many incredible accomplishments and persona projecting American greatness.

Trump’s signing the USMCA will, in fact, be the biggest mistake of his presidency to date and unfortunately will probably become his enduring legacy.  He will be ‘The US President That Signed Off America’ to be run by the UN/globalist community steered most largely in America by the clandestine deep state managers at the Council on Foreign Relations in lockstep with their UN/globalist comrades.

Once he signs this monstrosity of deception with all its controlling tentacles that will render our government and our Constitution feckless, President Trump doesn’t get a do-over.  He was able to cancel TTP and TTIP because they were still looming bills in congress.

When he signs this as law, that’s it!  It has a six-year review written into it and an 18-year renewal statement.  Trying to get out of it will be like England’s’ BREXIT but tougher, because a lot more money will be easily spent to hold us down since we are the globalists’ biggest threat.

Short of a literal civil war or a long-standing BREXIT type ordeal we will be ‘cooked’ as a once breathing, sovereign, free nation.  Oh, we will probably still be allowed to keep our name for comfort’s sake, like the former nations now under the tenacity of the EU umbrella, but gone will be many of our freedoms we’ve enjoyed as Americans.  All of America will be forced into the Agenda 2030 UN program with its controlling ‘Sustainable Development’ 17 Goals.  See:  Welcome to Agenda 2030 in Coeur d’Alene, Idaho

One of many negative issues for the United States is cited by Christian Gomez in his article ‘What’s Really in the USMCA’ stating, “In the name of protecting fishes and other marine life, the United States would have to surrender its sovereignty over all of its waterways and miles of coastal oceans (including everything under, on, in, and above them) over to the jurisdiction of UN international law.”

What is particularly sickening about this horrendous climax about to befall America is that literally all the supporting conservative talking heads on TV & radio have bought into this because they believe in our great President and don’t fathom that his enthusiasm for it is the product of ingenious ‘stealth programming’ of him by others.  Virtually no one has done any vetting.  Worst of all, our apathetic citizenry is not present on most issues anymore and totally oblivious on this one since there have been no causations to notice for concern.

How many patriotic Americans are going to tolerate President Trump’s much vaunted USMCA once it begins being implemented by the powers of the UN globalist, once our patriots see what the USMCA really does.  It will:

This is all hard to believe isn’t it, since virtually all the talking heads in the media including all of them on Fox News choose to believe our wonderful President who is so busy and wants something so badly that is better than NAFTA, he is willing to follow the recommendations of his ‘trusted advisors’ who are to the one, all blatantly poker face lying to him.    See:  Why All ‘Free Trade Agreements’ Must Be Banned, They are Sovereignty Stealing, Deceitful Tools of Globalists: Some History & Facts

Since this is truly so hard to believe, then do something none of the media talking heads nor, unfortunately, none of the 348 House Democrats and Republicans who just voted ‘YEA’ for the USMCA obviously did not do:  Read the damn document!

We should be livid, because they generally like to say they voted for the ‘bait’ woven into the document for them to justify their votes, like they are pearl-like gifts for dairy farmers or other special interests.

This is a national crisis and quite literally nobody is aware of it.  We will morph into what will more than likely become the North American Union which will, in turn, become a segment of the UN-run, global government, ‘think New World Order.’  Again, should you have doubt, just read the document.

However, it runs for 1,809 pages — 1,572 pages for the treaty chapters, 214 pages for additional annexes, and 23 pages of side letters. Obviously, the mammoth size of the agreement should set off alarm bells that much more is involved than “free trade,” which should mean the absence of government intervention.

A much easier approach to learning all that’s in this scheme to ‘transform’ (sound familiar) America into a member state of a regional, UN-run government via this fine-tuned instrument of deception and guile, is to look at Christian Gomez’s spectacular expose’ of it in his article What’s Really in the USMCA? – A MUST READ!

Gomez’s genius approach to revealing the USMCA is to expose the UN’s controlling tentacles within the Trojan Horse agreement in his article and then allow you to go to his in-depth ‘USMCA Issues Index’ at the bottom of the article that features links to any of your concerns that take you directly to them in the actual agreement.  You will save a lot of time and be convinced quite quickly why this is all a ruse to take utter control of our freedoms and our government rendering The United States of America null & void.

“The pact is even worse than NAFTA regarding undermining American sovereignty and self-determination, in favor of North American integration extending beyond trade to include labor and environmental policies. It is, in fact, so bad that the globalists who had lambasted Trump for renegotiating NAFTA praised him afterward,” says Gomez.

“A side-by-side comparison of the USMCA and the TPP shows extensive overlap. Virtually all of the problems inherent in the TPP are likewise contained in the USMCA, such as the erosion of national sovereignty, submission to a new global governance authority, the unrestricted movement of foreign nationals, workers’ rights to collective bargaining, and regional measures to combat climate change.” – Quote from Christian Gomez in his New American Magazine special report ‘USMCA – A TPP Redux?’ 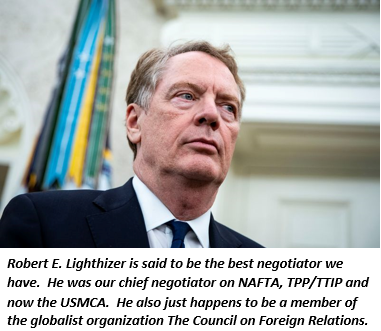 Guess who was the chief negotiator in both NAFTA and TPP?

Larry Kudlow, President Trump’s Chief Economic Advisor assures Trump that Lighthizer is the best negotiator we have and the USMCA is just what we need.

Council on Foreign Relations President Richard Haas said “The USMCA looks to be the trade pact formerly known as NAFTA plus 10-20%. Hope it becomes a precedent for TPP. I suggest the US-Pacific Trade Agreement (USPTA),” Haass said on Twitter, adding, “What matters is that the US joins it; doing so would bolster our strategic position visa-vis China and our economy.” The next day, Haass again took to Twitter, where he reiterated his renewed hope of the United States rejoining TPP. Haass tweeted: “USMCA is NAFTA plus TPP plus a few tweaks.”

The USMCA — the NAFTA replacement — represents the next globalist step toward the economic integration of the United States, Mexico, and Canada into an EU-style North American Union.

Oh, and they said NAFTA would boost our trade in large numbers and add at least 177,000 new jobs.  Yet, after having had a trade surplus for years, we immediately went to a $15.8 billion deficit the first year and it has increased every year since and we LOST at least 700,000 jobs stated Robert E. Lighthizer in his remarks on a NAFTA renegotiation, Aug. 16, 2018

Now VP Mike Pence’s office states, “The U.S. International Trade Commission says that within five years, the USMCA could add up to $235 billion in new economic growth and 589,000 jobs to the U.S. economy. 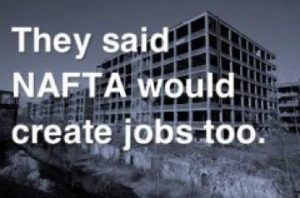 The late, Professor Robert A Pastor, one of the leading architects of the European Union wrote in Foreign Affairs, the journal of the Council on Foreign Relations: “NAFTA was merely the first draft of an economic constitution for North America.”

OUT OF NOWHERE, THE USMCA PUSH HAS STRANGE BEDFELLOW:  NANCY P

Making the strongest of statements on how bad this monstrosity must be,  the person that would do about anything to hurt Trump, Nancy Pelosi, all of a sudden is pushing for its passage, in fact, it’s reported that after having a lot of new Progressive stuff inserted into it at the last minute, she is even now trying to take credit for the bill and its passage.  That is all most true Constitutional conservatives should need to hear to ‘catch on.’

If this passes by the Senate and Trump eagerly signing it, there is NO second chance!  Trump was able to cancel the TPP/TTIP on the 3rd day of his Presidency because it was still just a bill in progress.  Once he signs this giant win for the globalists it would take Congress and Trump to repeal it.  Good luck with betting on Congress.  This could be tougher to accomplish than BREXIT in England, given the kind of money that would be available for our sorry LOBBYI$T loving legislators and see how frustratingly BREXIT has been going, going and going.  It’s possible that spirited American patriots may be more inclined toward civil war than putting up with absolute control by unelected, unaccountable, global elitists who know what’s best about everything for everybody in a Socialist world.

We have almost no time left to wake up Senators and especially President Trump.

I really want to believe in President Trump enough to think he would nuke this masterpiece of sovereignty destroying, evil deception as soon as he recognizes the truths about it.

If we could only find one person who has his ear to open his eyes.  In the meantime, all we can do is all we can do.  Please spread the word and make phone calls ASAP.

Mitch McConnell has said that he won’t bring this up till after impeachment trials in January.  But then, he could bring it up tomorrow.  I do not trust Mitch McConnell!

Call and log your opposition to this American sovereignty killing bill, the USMCA: