The entire narrative of CONvid-1984 is a sham. SARS-CoV2 has never been isolated and thus never been proven to exist. Yet, people without any symptoms of being sick at all are subjected to faulty PCR tests, some of which were requiring invasive and dangerous nasal swabs. While we have been documenting numerous people who have suffered adverse effects and even death following taking the experimental COVID shots, there have been countless people who have been injured due to the nasal tests, which are no longer authorized for CONvid testing.

The COVID Blog has the story.

The devolution of the polymerase chain reaction (PCR) “test” from 2020 to the end of 2021 is the functional equivalent of World Trade Center 7 with regard to the official 9/11 narrative.

The Centers for Disease Control (CDC) admitted in a July 21, 2021 bulletin that PCR cannot differentiate between influenza and so-called COVID-19. That same bulletin announced that the emergency use authorization for PCR COVID-19 testing would expire on December 31, 2021. In other words, those tens of millions of positive COVID-19 tests in 2020-21 were, for lack of better term, B.S. The foregoing facts are completely censored by mainstream media. Not one MSM outlet talked about the expired PCR EUA and the reasons why (except for phony “fact-checks“).

It reminds this blogger of a survey he administered in 2006. Arizona State University students were asked how many buildings went down in New York City on September 11. Seven in 10 respondents (70%) said only two buildings went down, not three. Thus a 47-story building (WTC 7) can be demolished in broad daylight in New York City, and, thanks to mainstream media propaganda and censorship, few people noticed.

There’s no definitive data as to how many Americans have foregone PCR testing completely, meaning never received one at all throughout the so-called pandemic. A November 2020 survey by medical instruments manufacturer Thermo Fisher found that 60% of Americans had never been tested for COVID-19 to that point. But the company discredited itself in that same study by declaring that PCR is the “gold standard” for COVID-19 testing. The survey also concluded that misinformation is the reason for testing hesitancy; and that “vaccines” are the only solution.

The CDC, in August 2021, started promoting at-home COVID-19 tests shortly after its PCR mea culpa. Two manufacturers, Siemens and SD Biosensor (with Roche as its distributor), received emergency use authorizations from the Food and Drug Administration (FDA) for their at-home COVID tests on December 29, 2021, just three days before the PCR EUA expired. A COVID-19 breathe test was also granted emergency use authorization last week.

The Biden Administration helped fund the EUAs with $70 million in funds from the Rapid Acceleration of Diagnostics’ (RADx) Independent Test Assessment Program. The keystone COVID caper took over right on queue. SD Biosensor was forced to recall a non-EUA at-home test in February once it was discovered in circulation by the FDA.

PCR and those experimental nasal swabs were a normal part of life for most Americans’ lives in 2020-21. Most of said people who cooperated with the invasive testing procedures are likely the same people who eagerly or otherwise lined up for the experimental mRNA and viral vector DNA injections. There’s no telling how many Americans have received at least one swab. But that’s all it takes to cause potential short and long-term damage.

Ms. Kaylin Young shared a graphic and very sad photo on Facebook on September 21, 2021. The Casselmann, Ontario woman showed her 5-year-old daughter bleeding out of her nose and eyes. The girl was subjected to a PCR swab simply to attend school. Ms. Young said the bleeding spanned 30 minutes, then stopped, then started back up again. 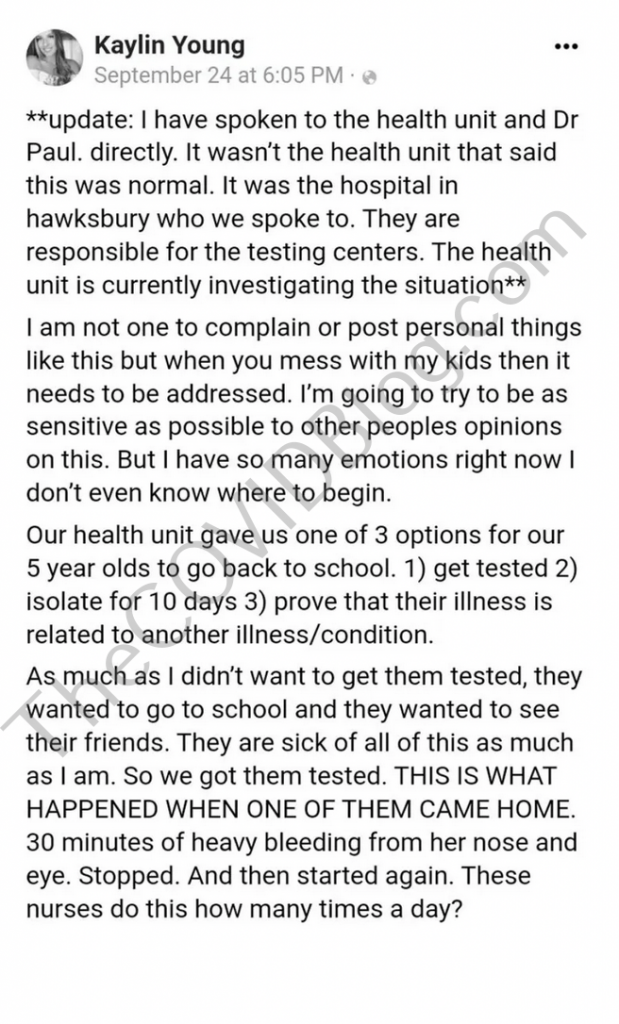 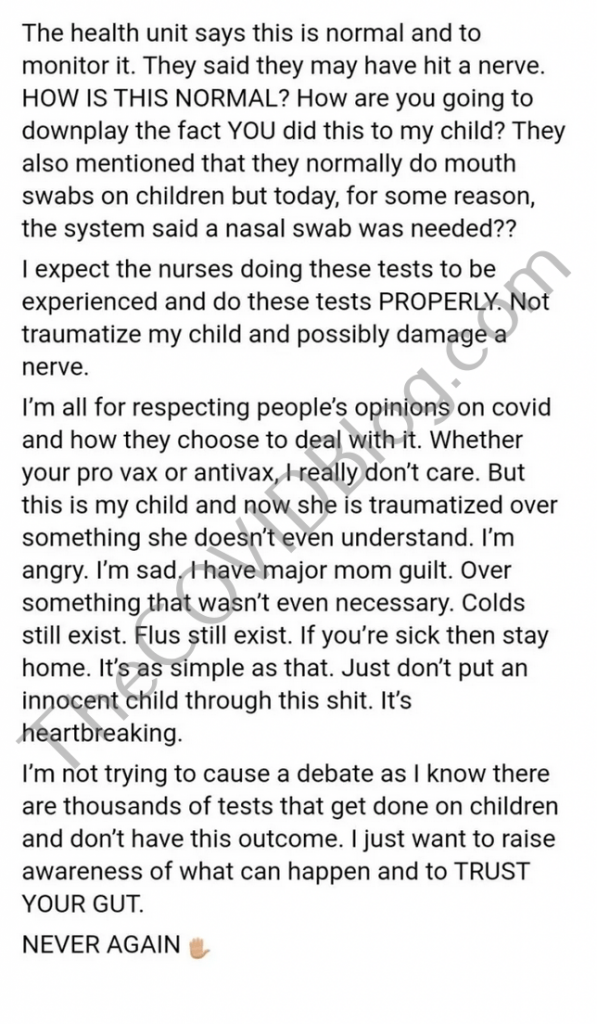 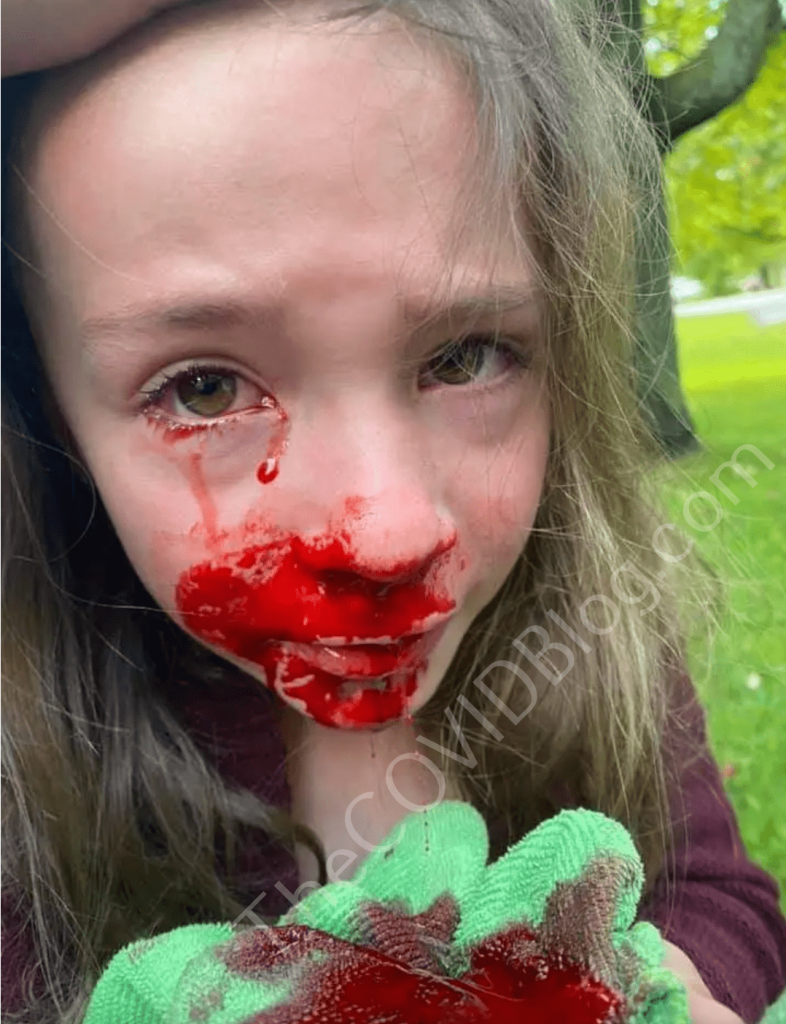 The backlash was so intense that Ms. Young removed the post shortly thereafter. The only good news is that the young girl, who looks to be a twin, is smiling and happy in recent Facebook posts.

Nose bleeds after the PCR swab are semi-normal based on anecdotal accounts on Twitter.

More than that in a bit.

Ms. Angel Eisenmann is a 40-year-old healthcare worker and mother of three. The Tulsa, Oklahoma resident first let the world know that something was wrong with her on November 17, 2020. Ms. Eisenmann, who was a hospice worker with the elderly, reported having seizures, Bell’s Palsy and small tremors. Doctors initially believed she had a stroke. 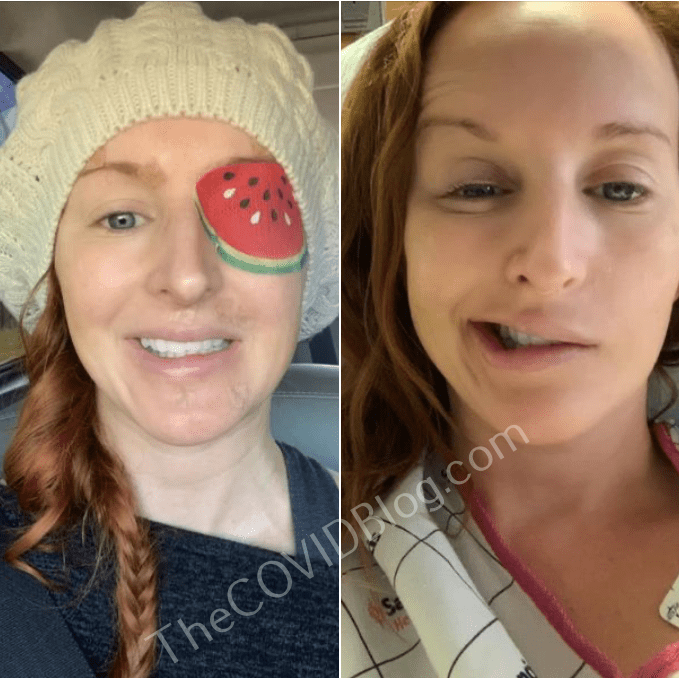 Ms. Eisenmann received the PCR swab for work that day. And ever since then, Ms. Eisenmann has suffered myriad health issues. A broken blood brain barrier as a result of the swab is perhaps the most serious that led to all the other problems. Ms. Eisenmann, who is non-vaccinated and refuses to receive the shots, posted about her ongoing struggles on April 13. 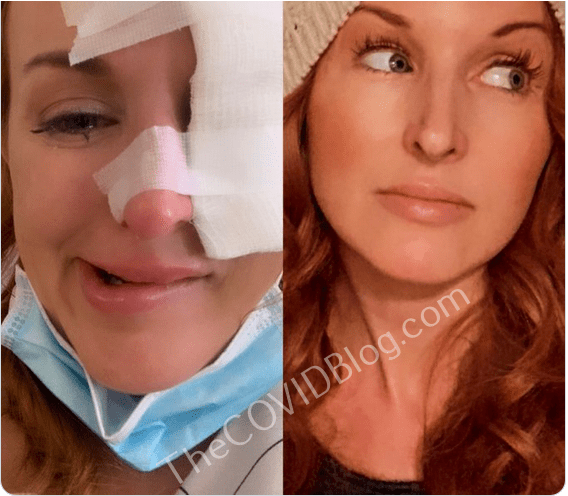 She’s been relentlessly attacked by blue-check Twitter doctors and trolls ever since the post was published. Ms. Eisenmann is now entangled in a legal battle with the first hospital that misdiagnosed her in the beginning. The second hospital found the compromised blood brain barrier.

The Multiple Sclerosis Trust in the U.K. suggests that a breakdown of the blood brain barrier (BBB) is the first stage of multiple sclerosis in most patients. BBB damage leads to autoimmune responses that results in nerve damage. The 2015 Handbook of Toxicology of Chemical Warfare Agents says the BBB “protect the brain from pathogens” and “presents a major obstacle for potential central nervous system preventative and therapeutic agents that target the CNS.”

A 2003 study published in the journal Restorative Neurology and Neuroscience found that patients with lab-induced BBB disruption had increased levels of a protein called S100β. Large amounts of said protein are associated with both BBB damage and brain damage.

Ms. Eisenmann called her experience “17 months of hell.” She told The COVID Blog™ that the second hospital discovered brain and CNS damage that the first hospital missed. The Oklahoma (first) hospital tried administering another PCR test months after the symptoms started. But Ms. Eisenmann had added two and two together and realized the swabs were the only culprit for her sudden health issues.

“[Doctors] sent in a psych team and deemed me crazy for refusing the test,” she said. Ms. Eisenmann now lives with her sister in Tennessee because she cannot live alone due to seizures and neuropathy. But the worst part for her is what this has done to her family.

“I cannot even mother anymore,” she told The COVID Blog™. Ms. Eisenmann sent us photos of her children out having Easter dinner. “[Facetime] is how I get to see them now,” she said.

Note that all of the so-called “fact-checkers,” including Pfizer-owned Reuters, concluded that the PCR swabs cannot reach the blood brain barrier. These organizations also said PCR was the gold standard for COVID testing. The truth is always the opposite of what these organizations say. Further, Twitter blue-check doctors are spreading propaganda, saying the BBB is bone. The BBB is a selectively permeable membrane, like those around cells. 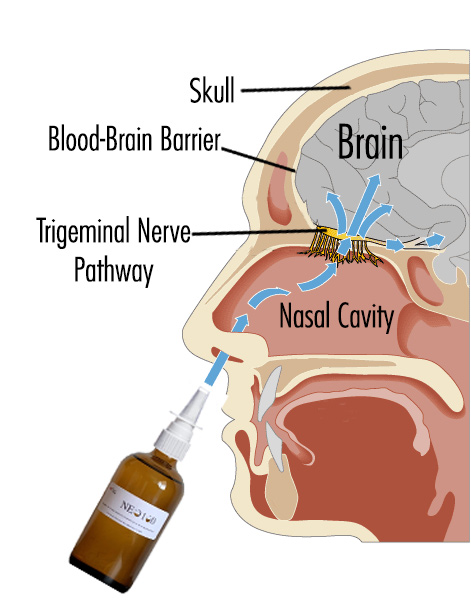 The COVID Blog also pointed out, “A 2021 case study published in the Cureus Journal of Medical Science described a 32-year-old man who got in a motorcycle accident. But before doctors would treat his injuries, they performed a PCR swab test. Doctors shoved the swab in so far that the “soft” part broke off in the man’s head. They had to perform a septoplasty (i.e. slice up the inside of his nose) to remove the broken-off piece of swab. Researchers essentially concluded that medical personnel incompetence was the cause. Read the full case study here.”

There was also a “2021 case study published in the European Journal of Neurology found that a 41-year-old woman developed meningitis (swelling of the brain and spinal cord membranes) after a PCR swab test. Researchers concluded that the meningitis was caused by a post-PCR cerebral spinal fluid leak after a “rupture between barriers from the nasal cavity and paranasal sinuses from the subarachnoid spaces.” Read the full study here.”

The entire lie that is COVID is both injuring people and killing them. Isn’t it time we just started saying “no” to government intervention in our health matters?

Food Production To Be Substantially Lower Than Anticipated In 2022