Home»US»Debt Disguised As Relief: Multi-Trillion Dollar Unconstitutional Stimulus Sells Out The People For 30 Pieces Of Silver
US

President Donald Trump stood before Congress and the people of the united States and declared, “We will never be a socialist country,” but less than two months later, the Congress, and no doubt President Trump, will hand off trillions of dollars that were printed out of thin air and attached on the backs of the people as debt to businesses, government employees, the people and a host of people who aren’t even citizens of any state in the US.  Of course, this proves that we’ve been a socialist country since the creation of the central bank known as the Federal Reserve.

Just so I can put you in remembrance.

So, as the Senate passes the unconstitutional stimulus of redistribution of wealth and criminally funding businesses on the backs of taxpayers in order to gain votes this November, what exactly is in it?

– $150 billion for state and local governments

Honestly, everyone in the US would have been better off to declare their families businesses and their children employees as businesses are the ones really taking it in.

Let’s not leave out the airlines.  In this package, Politico reports:

Airlines would receive $29 billion in grants, and $29 billion in loans and loan guarantees, as well as a reprieve from paying three of their major excise taxes on the price of a ticket, the fuel tax and a cargo tax. That funding comes with strings, though — no stock buybacks, and limits on executive compensation, to start. Half the funds would go toward “the continuation of payment of employee wages, salaries, and benefits” while the other half would go to loans and loan guarantees for passenger airlines, repair stations and ticket agents — subject to conditions.

And we have to continue to fund the war machine, right?

Yep, so the Pentagon gets another $1o.5 billion, including $1.5 billion for the National Guard to deploy up to 20,000 on-call soldiers to help state response teams fight the coronavirus over the next six months.

The bill would also spend $415 million on research and development work at the Pentagon, aimed at developing vaccines and antiviral medicine, which most of us question in the first place.

The Trump administration would get $200 million for boosting Skype-style health checkups by investing in services and devices that help health care providers connect remotely with patients.

Seriously, most of this stuff is purely unconstitutional and so is the socialism that backs it, but hey, don’t worry people, it’s only Monopoly money, you’ll never see those additional taxes coming to pay for it, right?  After all, they steal it from you in the withholding from your paycheck.

And let’s not forget internet and people who don’t have equipment and schooling.

The deal is likely to omit funding that both lawmakers and the Trump administration sought to close the “homework gap,” the term used for the difference between families with internet connections and equipment and those without. Democrats had wanted at least $2 billion to go directly to an FCC subsidy program that helps schools and libraries connect to the internet, while FCC Chairman Ajit Pai requested $50 million for a pilot program geared specifically toward helping schools.

The US Postal Service also got bailed out too.  They were granted a $10 billion Treasury loan to stave off total insolvency.

Farmers and ranchers got a bailout too:  Nearly $24 billion, including $14 billion for an obscure Depression-era financial institution that USDA has wide discretion to use to stabilize the farm economy. Another $9.5 billion would be set aside for emergency aid for the agriculture sector, including cattle ranchers and fresh fruit and vegetable growers.

The public indoctrination centers we call public schools, that President Trump declared were “failing” in his STOU address got $30 billion in “emergency education funding,” whatever that is.

There were people that received exemptions from certain taxes, such as distilleries, retailers, restaurateurs and hotels.

Of course, then there were the hoorahs but Senate majority leader, turtle man Mitch McConnell.

“A fight has arrived at our shores. We did not seek it, we did not want it. But now we’re going to win it,” McConnell said after the Senate passed the package 96 to 0.  “Our nation needed us to go big and go fast, and (we) did.”

Yes, you broke the law, the Constitution really big this time in multiple ways and not just with this socialist bill.

Eric Levitz at the Intelligencer writes about the ugly part in this stimulus.

The bill (arguably) approves $4.54 trillion for a plutocracy-stabilization fund.

The legislation doubtlessly features a wide array of unseemly provisions. Given the dire necessity of getting immediate aid to individuals and small businesses, however, one might forgive a bit of small-bore tribute to the gods of K Street.

No, the legislation does not directly award large corporations (and their well-heeled shareholders) exponentially more aid than it affords ordinary workers or small businesses. But in practice, there’s reason to think that it will.

Officially, the bill devotes $500 billion to shoring up the corporate sector, with a fraction of those funds earmarked for airlines and firms critical to national defense (and/or the military-industrial complex) like Boeing and General Electric. But $454 billion of that total will go toward backstopping new Federal Reserve lending programs that principally benefit big business. To elucidate this point in plain English: It is normal for private banks to maintain a 10-to-1 ratio between the amount of money they’ve loaned out and the amount of capital they actually have on hand. The Fed has not yet specified the exact leverage ratio that it will apply to that $454 billion Congress appropriated, but some officials have indicated that 10-to-1 is about right. Which means that Congress’s appropriation is (potentially) sufficient to supply corporate America with more than $4 trillion in subsidized financing.

There remains ambiguity about exactly how this giant pot of money will be distributed. Officially, that $454 billion won’t support loans exclusively to large corporations but also to select, creditworthy small businesses, along with state and local governments. That said, the common understanding among legislators and reporters is that the bulk of this money will go toward supplying credit to big firms (which is why there are separate sections of the legislation devoted to supplying loans to municipalities and mom-and-pops).

Some may find the disparity between the scale of financing the bill provides to big business — and that of the relief it directs to everyone else — objectionable, in and of itself. But the most offensive aspect of the corporate-aid package is its dearth of conditions. Progressive Democrats had proposed requiring corporations that accept public financing to forswear layoffs for the duration of the crisis, adopt a $15 minimum wage for their employees, give workers representation on their boards, swear off stock buybacks, and give the public an equity stake in exchange for assuming the risk of investing in their enterprises.

None of these conditions seem to have made the final bill. According to leaked drafts of the legislation, bailed-out companies will be barred from laying off more than 10 percent of their workers for the next six months (better than nothing but not great). And entities personally owned by the Trump family will not be eligible for the Fed’s loans (though they will be eligible for other forms of corporate welfare). Meanwhile, Treasury Secretary Steve Mnuchin will have the power to forfeit any gains the public might earn on its investments and to give subsidized firms the freedom to transfer the public’s funds to their (overwhelmingly wealthy) shareholders in the form of dividends.

Some may question the government’s entitlement to dictate terms to companies that accept its relief. After all, this crisis is not analogous to 2008. Unlike the Wall Street banks that reaped bailouts 12 years ago, the firms seeking aid today bear no direct responsibility for the catastrophe that threatens their survival. The state itself is arguably more culpable. After all, it was the federal government’s belated response to the burgeoning pandemic that forced state governments to effectively outlaw most forms of economic activity. So why shouldn’t Uncle Sam compensate the enterprises his own negligence has imperiled, at least in the form of no-strings-attached financial support?

Some progressives have tried to answer this objection by suggesting that large corporations wouldn’t need any bailout if they hadn’t squandered their record-high profits on payouts to CEOs and shareholders. As the American Prospect’s David Dayen writes:

It’s not a bailout for the coronavirus. It’s a bailout for twelve years of corporate irresponsibility that made these companies so fragile that a few weeks of disruption would destroy them. The short-termism and lack of capital reserves funneled record profits into a bathtub of cash for investors. That’s who’s being made whole, financiers and the small slice of the public that owns more than a trivial amount of stocks.

But this seems misguided in two respects. First, it does not seem realistic to expect corporations to maintain capital reserves large enough to survive an economic shock as vast and unprecedented as that which the coronavirus has unleashed. And second, it would be undesirable for corporations to hoard cash at that scale, anyway. The problem isn’t that corporations haven’t been sitting on enough money to survive a pandemic but that they’ve been spending their savings on executive compensation and dividends instead of on wages and productive investment.

As I pointed out the other day, here are a few breakdowns and notice the specifics of what is getting funded.  These were provied to me by my co-host on Sons of Liberty radio’s Rotten to the Core Wednesday, Lynne Taylor. 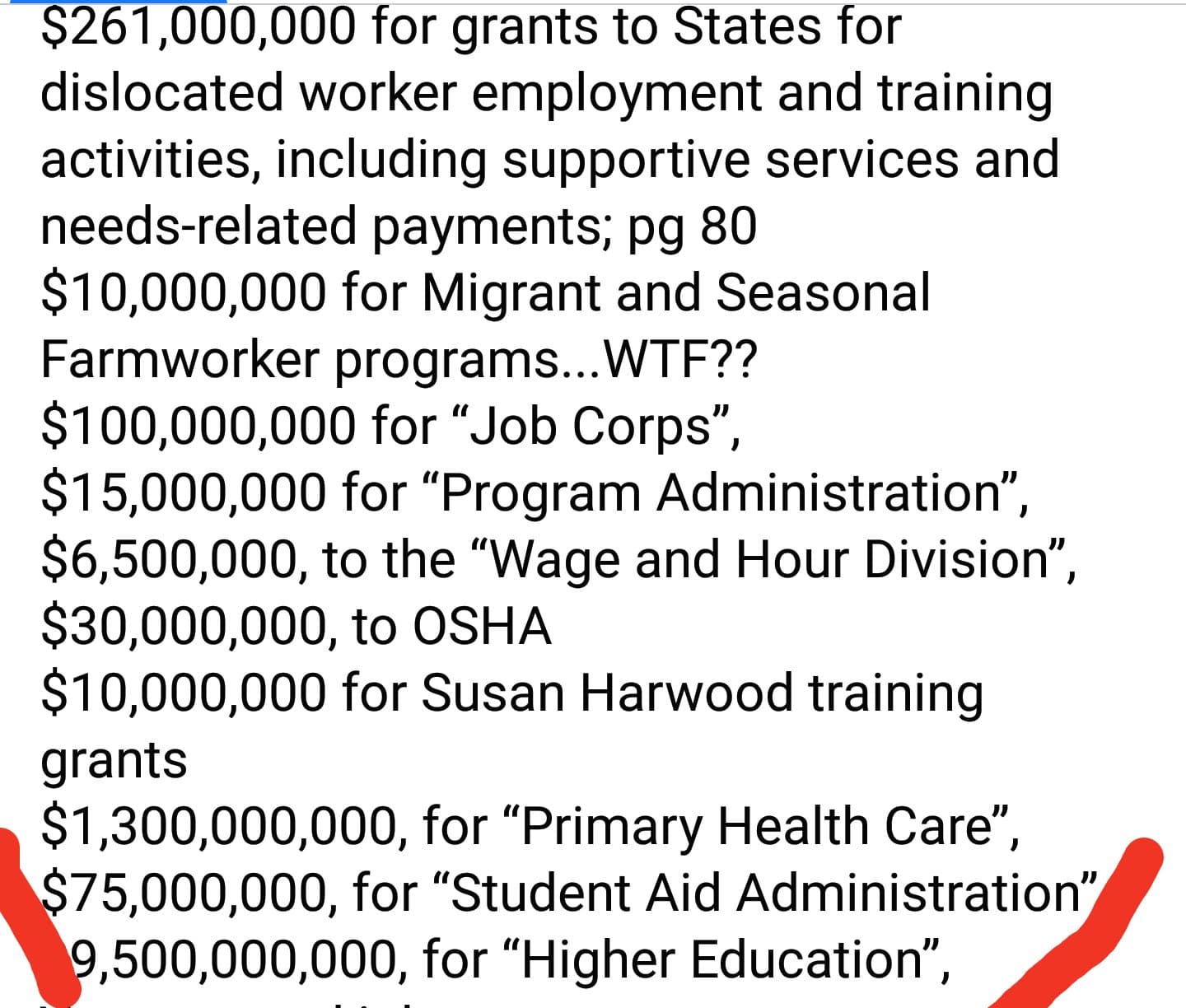 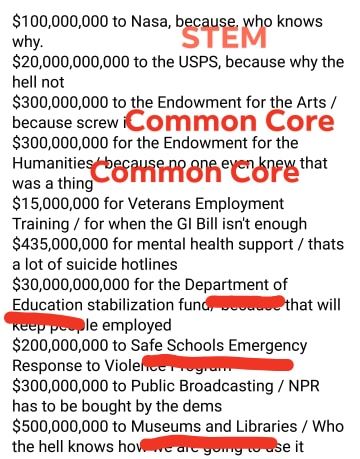 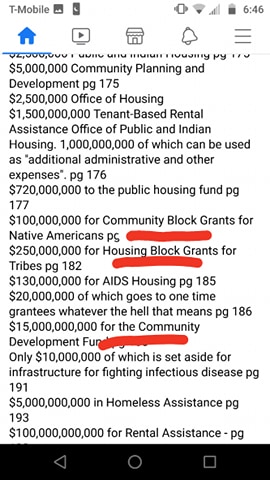 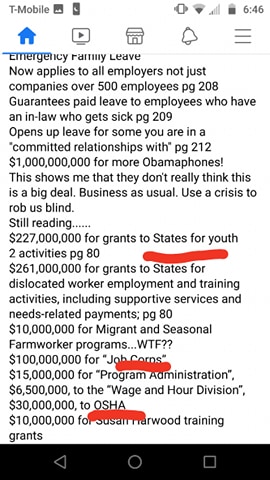 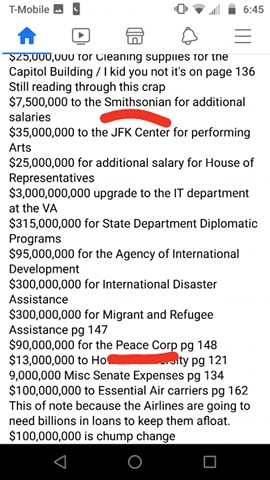 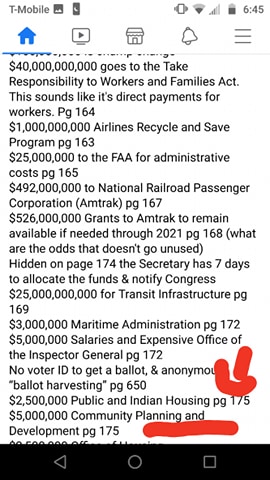 And you don’t think you live under a similar form of socialism as Venezuela?  Come on!

Just take a look at the national debt as of right now.

In November, we reported the national debt was up $16 percent under Trump and surpassed $23 trillion.

What do you think the $1.5 trillion he had the Federal Reserve dump into Wall Street and then the rest of this money is going to do to the debt?  It will double the debt he has incurred over the past three and a half years that you will pay for people.

Who Cares About The National Debt? It’s Only Destroying Us From Within

I know, Congress put this all together, but he still has the power of the veto under the Constitution, but he’s not going to use that.  He will sign it and declare a great victory.

We are getting it coming and going and sadly, the people of the united States are all to happy to be bought off with a meager $1,200 check.

Our forefathers would have been dumping more than tea in the harbor at this point!

New York Imam Finds the Key to Coronavirus: It Comes From Women Showing Too Much Ankle - No Really!