Nine months ago, Facebook and Twitter — without warning or justification — deleted the pages of Free Thought Project and Police the Police which had over 5 million followers. During this purge, they also removed hundreds of other pages including massive police accountability groups like Cop Block, Filming Cops, and stifled the reach of Photography is Not a Crime. We reacted to the purge by starting new pages with the 2.0 appendix at the end of them. On Friday, nine months after they wiped these pages from the internet, Facebook struck again, and again, no reason was given. 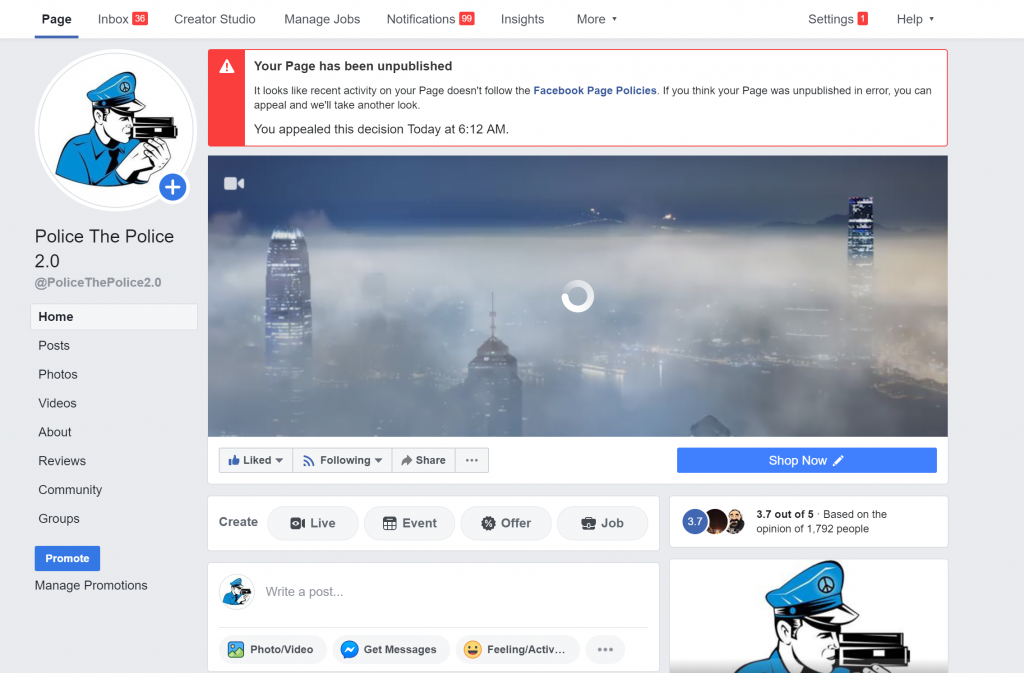 The only statement given for the latest purge was the following: “It looks like recent activity on your Page doesn’t follow the Facebook Page Policies. If you think your Page was unpublished in error, you can appeal and we’ll take another look.”

The implications of such a move to censor those who expose the police state are horrifying. Before it was deleted last year, Police the Police was the largest police accountability group on the internet and now, despite making back a lot of that ground, it is no longer.

For years, we have exposed criminal cops and shined light into the darkness where other media outlets were scared to go. Police the Police and these other pages taught people how to flex their rights, film the police, and to not be afraid to stand up to the police state.

Never once did any of these pages encourage violence, seek to stoke divide, or perpetuate any hatred toward police. We simply called out the problems with many of the tactics used by police and proposed solutions to them. Now, with the click of a mouse, this wealth of content and information is gone once again as Facebook appears to be going after anyone else who questions the police state, including Police the Police 2.0.

Why would they do this?

In 2015, states across the country began passing what are known as “Blue Lives Matter Laws” which added the job of police officer to a protected class of citizen.

Per the ridiculously unnecessary legislation, the voluntary choice of becoming a police officer, emergency responder, and firefighter are protected against hate crimes the way historically persecuted categories like race, gender, creed, religion, and sexual orientation have been — making crimes specifically targeting cops hate crimes with enhanced penalties in the eyes of the law.

Although we have never encouraged violence, always promoted peace, and never stoked hatred, simply reporting on police crimes has apparently become a violation in the eyes of Facebook.

What’s more, armies of police state worshiping Facebook users repeatedly report our content, despite it not being in violation, just because it offends them.

Unless we fight back in the form of sharing information deemed “wrong think” by the censors, this problem will only continue to get worse. We must continue to alert our fellow humans to this censorship before it becomes the norm. We must use this recent purge as our Streisand moment and turn this massive and blatant act of censorship around as a tool to expose the tyrants behind it.

Make no mistake, October 11, 2018 marked the day the battle over information became a war and the deletion on Friday shows how far we have to go.

If you’d like to subscribe to our site to aid in the battle against the censors and receive special perks along the way, you can do so at this link.

We are also working with the folks from minds.com and have created a platform on their uncensored network as well. You can follow us at this link.

We have been on MeWe as well.

We will continue to fight no matter how much they tighten their grip. There is no other option.

US Women Having Fewer Babies Than Ever In Our History