Anti Fed Ed Warriors, regardless of COVID-19 or not, the federal government has long been overreaching into your family and mine. Somehow, through their corruption, the members of Congress, federal agencies connected to education have decided they can run families across America much better than We the People can. Somehow, via the addictive federal funds thrown to the States, the leaders in our State capitals have become convinced they are the minions to carry the micromanaging programs out.

Somehow, through all the hype, propaganda, and, out and out deception, many taxpayers and parents have stepped right in line with all the hook/line/sinker plans the federal government has.

So, what’s my point? Due to COVID-19 and what the government predicts will be subsequent maladies, the school choice Trojan horse has been trotted out yet again. Add to this it’s an election year, the ‘stuck on stupid’ badge can be worn by several in D.C.

That’s right, start at the top and follow the agenda down to your home. If you are sure how school choice is a Trojan horse, here’s the link to EVERYTHING I have researched and published on the topic. If you think money from the federal or State governments is NOT against the law, look at the 20 US Code 1232a. “Any” covers funding, too! While the code stresses federal, don’t forget, the money/funding is still federal control once it hits the States’ treasury.

While I’m not a fan of Nietzsche, this one quote is absolutely spot on for ‘school choice fallacies and truths’ for Americans. The added emphasis is mine.

Warriors, as we know, both these ‘gentlemen’ have done much to undermine American sovereignty, when it comes to education. Alexander is one of the worst education criminals running free. Sen. Scott is so devoted in the CCSS Machine’s cradle to grave workforce alignment, it’s also criminal.

Why am I being THIS strong? Because both of these men are being 100% unconstitutional in their past education misdeeds, but also in their NEW joint effort for the School Choice NOW bill!

TRENDING:  Amazing Things Are Happening For This Idaho Candidate's Campaign For Congress!

The Bill doesn’t even have a number yet, but has been trotted out in a press release on Sen. Scott’s website! 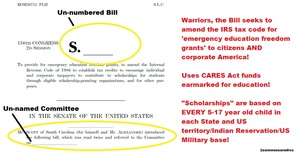 Of course, Pres. Trump and Sec. DeVos have been pushing education freedom scholarships ($5 billion to start) for a while now. Check out DeVos’s tweet the day the announcement from Sens. Scott/Alexander came out. 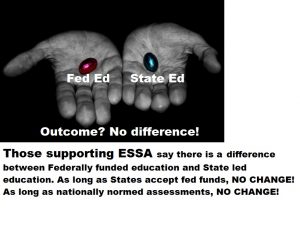 Warriors, this is somewhat of a surprise that one of the few in Congress claiming to hold everything to the Constitution would be on the school choice fallacy bandwagon, but Sen. Dr. Paul is. His press release states that his Bill will take federal funds to States and distribute them to parents. But his language is that parents can use their own tax dollars. No, once you submit taxes to the federal government, the strings to any money returned or given to you are already strangling your freedoms!

Below, I’ve given you a previously posted image of mine from the U.S. House. Notice the emphasis I added, which is based on facts/research. Rep. Biggs’ information is based on the CCSS Machine.

Paul’s S 4432, SCHOOL Act Bill is so new, while it has a number on Congress’s website, the text of the Bill (without a number) can be found on Paul’s Senatorial website. (*Note: you can always sign up for Bill updates on any Congressional Bill. Go to www.congress.gov, select your Bill of interest and click on the ‘get alerts’ tab.)

Warriors, Sen. Dr. Paul’s Bill spells out the agenda the CCSS Machine has been aiming for all along. Money to follow the child, regardless of location! What does this mean? The data collection that comes with money following your child turns them into cyber human bitcoins and blockchain data!

Back in 2019, my “HC Police” article detailed how the money/child/data chain was actually tied to the OECD’s (Organization for Economic Cooperation and Development) ‘human capital’ definition (see below).

Warriors, make no mistake, the 116th Congress is NOT the first group to try to snow We the People on ‘school choice’. However, since Sen. Lamar Alexander will not be running for a term beyond 2020, he’d love to see money attached to families. Remember, my friends, he’s been seeking this very thing since the 1980s.

Also, my recent series on HR 2 (Moving Forward Act) ties into the quest for total government control, not only in education, but our entire nation. (*Note: while I’ve linked you to Part Four, above; Parts 1, 2, and, 3 are also embedded for you.)

A Clearer Breakdown of What This Infrastructure Bill Is Really Funding

Coronavirus is the New ‘Terrorism’