Be imitators of me, as I am of Christ. Now I commend you because you remember me in everything and maintain the traditions even as I delivered them to you. But I want you to understand that the head of every man is Christ, the head of a wifeis her husband, and the head of Christ is God…. For man was not made from woman, but woman from man. Neither was man created for woman, but woman for man. -1 Corinthians 11:1-3, 8-9

39. Dominate the psychiatric profession and use mental health laws as a means of gaining coercive control over those who oppose Communist goals.

40. Discredit the family as an institution. Encourage promiscuity and easy divorce.

A Gillette commercial has been in the news for the past week or so causing an outrage among real men as it seeks to vilify manhood as something evil, something to be abhorred and even something that might need institutionalized and medicated.  However, that is the furthest things from what our Creator, you know the one our founder appealed to in the Declaration of Independence for where our rights come from?

God gave dominion of the earth to man in the beginning and provided him a helpmate, woman, to fulfill that command.  Man was not to lord his authority over woman, but to love her as she submitted to his leadership in taking dominion over the earth (Eph. 5:28).

However, when the Fall came and Eve first sinned against God pulling her husband into it and dragging the whole human race into sin and death, God pronounced the curse of sin and its effects.

“Your desire shall be contrary to your husband, but he shall rule over you.”

God is not speaking of sexual desire here.  Eve already had that as a part of her makeup.  He’s speaking of her desire to usurp the authority of her husband.  And when it speaks of Adam ruling over her, it suggests the true battle of the sexes rather than a harmony of love and working together to accomplish the same goal for the glory of God.

As you will note from the beginning quotes, Communism’s goals seek to undermine the family.  Karl Marx listed ten planks in his Communist Manifesto, and virtually all of them attack the family in some way.

TRENDING:  No Other Country is Capable as are the Soviets of Manipulating Public Opinion in the West

If you support any of these things, you are partially a Marxist, and not only have an anti-American mindset, but also an unbiblical mindset.

Enter Gillette to put their two cents in to attack the head of the family and seek to pummel him under their feet and emasculate the men of our country.  They are in for a rude awakening.  Just watch their stocks start to plummet.

And Gillette isn’t just attacking men, they are openly promoting the murder of your offspring. 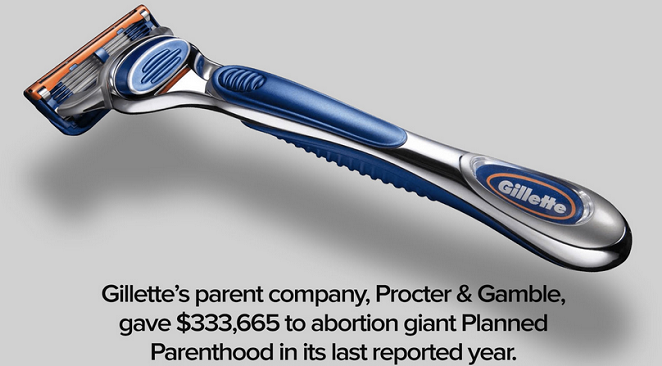 With all of this said, Paul Joseph Watson has put together another great video demonstrating why this type of attack on men by a razor company is utterly detestable and backwards.  While I don’t approve of some of the language, the point is clear:

The Capital Riots & The FBI Infiltration Of Patriot Groups

BIG SOLUTION: Well-Established Patriot Shop with Over 450 USA-Made Products with no Poisonous Chemicals, No Debt, and No Buyout – Ditch Big Box Stores Now!

11 Cities Move to Pay Money to Black People as “Reparations”