With governors and the federal government acting outside of their jurisdiction in shutting down the economy, businesses and trying to control people, eventually, the results of their lawlessness will be worse than whatever they projected upon the people in this coronavirus hoax that has been played out on the world.  And get ready, because already, beef prices are beginning to soar, and if they are, you know everything else is about to follow.

Wholesale American beef prices jumped 6% to a record high of $330.82 per 100 pounds, a 62% increase from the lows in February, according to Bloomberg, citing new USDA data.

The surge in beef prices comes at a time when the nation’s food supply chain network has been severely damaged by meatpacking plants going offline due to virus-related shutdowns and worker shortage. Bloomberg highlights the latest plant closures in the map below: 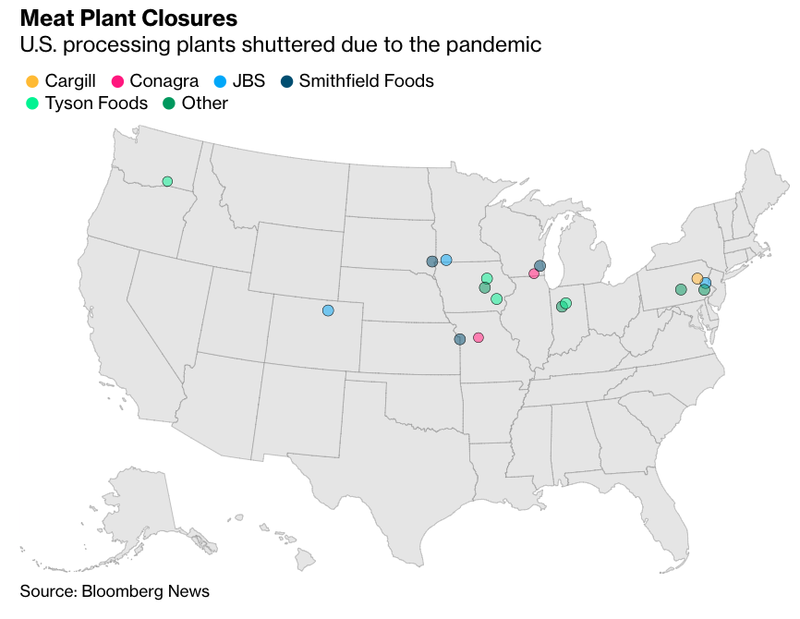 Soaring food inflation came one day after President Trump said he would be issuing an executive order to address meat shortages.

“Because of the virus, meat slaughtering is 40% below where it needs to be to handle all of the animals coming to market, said Arlan Suderman,” chief commodities economist at INTL FCStone.

“Processing plants were generally in favor of the executive order that would give them liability cover when reopening,” Suderman said. “Yet, the order still does not solve the problem of employee absenteeism.” At least 20 workers in meat and food processing have died and 5,000 have tested positive or forced to self-quarantine due to coronavirus, according to the United Food and Commercial Workers International union.

Just days ago, Tyson Foods warned in a full-page ad in the New York Times on Sunday that the “food supply chain is breaking.”

And with tens of millions of Americans out of work, a crashed economy that is plunging into depression, and rapid food inflation — this could all suggest that the evolution of the virus crisis is not just an economic crisis but also social instabilities are ahead.

Greg Mannarino: The Fed Is “Trying To Kill What’s Left Of The Middle Class… This Is All By Design”

Government Warning: “One Way Or Another, The Economy Is Going To Lockdown Again”