Editor’s Note:  Both Lynne and Clarence Henderson were on the Sons of Liberty radio show on Wednesday.  Lynne appears in hour one and Clarence in hour two.  Click below to see the interview.

US Perestroika: The New Indoctrination Into Socialism & Social Justice

Author’s Note:  I agree with what Mr. Henderson and his fellow protesting associates did: stand for not just one type of person, but ALL people. These young men didn’t stop to step on others to draw attention to the injustices of their day. We should be taking lessons from any of these gentlemen still among us!

The historic figure I’m referring to is none other than Mr. Clarence Henderson. In 2019, I mentioned him as part of a point about proper and true civil disobedience in the article “Lustrous Meddling”. If you’re not familiar with Mr. Henderson, he was one of the Greensboro Sit-In members in 1960. In this video from the Winston-Salem Journal, you can hear him tell WHY he participated. It was freedom for ALL people, not one skin color or one set of beliefs. It wasn’t about stepping on one person to lift up another.

Mr. Henderson and I have talked recently about the BLM (Black Lives Matter) curriculum in schools and communities. I’ll be sharing his words and reactions in this article. I’ll also be sharing some research and resources for you.

Warriors, as you know, the UN’s ‘bastardization’ of Christianity is part of why we’re seeing the nation being ripped apart. Because education’s deemed a UN defined ‘human right’, we also know that the SDGs (Sustainable Development Goals) include SJ, ad nauseam.

While many others have been showing and sharing resources on BLM, it was actually a teacher’s planner for the academic year 2020-21 which caught my attention via advertisements.
It wasn’t that I saw BLM in the ad, it was that the planner was titled for teachers to take SJ into all classrooms from PreK to adult and in all types of education.
If you look at the sample pages below, you’ll see lots about many kinds of SJ. It’s the special unit for teachers on BLM, that Education for Liberation Network shows alliance.

The Teacher’s Planner For Social Justice:

Warriors, in the link above, you’ll see sample pages. Notice right off that the tone of the Toni Morrison quote is very anti-white. She goes so far to see that all whites have a serious problem. Contrast her militant attitude with the words of Mr. Clarence Henderson’s: “Compare today’s activities to what I did with a peaceful sit-in. We were able to express our grief in a visual and respectful manner. The tearing down of our nation’s laws based on God’s laws are ones to be ruled not by man, but by principles.”

I should point out that Ms. Morrison also wrote The Bluest Eye which has been misused in education to promote CSE (Comprehensive Sexuality Education)passed off as ‘English language arts learning’. As we know CSE is part of the CCSS Machine’s indoctrination. 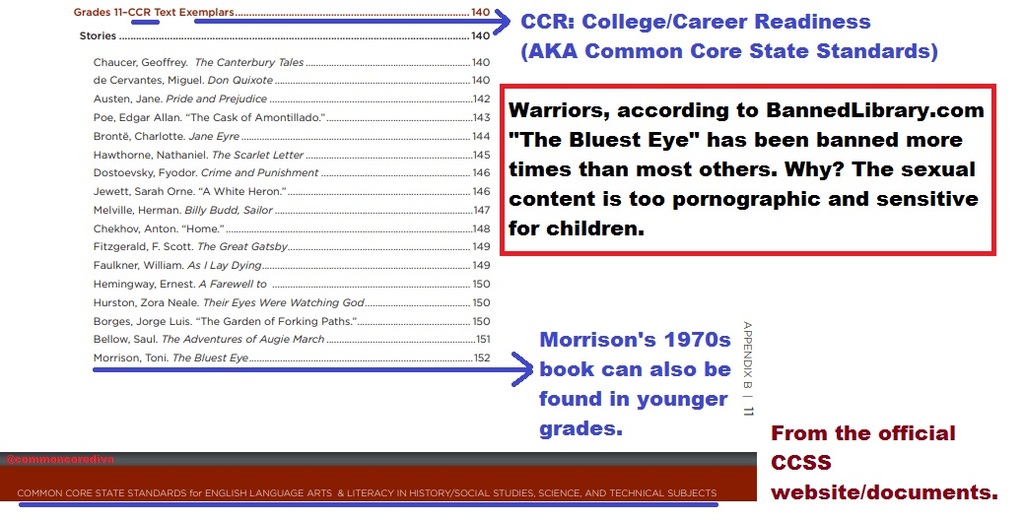 When asked directly about BLM, Mr. Henderson had these words, “BLM curriculum is indoctrination, not education. Our schools teach ‘what to think, not how to think’. BLM doesn’t show the true progress of America. The classical framework of the good, bad, and, ugly in American history is gone. It teaches the opposite of ‘we are a nation’ to that of individuals.” Mr. Henderson went on to state that he’s very aware of the Marxist detriment to NC (and the nation) that is happening in education.

TRENDING:  To France from a Post-9/11 America: Lessons We Learned Too Late

Warriors, on Page 12 of the Education for Liberation Network‘s sampler, you can find the UN (United Nations) cited. Below is a page from the BLM special unit where you can tie the UN’s SDGs (Sustainable Development Goals)  to BLM (Black Lives Matter): 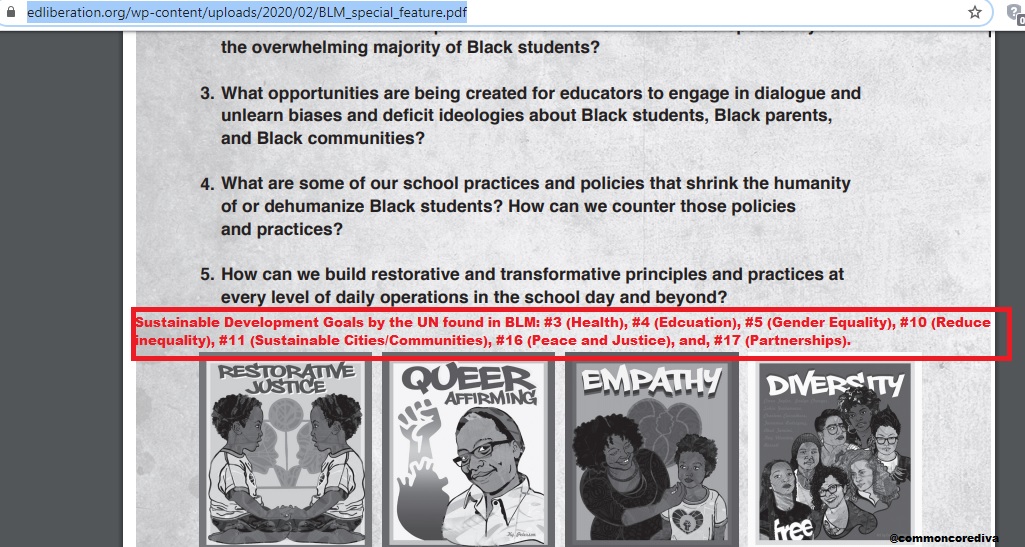 I also found in researching a bit more about the UN’s SDGs that kindness is used as a tool to implement the globalization of our society. If you look at the images on the Education for Liberation Network’s website, you’ll see books with titles affirming this.

Mr. Henderson’s words about the underlying agenda and ‘principles’ I shared with him during our conversation?
“It’s unfortunate. We’re committing tyranny against our youth. We should see ‘good in/good out’ not ‘indoctrination in, indoctrination out’.”

For the past few years the Education for Liberation Network has hosted annual conferences called “Free Minds, Free People”. You can read the platform to see how all this is intersecting. If you look at last year’s list of conference workshops, you’ll also find that the education aspect is filled with all kinds of civil unrest. So wait, if that’s true, how is the unrest worse now than when the Greensboro Sit-in took place? Warriors, as was stated earlier, the unrest was there and is present now. The actions to address these issues, however, is what has changed. Peaceful protests have become anger filled free-for-all events. The stirring of the pots (aka: prompting the students to think in ways to force the agenda) has helped this anger become physical. So physical that little positive results can actually occur. In short, Warriors, the very things needing to be addressed are buried under mountains of combativeness.

Let’s not forget, Social Justice is not exclusive to public schools! Especially knowing the UN’s in the middle of it!!

Have you seen the BLM coloring books for PreK to elementary grades (available for free to anyone)?
What about the BLM prompts for middle schoolers? Do you know the high schools use lunchtime as a focal point for BLM power? (Again, these resources are out there and free to anyone who is in education at any level.)

Warriors, I found this 1990s video in the suggested resources for high school students. It’s called “All God’s Children”. The video is about 26 minutes long and focuses on the need for acceptance (across the nation) for gays and lesbians in the Black community. It’s being inserted in the BLM related tools. This video was originally for adults and is now used for children.

Warriors, the Education for Liberation Network is tied to Rethinking Schools. Rethinking is an organization which has become ‘the preeminent publisher of social justice education materials’ in the world. Rethinking is also tied to Greenpeace, Scholastic Publishing (a well known CCSS Machine member), and, other globalism entities. Rethinking is also the one group instrumental in launching BLM in WA (State).

The Free Minds, Free People Conference (Education for Liberation’s annual event) is supported by the Bush Foundation (in MN, not the former President’s). This Foundation is in full support of BLM.
The Bush Foundation is part of a MN specific SJ collective of corporations. The Joint Statement call for not only BLM style SJ, but climate change, as well.

Thinking that Bush Foundation was in support, I wanted to know if the George W. Bush Presidential Center also is in support of  SJ. Warriors, it is! Not only SJ but education reform, too.

From CA, this eye opening report on the funds from BLM going to pave the way for whites in politics is very interesting.

From the Human Rights Watch, this image below (accents are mine):

Warriors, is SJ written in the pages of ESSA? In that exact phrase, no, social justice isn’t there. However, SJ IS present in every bit of the ‘law’! How? Social and Emotional Learning (SEL) is one of the most major areas, but it’s also woven into EVERY social and cultural supportive program and/or funding connected TO education at schools AND in the communities. Remember, much of the ESSA also has the UN’s SDGs embedded, so the social justice is an automatic ‘given’.

SJ is also lurking in every public location. Just go to your local library or museum. Visit a county office, or simply drive down the road. SJ billboards are popping up everywhere. (*Note: I did a general internet search and found over 11 million results of SJ billboard projects all over the nation.)

Congress has over 2,000 documents (resolutions, proposed bills, etc.) on SJ. What about the State level legislation or activities? Below is an example from where I live:

There are 2 NC Senate Racial Justice Bills (S 775 and S 803*) at the moment. Both Chambers (House/Senate) have several ‘justice’ bills. (*Note: S 803’s ‘racial justice’ is hidden in the Amendment attached to the Bill.)
Education is attached to several of them, but the ‘justice’ is in these areas: economic, environmental, and, electoral.
I found a summary of these on the NC Together Forward page of the NC’s Unitarian Universalist Church (The entire denomination is tied to the United Nations for global peace and justice).

Warriors, Mr. Henderson graciously sent me a written statement he wished for you to see. It was an honor to speak with him and I pray his type of protest and standing for truth continues on.

Have You Ever Noticed That Justice Never Applies To The Corrupt In Washington D.C.?

Explosion Of Bankruptcies & Layoffs In US Unlike Anything Seen Before