Home»US»Internal Report: More Than Half Of Border Patrol Agents Refusing Experimental Shot – May Be Fired
US

Internal Report: More Than Half Of Border Patrol Agents Refusing Experimental Shot – May Be Fired

Despite the fact that illegal immigrants do not have an unlawful mandate threatening them, more than half of the agents within the US Customs and Border Protection agency are facing the unlawful dictates of tyrant Biden to take an experimental shot for an alleged “virus” that has never been proven to exist over a threat that is anything but serious. Now, they may lose their jobs if they don’t take the shot by November 22, 2021.

Steve Watson has the story at Summit News.

An internal report from within the US Customs and Border Protection agency suggests that more than half the border patrol workforce remains unvaccinated, and that if vaccine mandates are implemented it could leave just 8000 officers on duty.

The document, obtained by Fox News, notes that 48 percent of agents have not registered their vaccination status, and of the 52 percent who have done that, ten percent are unvaccinated.

Former chief operating officer of CBP Mark Morgan, who obtained the internal report, told Fox News that Biden’s vaccine mandate is “going to take an agency that’s already gone through an unbelievable catastrophic crisis on the southwest border and deplete its resources further.”

Morgan also provided a screenshot from the report showing tables of different scenarios of depletion within the CBP. 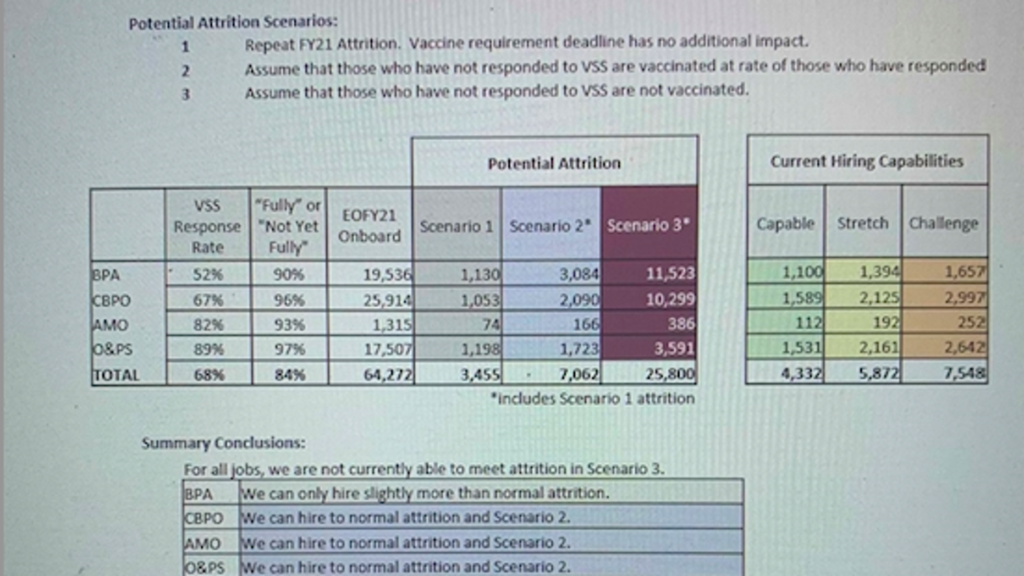 The screenshot highlights that “in the worst-case scenario, agents who have not reported their status have done so because they refuse to take the jab, and so they will be terminated (scenario 3). In that case, net attrition could exceed 11,523 agents, leaving a mere 8,013 border agents on patrol.”

If this scenario unfolds, it is likely that the border patrol would lose 59 percent of its workforce.

Imagine how that would affect the already rampantly out of control border crisis.

If the 10,000 or so border patrol agents who have yet to register their vaccination status do not do so this week, they will be offered counseling, then suspension, then termination, Morgan further noted, emphasising how the document “illustrates the potential impact that this mandate could have on the workforce.”

“So, an agency that is dealing with 1.7 million apprehensions, 400,000 got-aways, at that very moment, the same resources are going to be pulled away and distracted to deal with this mandate nonsense,” Morgan urged, adding that the counseling involves further “critical resources,” because border patrol leadership is involved.

It makes no sense.  It is unlawful!  Biden’s mandate has already been shut down and now the regime is looking to combat what the courts have already ruled unconstitutional.  We are dealing with a tyrant, and there’s only one way you deal with them:  You render justice upon their wicked heads.

Internal Report: More Than Half Of Border Patrol Agents Refusing Experimental Shot – May Be Fired