Marx’s Vision: “…enslaving subordination of the individual to the division of labor”

“In a higher phase of communist society, after the enslaving subordination of the individual to the division of labor, and therewith also the antithesis between mental and physical labor, has vanished; after labor has become not only a means of life but life’s prime want; after the productive forces have also increased with the all-around development of the individual, and all the springs of co-operative wealth flow more abundantly—only then can the narrow horizon of bourgeois right be crossed in its entirety and society inscribe on its banners: From each according to his ability, to each according to his needs! Karl Marx (Emp. added.)

It is not very difficult to foresee the near future of our country as this movement in behavioral psychology is thrust on our kids in the guise of “productive forces” as Marx defined them. These social and emotional techniques use sugar-coated terms like multi-tiered systems of support, response to intervention, positive behavior intervention and supports, character, grit, or emotion regulation and they are being pushed down our kids’ throats.  Parents have accepted them because they have accepted the ruse.

Bottom of the Pyramid Children

So how do Enterprise zones funded through education help poor children living in these poverty zones? Answer: Public-Private-Partnerships that scoop up BOP, bottom of the pyramid poor children. Who are these BOP kids? The children who are the 80% that will be re-skilled to become worker bees. 20% selected of the fittest are able to climb to the top of the pyramid but must have the right attitudes. 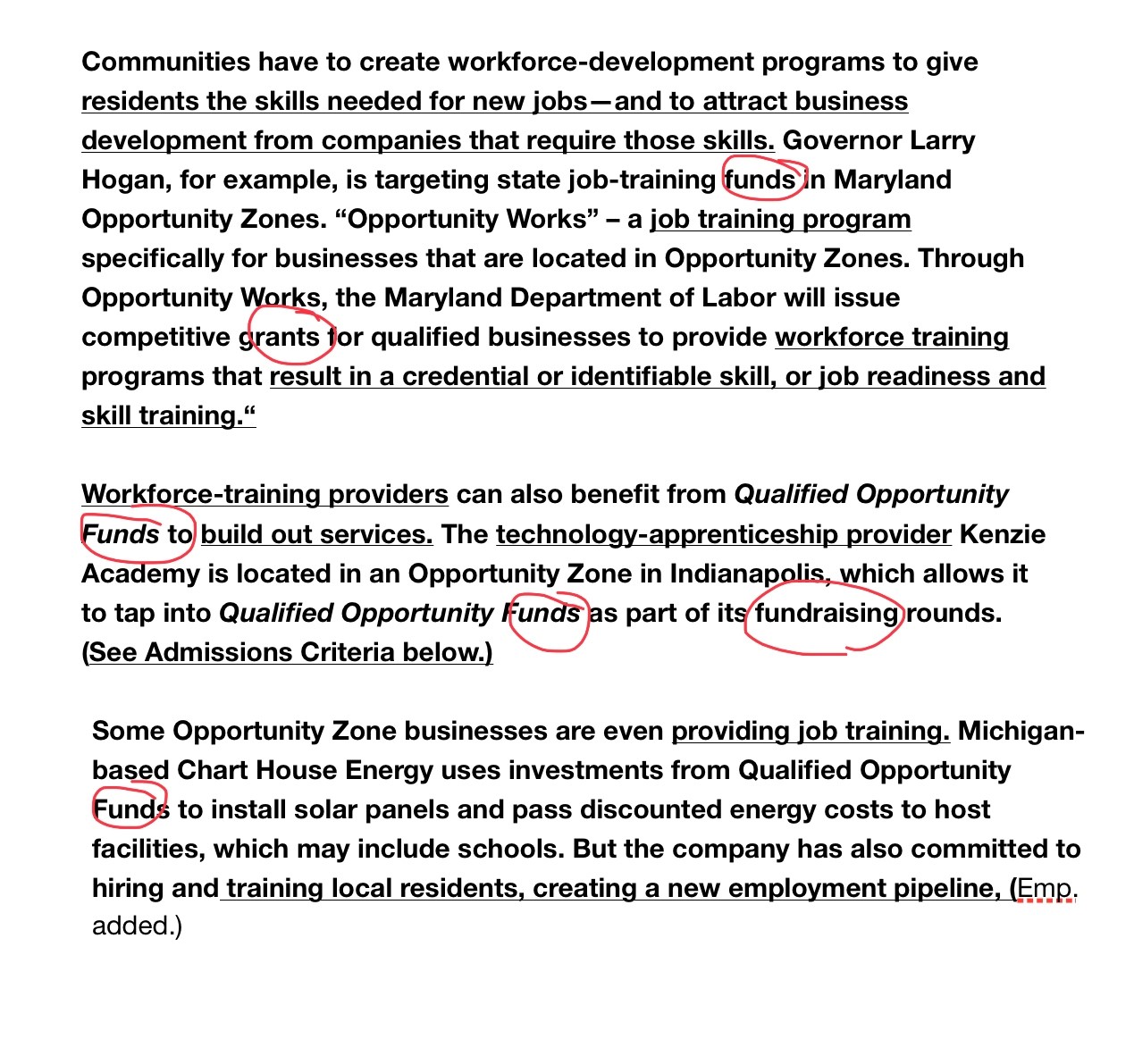 When analyzing the marketing for new available jobs in these Opportunity Zones, the focus is on business, not students. What actually is being taught to these young apprentices are skills that match the jobs and the schools equip those kids with a low-status education. Academics are replaced by “functional skills.” (See end of story graph.) A cooperative docile worker is needed, “to interact productively as a group.” The following are some so-called-do-gooder investments which Marx would have referred to as “co-operative wealth.” Read on to discover what is behind the magic words:

“We test for critical thinking skills, technical aptitude, and a good attitude. We DO NOT look at test scores or transcripts.” -Kenzie Academy

While these incentives appear to sound great, what type of skills are needed to be re-skilled? What these programs are advertising and what they are doing are very different things. Hand in hand federal money is being spread to accommodate both sides of the fulcrum, using BOP Title I poor children and targeting BOP Title I poor neighborhoods. Children, property, and curriculum are being targeted for reengineered renewal for the global economy and the dark side of capitalism that captures the data. 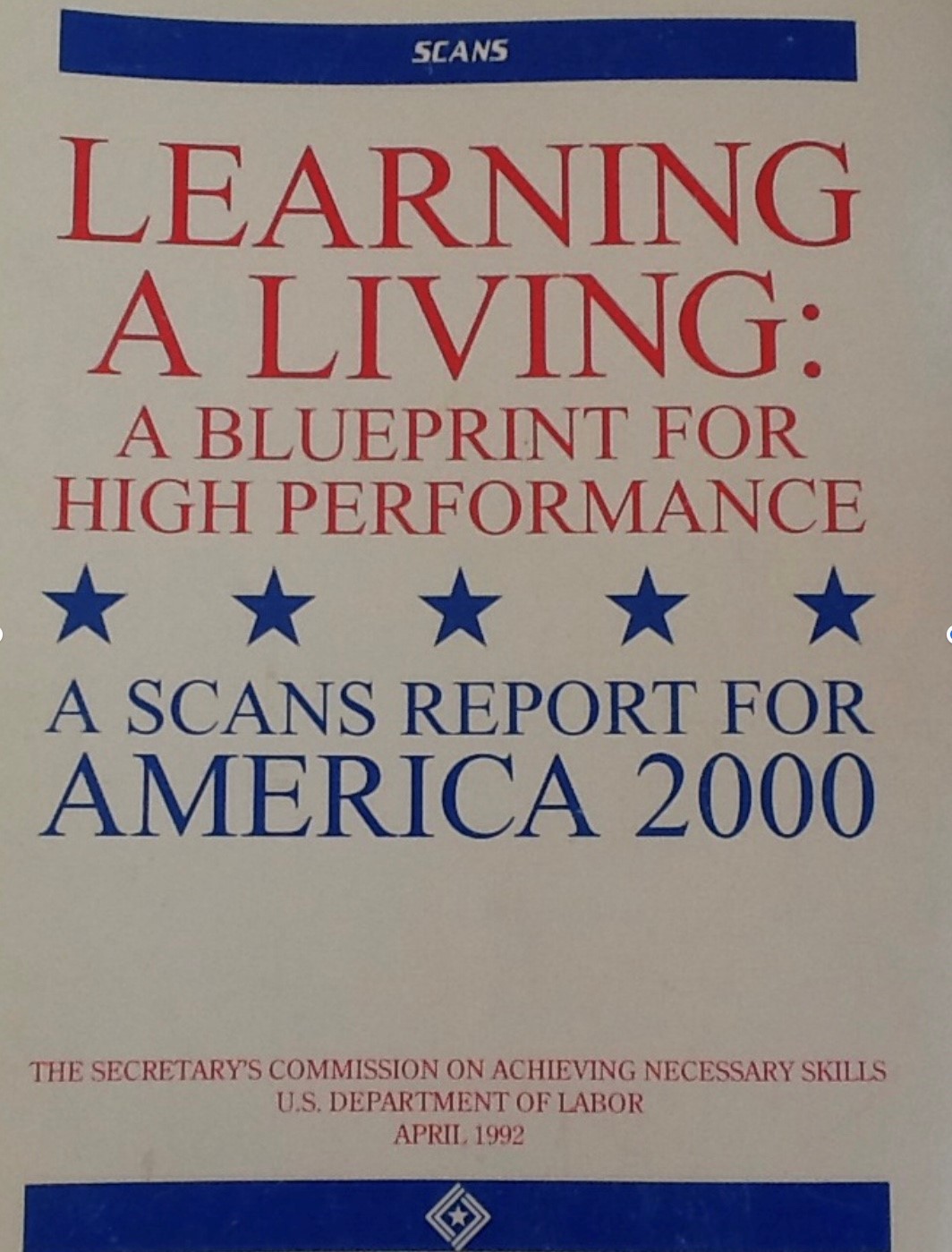 This is a soft-skills mold! The “antithesis between mental and physical labor will vanish” just as Marx had envisioned. Most people will say, “Its a job”. True, it is a job. Yet Americans will recognize the lower-level slotted manipulation.  In reverse, let’s say for example every child would have an individualized plan to attain his best opportunity instead of a static ceiling of meeting dumbed-down Common Core controlled standards. Education should be the floor of opportunity not the ceiling. Our kids are being stymied. NAEP test scores prove my point. (Source: https://www.usnews.com/news/education-news/articles/2019-10-30/across-the-board-scores-drop-in-math-and-reading-for-us-students )

The trend is reminiscent of the SCANS Department of Labor scheme to create human capital or the worth of the individual for industry.

I should remind readers that in the early 1990’s the Department Of Labor developed what the future global worker would think, feel, and act like. Defined in terms of assessing the future worker of tomorrow the DOL candidly reported in the SCANS Report  (Secretary’s Commission For Achieving Necessary Skills) that functional literacy and the right attitudes, values, and dispositions (personal qualities) were the most important aspects of education. It would be Business that would tell Education what was necessary for the future. Training would replace true education.

“Employers tell educators what work requires of schools, while educators certify what students know and can do.”

This lure of ‘get-off-tax-free’ for big business begins with a huge federal trough of funding upon poor communities but ends with the alarming doom of dumbing-down children and families to accomplish a fascist style of investment with a mental health bent. Do your children have the so-called “right” attitudes? Your child will be recycled to that re-skilled mold where mental health is the most important part of the new workforce with data collection to keep them on track. Pliable, moldable, agreeable gymbies. 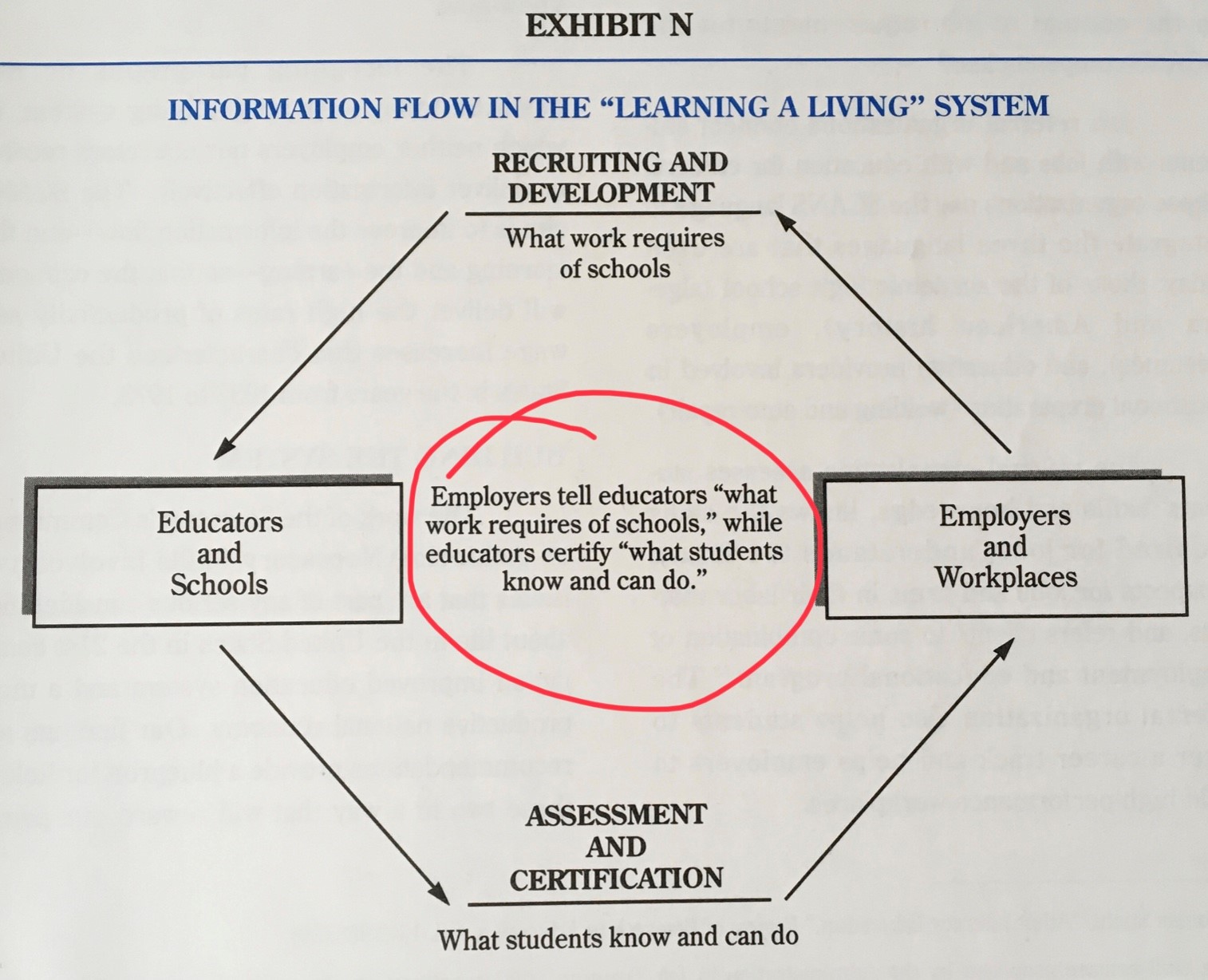 Realize that the President is pursuing the merging of the Department Of Education with the Department Of Labor (DOL) which has interesting connections to think about. He has also requested to open Child Labor laws so that younger children would be authorized to work in hazardous employment as apprentices. ( https://www.reginfo.gov/public/do/eAgendaViewRule?pubId=201804&RIN=1235-AA22

This dumbing-down process will have extreme debilitating effects on the future of education in the United States as our workforce begins to look like that of socialized countries. The “all around development of the individual” as Marx has written is very similar to the “well-rounded curriculum of the whole child” codified in ESSA. The goal-globalism. Its agenda is being accomplished. “From each according to his ability, to each according to his needs!” 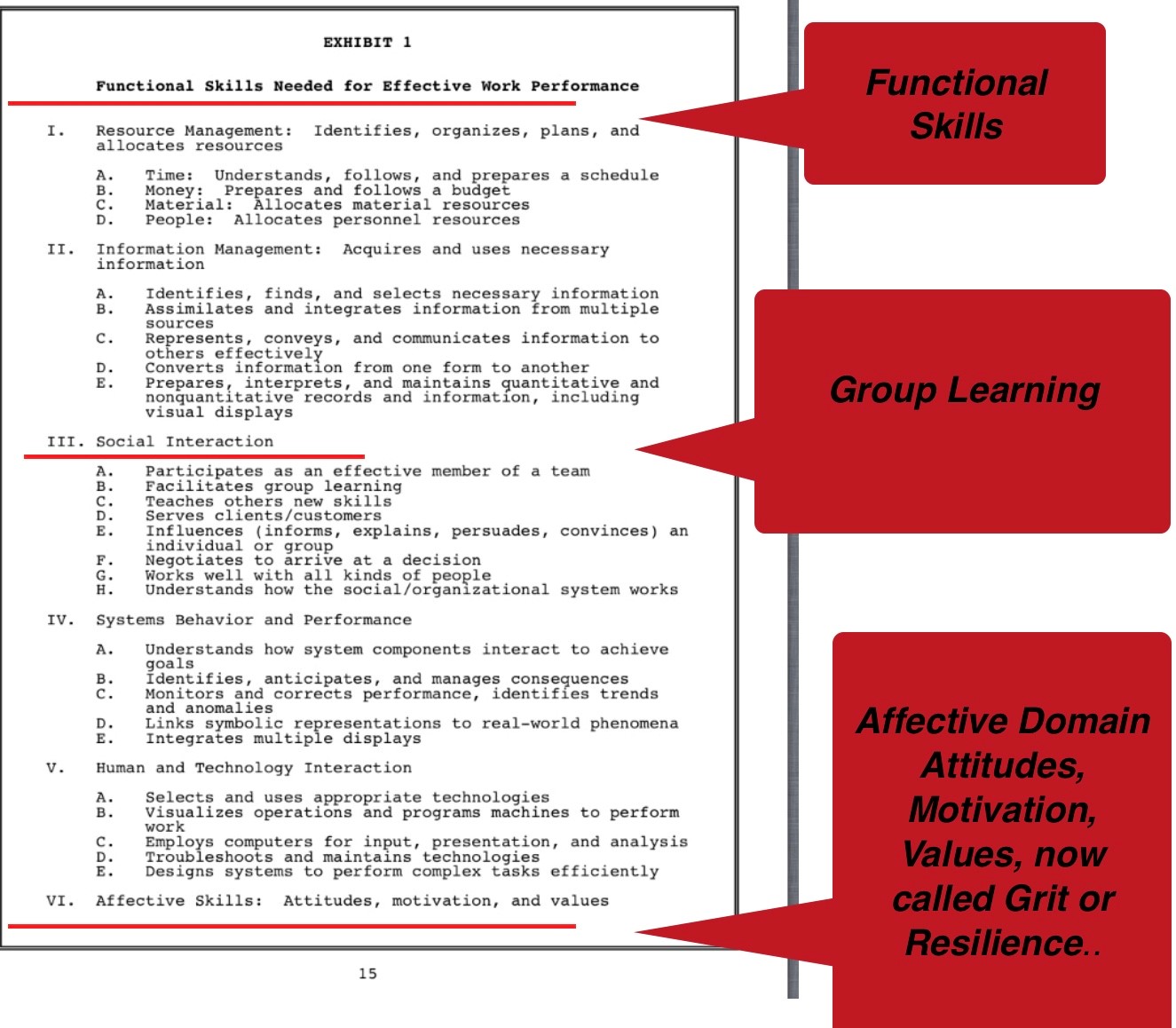 Anita B. Hoge is a lecturer, educational researcher, and parent. She is the subject & main researcher for the book, Educating for the New World Order. My story is told about an incredible journey into the devious & deceptive operations of our government to change the values, attitudes & beliefs of American children to accept a new world order. The first to document the expansive data collection operation of our government establishing micro-records on individual people in the United States. Experimentation, illegal testing, & data collection is exposed. She has lectured all over the United States in the 90's about illegal & controversial testing, curriculum, & collection of data by our government. Mrs. Hoge has also arranged & lectured town hall meetings all across the state of Pennsylvania to withdraw effective student learning outcomes to stop Outcome Based Education. Because of her efforts, Pennsylvania parents won a major victory against OBE in 1992 and she continues the fight to this day.
View all posts

Vigilantes with a Badge: How Warrior Cops Endanger Our Lives & Freedoms (Video)