When you hear the word “patriot” do you think of someone who stands for the national anthem, perhaps serves in the Armed Forces, and loves their country?  Well, “patriot” may become a dirty word if the new Domestic Terrorism Prevention Act of 2018 becomes a law. (And it probably will – we’ve seen the Patriot Act and the NDAA repeatedly pass with little more than a rustle of dissent.)

(1) White supremacists and other right-wing extremists are the most significant domestic terrorism threat facing the United States.

(2) An unclassified May 2017 joint intelligence bulletin from the Federal Bureau of Investigation and the Department of Homeland Security found that “white supremacist extremism poses [a] persistent threat of lethal violence,” and that White supremacists “were responsible for 49 homicides in 26 attacks from 2000 to 2016 … more than any other domestic extremist movement”.

And it’s true – we HAVE seen some horrible attacks on Muslims and people of color and those should be denounced.

But…what about Antifa? There is absolutely no mention of that group in the bill and they’ve wrought havoc all over the country, attacking anyone whom they suspected to be on the “other side”, causing exorbitant property damage, and promoting violence as necessary. The FBI and Homeland Security have both identified Antifa as domestic terrorists, yet they are conveniently exempt from mention in this bill.

And the most astounding thing is who they cite to do so. An excellent and thorough report on the Free Thought Project website explains.

…As Reason’s John Stossel pointed out recently, “SPLC once fought useful fights. They took on the Ku Klux Klan. But now they go after people on the right with whom they disagree.”

They are also making a killing while doing it.

Morris Dees, SPLC’s co-founder, promised to stop fundraising once his endowment hit $55 million. But when he reached $55 million, he upped the bar to $100 million, saying that would allow them “to cease costly fundraising.” But again, when they reached $100 million, they didn’t stop. Now they have $320 million—a large chunk of which is kept in offshore accounts. Really. It’s on their tax forms.

What is particularly disturbing about the SPLC is the fact that they fail to make any mention of openly violent and hateful group whose been caught time and again laying waste to property and innocent people with whom they disagree.

As Stossel points out:

In return for those donations to SPLC, the world gets a group that now lists people like Ben Carson and Fox commentators Laura Ingraham, Judge Andrew Napolitano and Jeanine Pirro as extremists—but doesn’t list the leftist militant hate groups known as antifa. (source)

Ben Carson? Judge Napolitano? Come on. That’s got to be a joke.

There’s a lot of recent history of demonization.

And that demonization isn’t just far-right, alt-right groups, and white supremacist groups. It’s veterans. Libertarians. People who support the Constitution as the governing document of our nation. It’s Christians and people with conservative beliefs. Basically, it’s anyone who questions the extreme left.

Most of the people in this group are decent people who don’t hate everyone of other races. We don’t intend to start militias to take out the Muslims in our neighborhoods. We want to get along and be free to believe as we believe. We aren’t rabidly frothing at the mouth in our bunkers, just waiting to light up the next SWAT team that happens by with a homemade RPG while wearing kitchen tile body armor.

But, as journalist Matt Agorist, an honorably discharged veteran of the USMC and former intelligence operator, points out, it’s becoming positively Orwellian. He shares these examples:

Most people who question the state do so out of a desire to prevent death, not foster it. People who questioned the narrative of weapons of mass destruction in Iraq did so because they wanted to prevent a war in which many would die. However, they were labeled as kooks and conspiracy theorists by the establishment—despite being proven right years later…

…A police sergeant in Morgan County, Indiana admitted in May of 2014 that his department had obtained an armored vehicle in part because of returning military veterans were deemed domestic terror threats by Homeland Security in 2009.

The MIAC Report, a federal training document famously presented to Missouri police in 2009, went as far as falsely tying supporters of former Presidential Candidate Ron Paul and the Constitution to “extremist groups” as well.

In 2014, a sheriff’s deputy admitted on video that these weapons of war were needed to fend off “constitutionalists” with firearms. (source)

There are many more examples of demonization. I’ve been writing about it for years. Like when a police drill back in 2013 focused on fighting off angry armed parents laying siege to a school to get to their children. And how everyone conservative or libertarian is a budding domestic terrorist. Or when a police chief warned that anyone who is a “gun enthusiast” should be reported to the cops. 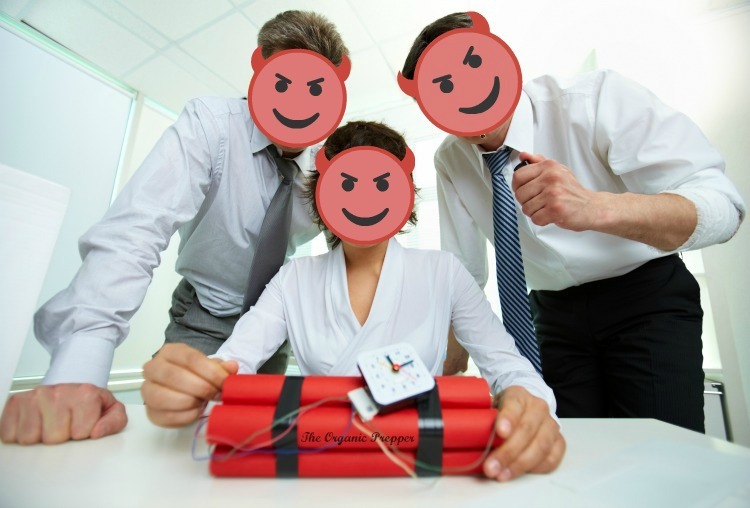 The media loves finding nutty survivalists committing crimes so they can paint us all with the same demented brush. For example, after the Boston Marathon Bombing, the media blatantly speculated that “patriots” blew up the runners.

And really, these are just a drop in the bucket. Loving liberty is a crime and you’re guilty without a trial in the eyes of the media and the establishment.

Back in 2012, the FBI told us how to identify the extremist next door with a helpful list.

Give yourself 1 point for each of these. If you score one point, you’re clearly a terrorist waiting to strike. You might be a Patriot Extremist if…

I guess this means we’re ALL potential domestic terrorists, right?

What are your thoughts on this?

Share you Domestic Terror Score and let me know what you think of this new bill.