For the background on what took place, I recommend you read this piece.

I was able to speak to Navy veteran CDR Walter Francis Fitzpatrick, III (Ret.) on Tuesday morning for a brief interview regarding what took place and his allegations, which I will be posting in a future article.

The affidavit in question was provided to me by Mr. Fitzpatrick on Monday evening.

The sworn affidavit was provided under penalty of perjury by then Acting Supervisory Special Agent of the FBI Mark A. Van Balen and was witnessed by C. Clifford Shirley, US Magistrate Judge.

In a similar manner to how things are assumed or even manipulated such as in the FISA fiasco, the Bundy Ranch standoff or the Oregon protests, the federal government either lies or manipulates or assumes thought crimes are real crimes.  Thoughts are not something men can punish unless it goes to an intent behind an actual crime.

In this case, Special Agent Van Balen seems to have perjured himself in the case against Darren Wesley Huff.

How did Van Balen commit perjury?

He said that Mr. Huff crossed state lines, from Georgia to Tennessee, with the intent to engage in a riot and civil disorder.

However, Fitzpatrick says none of that is true.  In fact, Mr. Fitzpatrick claims that Mr. Huff decided not to go to the courthouse and was later stopped as he drove his vehicle.  Not only that, the fact that Huff was not arrested for ten days indicates that he never engaged in any criminal activity.

Monroe County officials made no arrests, despite the presence of between 100 and 200 local, state and federal law enforcers, including a SWAT team and bomb-sniffing dogs, all of which turned out to be unnecessary.

Ten days later, without provocation, Huff was arrested by federal authorities while driving through Knoxville, TN and charged with “carrying a firearm in interstate commerce with the intent to use it in a civil disorder” and a second firearms charge.

Fitzpatrick has tried to get people to listen, especially in the climate that has been swirling around DC since Robert Mueller was appointed as special counsel to investigate President Donald Trump and the seemingly non-existent Russian collusion of those in his campaign.

No one seems to want to listen, so it’s up to us to push the story out there so that there has to be some serious investigation into the matter.

Mr. Fitzpatrick even received a letter earlier this month from the Tennessee Bureau of Investigation indicating that there is a criminal complaint against Mueller regarding his conduct in the case and that the matter is stored in an investigative case file at TBI. 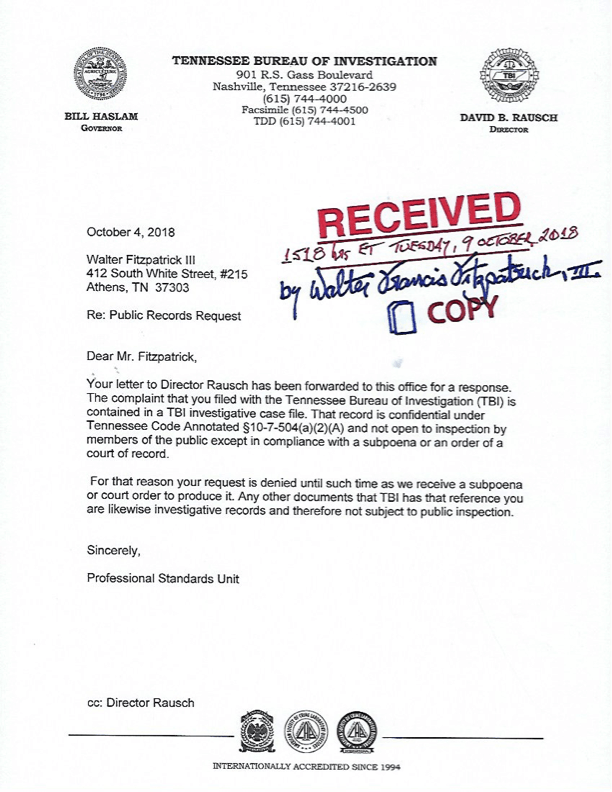 This information needs to get out there in the mainstream media and we need to deal with the corrupt Robert Mueller with law and justice.

Mr. Huff and Mr. Fitzpatrick have served our country honorably, isn’t it time we serve them?

I’ll have upcoming articles on this story over the coming days.  So, stay tuned.

Mattis: US Needs ‘Offensive Weapons In Space’ For Defense