Oregon: Mom Thrown In Jail & Her Child Stolen For Successfully Treating Her Cancer With CBD Oil

Editor’s Note:  Shame on this tyrannical sheriff!  When are the good people in Oregon going to have enough fo their corrupt government there?

In the land of the free, parents whose children voluntarily wish to abstain from chemotherapy and have their parent’s consent, can and will be kidnapped and their parent jailed. This is exactly what is happening to Christina Dixon and her daughter Kylee—in spite of the fact that stopping chemo and using alternative treatment has worked.

When Kylee was 11-years-old, she was diagnosed with Undifferentiated Embryonal Sarcoma, a rare kind of liver cancer that happens mainly in children. For several grueling months, Kylee underwent chemotherapy for the cancer, which they said began to kill her.

When Christina and Kylee decided that Kylee had enough of the chemo, they decided to stop and refused the doctor’s orders. For making their own decision to stop the chemo and switching to an alternative treatment — which according to Christina, literally saver her daughter’s life — Kylee was kidnapped by the state.

The act of stealing someone’s child over medical decisions happens so often that there is a term for it: medical kidnapping.

“When you separate a parent from a child based on medical reasons—to me that’s concerning,” said Christina.

Christina had no ill intentions in mind when seeking out alternative treatments and explained that her daughter’s chemotherapy was agonizing and all she did was suffer.

“The best way I can describe it is like my kid was on death row,” said Christina. “Every single time—you literally feel your kid’s life getting taken away.”

They stuck out the chemotherapy for six months, but it was far too painful and evidently not working. So, they both made the decision to stop it and seek a different treatment.

“I couldn’t do it anymore and my daughter wanted to go home. She had enough too. She begged me to take her home before they did more chemo,” said Christina.

In June of 2018, Kylee left the hospital and began her natural treatment using vitamins, herbs, and pure CBD oil for the cancer. And, according to the family, it worked.

“It started reversing her tumor for the first time,” said Christina, who claimed the tumor reduced in size by 90% during the past year.

“My daughter’s cancer has not spread. And no, she hasn’t had chemotherapy or any other treatments for the last 11 months,” explained Christina. “She is thriving, surviving and doing better than ever.”

Despite the dramatic improvement in Kylee’s health after they abandoned chemotherapy, the state still felt it necessary to intervene. In June, they came looking for the mother and daughter, with police claiming Christina had kidnapped her own daughter and was treating her against her will. All of this, of course, was lies, according to Christina.

On June 10, 2019, the Clackamas County Sheriff’s Office issued bulletin titled, “MISSING/ENDANGERED JUVENILE.” The alert included photos of Kylee Dixon and her mother, Christina along with a description of a car they might be driving, as KGW8 reports. 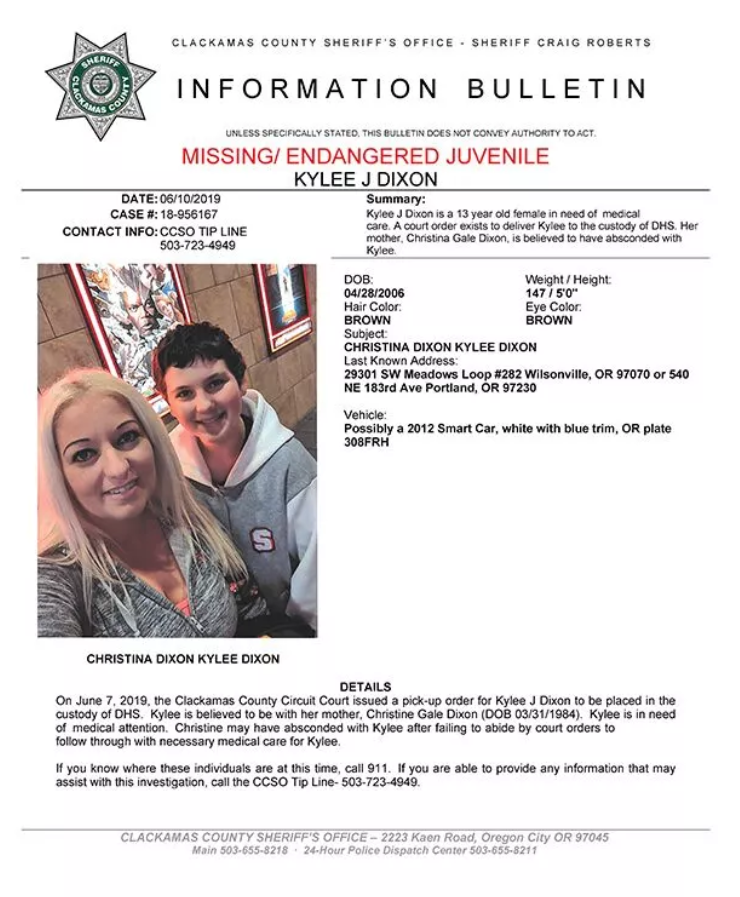 “Kylee is in need of medical attention. Christine may have absconded with Kylee after failing to abide by court orders to follow through with necessary medical care for Kylee,” the police bulletin read. “If you know where these individuals are at this time, call 911.”

Police were treating this family like criminals, all because they were seeking to treat their cancer in an alternative way—which happened to be working. Nevertheless, to “protect” Kylee, when police finally caught up with them, they kidnapped her. Then, last week, while fighting to get her daughter back, Christine was kidnapped as well and thrown in a cage. She was charged with two counts each of first-degree custodial interference and first-degree criminal mistreatment at the Clackamas County Jail, according to FOX 12.

A reporter from FOX 12 spoke with Christina last week and asked if she ever thought she’d be in jail over this incident.

“No, definitely not. Cause I wouldn’t think this is possible for any parent to go through, for getting charged for helping my daughter live makes no sense,” Christina told FOX 12. We agree, yet we are witnessing it unfold right now.

Adding to the insidious nature of the charges, the Oregon Department of Human Services released a statement as to why they went after the mother and daughter and specifically cited CBD.

“The child has been previously diagnosed with cancer, specifically an embryonal sarcoma, after initially seeking treatment, mother withdrew the child from treatment against medical advice, and mother has failed to follow through with recommendations of child’s medical team, which creates a risk of harm to the child.

The mother has elected to treat child’s cancer exclusively with CBD oil, which is not a medically recognized treatment for the disease with which child has been diagnosed, will have no efficacy in treating child’s cancer, and child’s medical team and specialists in pediatric oncology have stated that without further treatment child will die of the disease, which creates a risk of harm to the child.”

On Monday, Kylee is scheduled to go before the DHS to plead her case. Currently, her daughter is in California and she can only talk to her mother by phone.

In the land of the free, your child can be stolen from you by the government and you can be thrown in a cage for treating your daughter’s cancer — successfully — in a manner in which the state disapproves. And we call this “Freedom.”

If you would like to keep up with “Kylee’s Fight,” you can do so on their Facebook page setup here.

Warning Came In 2018 Before Plandemic: Today In Pakistan They Shut Off Phone Service To Those Who Refused Vaccines

Biden Administration: Americans, Report Family & Friends Who Have The “Potential” For Radicalization

Oregon: Mom Thrown In Jail & Her Child Stolen For Successfully Treating Her Cancer With CBD Oil