Following the death of Homeland Security whistleblower Philip Haney, the sheriff’s office declared his death to be a suicide.  However, the sheriff backtracked along with a statement from the coroner that had not been determined.

Statements came from the Amador County Sheriff’s Office in the form of the claim that Haney “appeared to have suffered a single, self-inflicted gunshot wound.”

However, on Sunday evening, Sheriff Martin A. Ryan provided a statement based on the coroner’s investigation, “Unfortunately, there was misinformation immediately being put out that we have determined Mr. Haney’s death to be a suicide. This is not the case.”

“We are currently in the beginning phase of our investigation and any final determination as to the cause and manner of Mr. Haney’s death would be extremely premature and inappropriate,” the press release stated.  “No determination will be made until all the evidence is examined and analyzed.”

The Sheriff’s office has scheduled a forensic autopsy “to be performed by forensic pathologists from the Sacramento County Coroner’s Office.”

The Sheriff’s office continues to canvas the area where Haney was found, interview neighbors in the RV Park on the day of his death and check for video surveillance that might exist.

Here’s a copy of the statement. 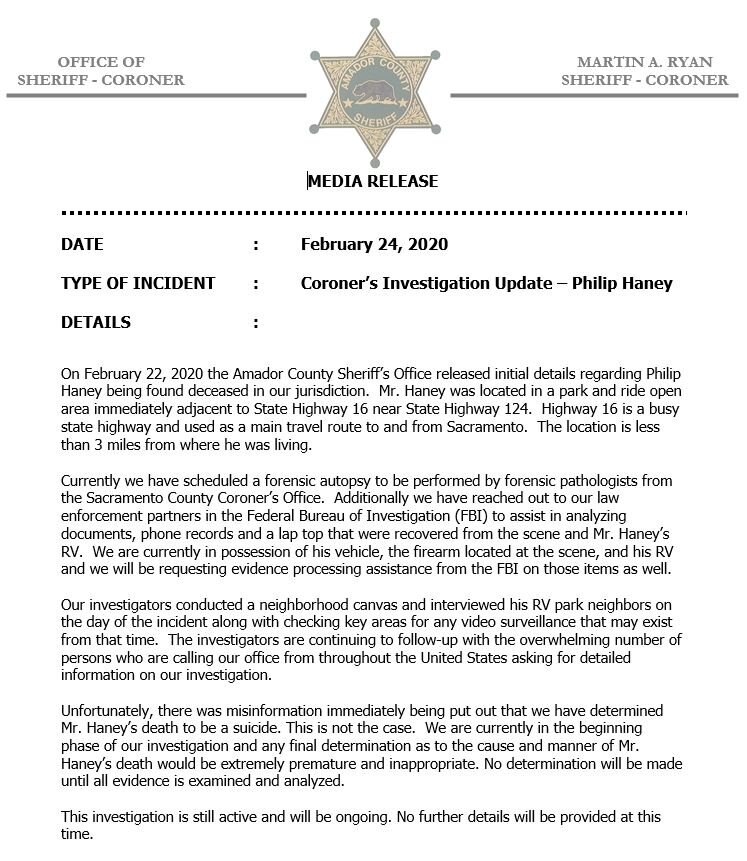 WND reminds us of why Philip Haney was so important.

Haney explained to Kelly how his case could have prevented the massacre if it had not been shut down.

See one of Sean Hannity’s many interviews with Philip Haney:

In June 2016, Haney’s Senate testimony of his agency’s politically correct “purging” of intelligence on terrorist networks in the U.S. caused a stir on Capitol Hill. He told a subcommittee of the Senate Judiciary Committee chaired by Sen. Ted Cruz, R-Texas, that the Obama administration “modified” or eliminated more than 800 of his records related to the Muslim Brotherhood network in the U.S. because they were deemed to be an offense to Muslims.

“I have no idea,” Johnson replied. “I don’t know who Mr. Haney is. I wouldn’t know him if he walked in the room.”

“So, you have not investigated whether your department ordered documents to be modified?” Cruz followed up.

“No, I have not taken the time to investigate what Mr. Haney says. No.” Johnson said.

Cruz then asked Johnson if it would concern him if Haney’s testimony was accurate.

“Senator, I find this whole debate to be interesting, but I have to tell you,” Johnson replied, “when I was at the Department of Defense giving the legal sign-off on a lot of drone strikes, I didn’t particularly care whether the baseball card said Islamic extremist or violent extremist. I think this is very interesting, but it makes no difference to me in terms of who we need to go after, who is determined to attack our homeland.

“I think this is all very interesting, makes for good political debate,” he continued, “but in practical terms, if we, in our efforts, here in the homeland, start giving the Islamic State the credence that they want, to be referred to as part of Islam, or some form of Islam, we get nowhere in our efforts to build bridges with Muslim communities.”

In his first opportunity to ask questions, Cruz told Haney his testimony before the committee was “exceptionally important.”

“I commend both members of the media and the American public to examine your testimony closely, because you have described a systematic policy, indeed of scrubbing, sanitizing, erasing references to radical Islam,” Cruz told the recently retired DHS officer.

In addition, Haney said, a highly successful case he helped develop as a member of one of the National Targeting Center’s advanced units was shut down by Hillary Clinton’s State Department and the DHS Office of Civil Rights and Civil Liberties out of concern for the “rights” of foreign Muslims. And after Haney retired honorably in 2015, he discovered that had his case continued, it might have prevented both the Orlando and the San Bernardino attacks.

Along with the quashing of the case in June 2012, the administration subsequently ordered the deletion of an additional 67 records concerning a related network.

The Acknowledgement of God’s Authority Over America is Constitutional

Minneapolis City Council Somali Candidate: "We Going To Take Over"