Home»US»Ping! We’re “It”: The UN Education Agenda & How The Trump Administration Is Advancing The US “All The Way” To The UN’s Roadmap/Vision
US

Ping! We’re “It”: The UN Education Agenda & How The Trump Administration Is Advancing The US “All The Way” To The UN’s Roadmap/Vision

Anti Fed Ed Warriors, if you’ve followed my blog for long, you know that I’ve long exposed the UN (United Nations) and its grasp on American education EVEN with reduced funding by the U.S. federal government.

If you’re new to the blog and you aren’t aware of this, I invite you to go to my archives. There are about 30 pages full of articles for your research. 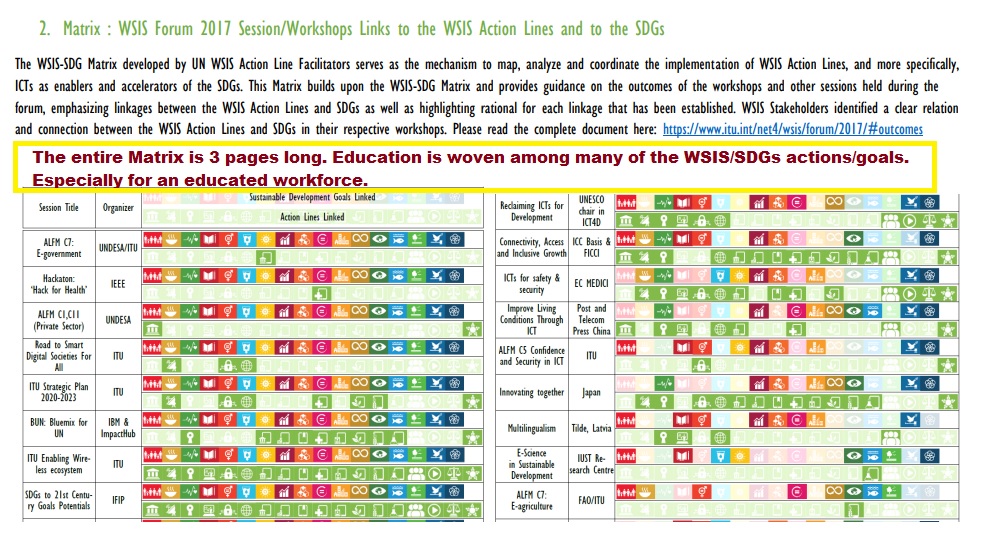 The featured image was from 2017. It was featured in an article about the massive technology efforts embedded in the US BECAUSE of the SDGs (Sustainable Development Goals). Those same Goals are why we have Science, Technology, Engineering, (the Arts), and, Math (STEM/STEAM) in not only, education, but EVERYWHERE in the USA. 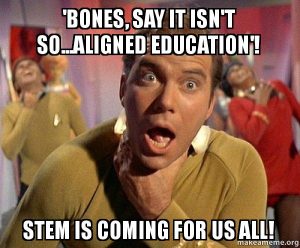 As you may know, the UN has many technology companies and entities devoted to using technology against us.

It’s to track us…it’s to ‘ping’ us. If you’ve ever watched a movie with submarines, you know how pings are used to locate the precise location of another ship or sea creature.

As we know, Warriors, the current push for 5G will ‘ping’ us, no matter where we are. Nowhere is this more certain, than in education.

However, while that’s part of my point in today’s researched article, it’s not the ONLY point.

The UN’s “Roadmap” For America:

Warriors, what do ‘pings’ have to do with a roadmap? If you use GPS, you know the technology pings when you arrive at your destination. You have the freedom to choose where you’re going.

In the context of this, the UN has plotted our trip to THEIR destination. This ‘roadmap’ includes ALL the SDGs. As such, ALL the SDGs are woven into education. That ‘education’ isn’t reserved for public schools. It’s not reserved for school-aged children, either. Below, is an archived image where you can see only SDG #4 is solely for education (Quality Education for All). However, the other 16 encompass education. Especially SDG #8 (Decent Work For All).

So where is the UN taking US? Let’s find out.

Warriors, if you can enlarge the image above, you can see this is the CURRENT status of the United Nation’s 74th session (was to held in New York, but has shifted to virtual).

Since 2020 is the official 75th anniversary of the UN, BIG plans have been in the making since 2018. Due to COVID-19, all plans are on hold, as of right now. The UN President’s roadmap has ‘quality global education’ as a top priority.

The United States is 100% locked in on this. The “roadmap” refers to the UN Youth Plenary session. That session is centered on the theme you see below:

“The Future We Want, the UN We Need” is the theme, if you cannot read it. REALLY? What happened to the US we need?

Warriors, let’s remember, mainstream media and even some independent media sources say that this is only in our public schools. IT’S Not! It’s in our communities and every education-based/related entity possible!

This means the access is open to everyone, even homeschoolers. (*Note: if you’ve missed how the UN has cracked open the homeschooling protection from indoctrination, I urge you to look here. There are 17 pages of articles I’ve written on the topic.)

Since the UN is helping advance the ‘stay at home COVID-19’ efforts, look at this recent UNICEF video from India. Notice the portion about education. Do you hear the tone of conformity?

Speaking of conformity, do you see the image below? The UN’s 74th President is conducting a virtual meeting, yet has no mask. His co-worker, however, does. In every media slide I found, almost no ONE is wearing a mask, especially the President. Where else are we seeing this in US government? 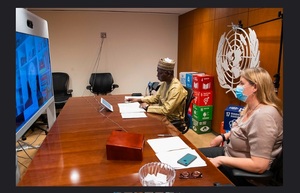 Where Else Does The Roadmap Take US?

Warriors, elsewhere in the UN President’s roadmap (which, by the way, is ‘his’ VISION for the world), you’ll see how to finance the agenda of the UN (at member-state’s cost), the continued push for 5G and AI, the overkill of public-private partnerships, the increased tolerance about genders, and, anything else that can be thrown into ‘education’, as well as our lives in everyday communities.

Remember, the UN’s roots are not godly. In 2014, I showed you much evidenced research about the satanic vents to the UN. In 2017, you were shown how the After School Satanic Clubs were using the UN’s STEM to help ‘education’ become more global. (*Note, by 2017, the US has bought into STEM 100%, so much so, billions has been spent to implement it everywhere in the US.)

Warriors, also remember that many US Presidents have fully supported the UN, even our current one! Yes, even with cutting funds to UN entities.

How is the possible? Because the roots of the UN are far too embedded in the US for mere cutting of funds to make a drop in the bucket! 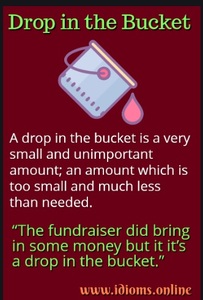 President Trump’s Past Real Estate Ties to the SDGs?

Back in 2009, the New York City government started work on a comprehensive waterfront plan which would address commerce, education, and, other topics. It was called Vision 2020. In 2012, the project received an award for its work.

Warriors, it’s interesting to note that the NY’s Vision 2020 has ‘sustainability’ embedded 21 times in the document. The most ‘telling’ about a UN agenda type entity was found on page 110, where the NY-CT Sustainable Communities Consortium (grant award given by the U.S. Dept. of Housing/Urban Development) is brought up.

If you look at the 2011 Press Release for the Consortium, you can see the goals were globally competitive regionally connected sustainable cities and towns in NY and CT. However, the press release also show the U.S. HUD’s goal of duplicating this across the United States. (*Note: this implicates former US President Obama.) 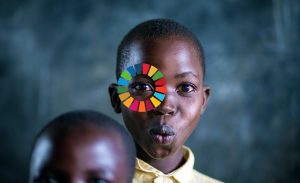 So, how does this involve the current President of the US?

We have to go back to his days as a real estate guru for the connections.
First, in 1992, Donald Trump, as a real estate magnet, had produced a waterfront plan which the NYC Council eventually rejected. (*Note, some of those same waterfront properties were later inserted in the Vision 2020 Plan.)

Secondly, later in 1992, Mr. Trump presented a scaled back version for waterfront plans. It was expected that it would pass the NYC Council.

As things went on,  the Riverside South Urban Development went through. Mr. Trump’s partnership with at least 6 civic organizations in NYC was a $3 billion dollar ‘investment’ and covered at least 50 acres of waterfront. Mr. Trump, then (1994) sold the Development to Chinese investors. Here’s an excerpt of the article:
“Trump sold Riverside South to investors from Hong Kong and mainland China (Polylink International), who began construction in 1997. In 2005, the investors sold the remaining unfinished portions to the Carlyle Group and the Extell Development Company.”

IF you wish to read the account of the Trump-Polylink sale, go here. If you are interested, the Carlyle/Extell entity is a global private equity firm. They have ties to the Deutsche Bank.

TRENDING:  Despite No One Wants It & It Not Being Authorized In The Constitution, Trump Admin Announces Ambitious (& Tyrannical) Vaccine Schedule

In 2019, the Deutsche Bank committed itself to the UN’s banking practices, which, fully support the implementation of the SDGs. “Deutsche Bank has signed the Principles for Responsible Banking formulated by the UN Environment Programme Finance Initiative (UNEP FI). The Principles provide a framework for the sustainable banking system of the future. The purpose of the Principles is for the banking industry to play a leading role in supporting the UN Sustainable Development Goals (SDGs) and the Paris Climate Agreement. The Principles will be officially signed and launched on September 22 during the United Nations General Assembly.”

Warriors, it’s Deutsche Bank which can be directly tied back to Mr. Trump. Read this 2020 article.

If you need more evidence that, as President, Mr. Trump and his administration are continuing the quest to take America ‘all the way’ to the UN’s Roadmap/Vision, consider this 2017 article about offshore drilling and ‘green energy’. Both of these directly are addressed in the UN’s SDGs. Both of these activities are also a direct continuation of former President Obama’s policies and actions. 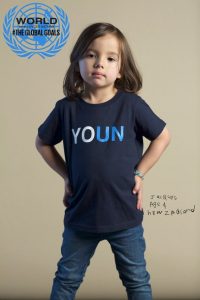 Warriors, as you know, the SDGs are very much in the forefront with the COVID-19. Most specifically, SDG #17, which is all about the partnerships across the globe for unity. Look at the ‘current pings’ the Trump Administration is setting up in direct or indirect alignment with PARTNERSHIPS. Partnerships for vaccines, economics, technology (especially in on-line education). Look at the UN ties to these partners! CDC, WHO, World Bank, Deutsche, the different governments, and, drug companies. 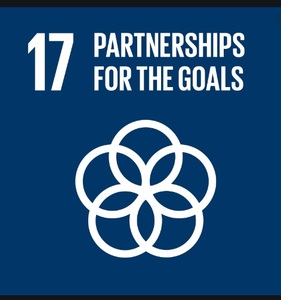 Our solution?! Buck the systematic oppression of an unAmerican goverance! Get rid of anyone and everyone who is supporting it, funding it, setting us up! In other words, if they ‘ping’ us, we ‘PING’ back! Not only is it our duty to our future generations, it’s our responsibility as Americans!

American Militia Freedom Forces: “We Are At War” – Time For The Rightful Rulers “Ordained By God” To Do Our Duty Under God

Serial Liar & Nazi CDC Director: “There Is a Plan, Should These People Not Want To Be Vaccinated” To Reeducate Them (Video)

UK Insanity Coming to US Soon

Ping! We’re “It”: The UN Education Agenda & How The Trump Administration Is Advancing The US “All The Way” To The UN’s Roadmap/Vision