Pope Francis is among those who did not learn history and so is destined to repeat it. That, or he is just another in a long line of papal antisemites. I think it’s the latter.

Hitler’s Pope, Pope Pius XII, before and during the Nazi era, assisted in the legitimization of Adolf Hitler’s Nazi regime in Germany, through the pursuit of a Reichskonkordat (“Concordat between the Holy See and the German Reich”) in 1933.

How is this any different?

Not only did the Vatican help to norm and mainstream Hitler in the early 30’s, their work with Nazis carried on even after the war.

Walter Rauff, a former SS colonel wanted for the mass gassing of Jews in mobile death vans, told in 1962 of having been given refuge in Vatican City convents for 18 months after the war. 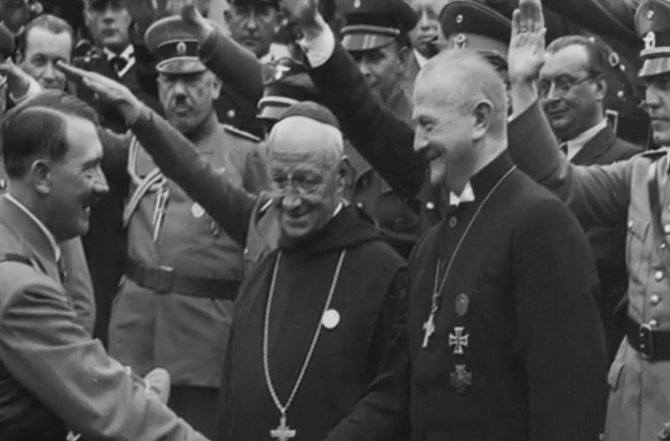 Israeli soldiers killed 15 Palestinians who authorities said were attempting to breach or harm the Israeli-Palestine border fence in Gaza during the March 30 “Land Day” protest. At least 10 of those killed were identified as members of Hamas and other terrorist organizations, and two of them were Hamas commandos, the Israeli Defense Force claimed March 31, according to The Times Of Israel. Francis lamented the violence during his holiday message, “Urbi et Orbi,” saying the conflict claimed the lives of defenseless people.

Francis called for “reconciliation for the Holy Land, also experiencing in these days the wounds of ongoing conflict that do not spare the defenseless,” according to Reuters.

Hamas, a known Palestinian terrorist organization that is one of the organizers of the protests, acknowledged five of those killed as their own gunmen on Saturday. The IDF blamed Hamas for the violence and deaths during the protests, which Hamas called “The March of Return.” Hamas used women and children to bait Israeli forces, sending them across the border in an attempt to make martyrs of them, IDF also noted in a statement issued after the Good Friday protest.

Hamas sent a seven-year-old girl across the border, but the Israeli military returned her safely to her family on the other side of the border, IDF said in one instance. As for the rest of the 17,000 Palestinians who mobbed the border fence, IDF said their demonstrations were far from peaceful.

“The IDF estimates about 17,000 Palestinians in five locations along the fence, burning tires, and throwing Molotov cocktails and stones at the fence and at IDF troops who are responding with riot dispersal measures and shooting at a number of key instigators,” IDF said in a statement, according to Jerusalem Post.

“The Hamas terror organization endangers the residents of the Gaza Strip and uses them as cover for terrorist acts. Hamas is responsible for all the events and their consequences,” IDF added.

Palestinian President Mahmoud Abbas blamed Israel for the violence and rejected the prospect of negotiations with Israel.

“The marches today prove that the Palestinian people will not aid any plan that wishes to close the lid on the Palestinian issue,” Abbas said, according to Jerusalem Post. “Jerusalem will remain Arab.”

Mohammed Abu Tair of Palestine’s Legislative Council lauded the protests as a rejection of President Donald Trump’s “deal of the century” and the decision to move the U.S. embassy to Jerusalem in recognition of the city as Israel’s capital.

The protests along the Gaza border fence are expected to continue until May 15.

“May there be no lack of solidarity with all those forced to leave their native lands and lacking the bare essentials for living,” Francis added after lamenting the conflict in Syria, Ukraine and several other countries, according to Times Of Israel.