Common Core Diva Lynne Taylor wrote, “In just a few days, the Reagan Institute Summit on Education (RISE) will host its 4th annual summit. The Reagan Institute is part of the US Presidential Library named for the former President #40. Along with the Library, there’s a Foundation, as well as the Institute. Each arm is responsible for carrying on President Reagan’s legacy. However, when it comes to education, his legacy is not one we should be celebrating, much less, still marching to.

This excerpt from Charity Navigator about the Reagan Foundation/Institute should tell you why we shouldn’t be celebrating Reagan’s legacy: ‘The Ronald Reagan Presidential Foundation and Institute is a non-profit, non-partisan organization dedicated to the promotion of the legacy of Ronald Reagan and his timeless principles of individual liberty, economic opportunity, global democracy, and national pride.’”

Lynne joins me in this episode to talk about why this is unlawful and the dangers it poses nearly 40 years after Reagan signed onto Soviet-style “education.”

Articles, previous shows and documents mentioned in this episode.

Charlotte Iserbyt: Reagan, The Soviets & The Deliberate Dumbing Down of America

The CCSS Machine speakers (we’ll be looking at many of these dunderheads): https://www.reaganfoundation.org/reagan-institute/programs/reagan-institute-summit-on-education/

This image from the Reagan Inst’s current slides promoting RISE: 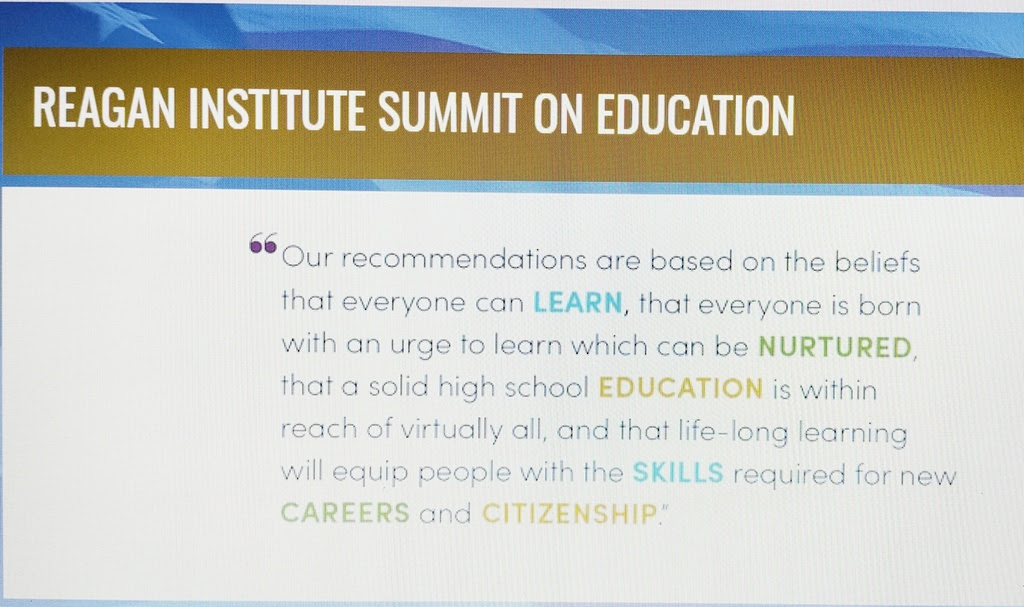 1983 Proclamation for the Year of the Bible: https://www.presidency.ucsb.edu/documents/proclamation-5018-year-the-bible-1983

This image from my article/our interview on Reagan’s nod to Noahide, refer to the last point in the image:

All the Related Resources for the Archive/Audience:
1) From my 2020 article/interview displaying the trail of tyranny from Pres. Johnson to then, Pres. Trump, these Reagan specific links:

2) From Charlotte’s website, The Deliberate Dumbing Down of America, her link to all the research on former Pres. Reagan.

3) From John Klyczek’s book, “School World Order”, Reagan was mentioned at least 11 times. The most revealing references are below:

On page 10, you’ll learn how former Pres. Reagan’s Task Force on Private Education began the farce called ‘school choice’. How is it a farce? The illusion of freedom of choice cloaked in out and out fascism by using money to privatize public education. The Every Student Succeeds Act (2015, former Pres. Obama) codified ‘school choice’. On pages 16-19, the author gives you a time line of how Executive Orders for charter schools (from Pres. #40) helped further the fascism and illusion of ‘school choice’.

Page 54 details the OBE (Outcome Based Education) models from BF Skinner, which not only Reagan embraced, but every President since, including BOTH the Republicans AND Democrats! Pages 91-93 detail what, by far and away, was Reagan’s biggest nod to the UN and globalism, especially as we are seeing in the AI (Artificial Intelligence) push in education. Project BEST (Better Education Skills Through Technology). From Reagan to Biden, this Project has been cast aside in some ways; increased in others, and was 100% totally embraced by former Pres. Trump, when it gave the Project new life. Page 107 shows you how Reagan picked William Bennett (as Sec. of Education) was later tied to Betsy DeVos (before her rein as Sec. of ED) via virtual public schools (K12, Inc; which is thriving under the COVID crisis in education). K12 and DeVos can also be tied to ALEC, which is a HUGE CCSS Machine member organization as well as undermining our entire nation!

From her Deliberate Dumbing Down of America book, page 176:

1)  Most important to include is information regarding Reagan’s White House Private Sector Initiative, 1981, at which I was the Dept. of Ed liaison.  This initiative formalized the conservatives’ future merging of the public and private sector (corporate fascism/communism) which we see around us today.  EARLY IN 1981 THE PRESIDENT’S TASK FORCE ON PRIVATE SECTOR INITIATIVES WAS INstalled at 734 Jackson Place, N.W., Washington, D.C. Membership listed on The White House letterhead read like a “Who’s Who” of individuals in government agencies, universities, tax-exempt foundations, non-governmental organizations, business, media, labor unions, and religion. The names of some individuals on the task force follow: William Aramony, president, United Way; William J. Baroody, Jr., president, American Enterprise Institute; Helen G. Boosalis, mayor, City of Lincoln, Nebraska; Terence Cardinal Cooke, archbishop of New York; Governor Pierre S. Dupont, Delaware; Senator David Durenberger; Luis A. Ferre, former governor of Puerto Rico; John Gardner, chairman, Independent Sector; Edward Hill, pastor, Mt. Zion Baptist Church; Michael S. Joyce, executive director, John M. Olin Foundation; Edward H. Kiernan, president, International Association of Police; Arthur Levitt, Jr., chairman, American Stock Exchange; Richard W. Lyman, president, Rockefeller Foundation; Elder Thomas S. Monson, The Mormon Church; William C. Norris, chairman and CEO, Control Data Corporation; George Romney, chairman, National Center for Citizen Involvement; C. William Verity, Jr., chairman, Armco Steel, Inc.; Jeri J. Winger, first vice president, General Federation of Women’s Clubs; Thomas H. Wyman, president, CBS, Inc.; and William S. White, president, C.S. Mott Foundation.5 This totally new and un-American concept of partnerships between public and private sector has been readily accepted by our elected officials who ignore its roots in socialism and its implications for the discontinuation of our representative form of government and accountability to the taxpayers. Under the “partnership” process, determining responsibility when something goes wrong is like pinning jello to the wall.
Such a change in government, if presented in clear language to citizens at the polls, would be rejected. However, when implemented gradually, using the Marxist-Hegelian Dialectic, citizens don’t even notice what is happening. The shift is away from elected representatives. In time, after voters have become even more disenchanted with the candidates and election results, fewer and fewer citizens will vote. At that point a highly-respected member of the public will enter the picture to propose a solution to the problem: some sort of compromise toward parliamentary form of government found in socialist democracies which will be acceptable to Americans unfamiliar with the protections guaranteed by the U.S. Constitution.
One says to oneself, confidently, “This will never happen.” Look around you. What do you see? Site-based management in your local schools, transferring decision-making, traditionally
exercised by elected school boards, to politically correct appointees and the creation of unelected task forces at all government levels; proposals to “separate school and state” which make no mention of governmental and social structure consequences—efforts to have government money (taxes) pay for services delivered by private religious or homeschools, etc., with no public representation. There can be no accountability to the taxpayers under a system so alien to the United States’ form of representative government.
How clean, neat and tidy. Wholesale destruction of an entire, wonderful system of government without firing a shot.  As a U.S. Department of Education liaison with The White House during the early days of this initiative this writer inquired of one of President Reagan’s political appointees whether this initiative, was not corporate fascism; a politically incorrect question that resulted in someone else replacing me as Liaison with The White House.

(2) Click on following link to  Unlimited Hangout, Whitney Webb’s website,  for Klyczek’s  reference to my leaking, in 1982, of Project B.E.S.T. (Basic Education Skills through Technology).   The numerous links Jake  included are SO important; some of them have my scribbling on pages…my blood pressure was rising as I read this dangerous grant in 1982.  No one will bother to click on the links, but I am sure you will…all the internal associated documents I had access to are included as enclosures to Jake’s article.

Why this is important: Iserbyt leaked in 1981, was actually the USA’s domestic version of an international technology initiative spearheaded by the United Nations Educational Scientific and Cultural Organization (UNESCO)