My fellow Anti Fed Ed Warriors, it’s been a few days since I’ve been able to write. Research has had me busy!

Have you heard of the Bill titled “The EARN IT Act”? The main sponsor is Sen. Lindsey Graham from SC. However, on this particular Bill, he has several co-sponsors. This Act is supposed to set up a protective data system for children, especially when it comes to sexual abuse and the sexual exploitation of children.

S 3398 sets up a comprehensive data tracking system. Warriors, if you spell out the EARN IT, you’ll better understand why researching this is so important.

Before we move on, here are a few questions…

1) Why “EARN”? Who’s earning what? Are the criminals or offenders D.C. wishes to target with S 3398 going to ‘earn’ their punishment?

2) Could it be the ‘EARN’ stands for all the profits the technology companies setting up and handling this new national system will gain?

3) Why now? Is it a desperate voter attention move? Sen. Graham and the bipartisan co-sponsors have sponsored or co-sponsored many other Bills which turn education into workforce prep! Now, ‘suddenly’ they all give a fig about children’s safety?! (*Note: Sen. Graham skipped voting on the ESSA (Every Student Succeeds Act), back in 2015. Of the 10 co-sponsors, 4 weren’t in office in 2015, the others ALL voted in favor of ESSA.)

The BIGGEST question we should have about S 3398 is: Will it address the Comprehensive Sexuality Education overloads we are seeing in education?! 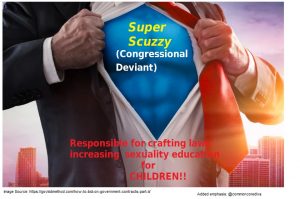 Warriors, here’s the link to the Bill, itself.

* Expanded government is included via a new National Committee on Child Sexual Explotation Prevention. As usual, the Committee will be appointed by Congress.

* Interactive computer services are defined by a 1934 law called the Communications Act. This sounds a bit odd, doesn’t it? Did we have computers and internet in the 1930s? No, but this particular Act has been amended several times, including the 1990s version (The Communication Decency Act) where the Internet operates under to this day. Look below to see the write up the most recent Communication Act has ‘protected’:

Warriors, you may be interested in the ‘infograph’ for the Communication Decency Act. You can access that here. Then, consider how on-line education isn’t really discussed at all. Could it be the school-related CSE exposure could fall under the ‘timed exposure’ to fly under the radar?

* Besides an appointed Commission, each member will serve 5 years. The power the Commission will have is reserved for hearings, testimonies, and evidence gathering. The evidence INCLUDES data from ANY federal agency or program that the Commission deems vital. The Commission will then use ‘best practices’ to implement the prevention, reduction, or, response to online sexual exploitation of children, WHICH includes: enticement, grooming, trafficking, or, proliferation of sexually abusive materials.

* EARN IT will update and modernize the cyber tip line currently in use to report sexually abusive citizens. (See page 62 for the name change.)

* Of the ‘best practices’ to be implemented, the Commission decides what’s abusive. Whichever technological service (and there’s room for many) is charged with overseeing the national activities, the Commission will decide which to choose based on their size, the type of products/services the technology company(ies) provide to monitor and block sexually abusive materials, the company(ies) business plan, and, will these products/services be available to the public. The tech company(ies) chosen will be primarily responsible for the data storage and transfer of all data from ALL data/internet endpoints!

So, Warriors, will these chosen companies really find the kinks in the system currently allowing abusive CSE programs/services and school resources? Will the CSE somehow be the exception because it’s flying under the guise of ‘education’?!

If you think that in-school CSE is not sexually suggestive or enticing, I urge you to watch this 8-minute video by the National Center on Sexual Explotation. It shows graphic examples of CURRENT elementary, middle school, and community-based educational related services where this content is not only accessible but encouraged to view. (*Note, if you look at the screen behind the lady speaking, notice the statement about HOW the explicit materials are getting into schools: internet system which bypass the school’s internet!!)

If you’ve not heard about the book, “Red: A Crayon’s Story”, it’s being used for the early ages in gender confusion. From the HRC (Human Rights Campaign), this lesson plan (similar to the image below) for little learners.

TRENDING:  Liberals Are Freaking Out About The Nomination Of Brett Kavanaugh, But It Is Conservatives That Should Be Concerned

This lesson plan on Red, is from Scotland’s LGBTQ+ community.

Warriors, in researching for this article, I found a young man from PA, KC Miller, who’s become a media darling for CSE. You should listen to his 12 minute TEDx Talk. The image below is from that talk.

Mr. Health Ed’s website has a list of activist type groups from across the US promoting the CSE agenda.

From CA, the PPP (Positive Prevention PLUS) Comprehensive Sexuality Education’s guide for special needs students has some alarming parameters. On page 6, teachers are encouraged to get as creative as possible in explaining and detailing sexual skills. You can also learn that parents may OPT children out of this program ONLY if they agree to continue to teach their children with the PPP resources.

The PPP also has an ‘independent CSE study course’, totally on-line. Videos for this can be found on Vimeo. (*Note: the Independent study is only for high schoolers, but the videos are for elementary through high school. These studies are available to anyone who subscribes, so it’s not only our public schools we need to be concerned about.)

Which brings me to another point about S 3398:

Congress has CSE bills which INCREASE the amount of sexuality enticements! In fact, it’s where the ‘superman’ image I used near the beginning came from. So, which is it?

We either STOP the increase of CSE by NOT passing either of the Real Education for Healthy Youth Acts (one from the House/one from the Senate) OR we use S 3398 to STOP using federal funds to have explotive materials in schools.

TRENDING:  Federal Education's "Kindness" Comes At A Cost To You & Your Children

If we do both, something’s very wrong with Congress. You shouldn’t pass a bill to punish child sex abusive behavior and totally bypass education! Of the sponsor/co-sponsors for S 3398, only one is behind BOTH sides of this issue, Sen. Blumenthal.

Warriors, Sen. Graham missed the vote on ESSA, but he’s far from innocent when it comes to technology. Much of S 3398 depends on MASSIVE amounts of technology. Much of the CSE depends on SEL (social emotional learning). Part of SEL in schools is prescription drug based. Did you know that Sen. Graham (among others in Congress) has benefitted from campaign contributions from Big Pharma? Did you know that Mylan NV has been a previous donor? (Mylan NV is undergoing a massive merger in the global health care/pharmaceutical field.)

Sen. Graham’s also willing to open the State of SC up to Elon Musk (a technocratic agenda-driven wealthy business owner) in the name of jobs for the economy’s sake while making friends with China in the name of COVID-19 ‘safety’.  This is according to Channel 19’s (WLTX) news.

Open Secrets shows that Sen. Graham has many business-related industries that would stand to benefit IF S3398 is made into law. One thing stands out, Warriors, in the battle for who gets to help your children navigate the ‘birds and the bees’, it looks like it will be either Big Biz or Congress. Family values, once again, are being sacrified. 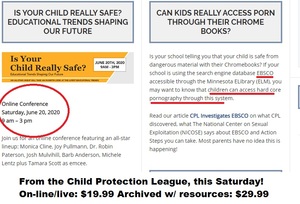 Join the Child Protection League, Saturday, June 20, 2020 for an on-line presentation about CSE and SEL (Social Emotional Learning). Included (hopefully) will be the EBSCO hardcore pornography in schools.

Warriors, lastly, did you know that Erin’s Law requires all public schools to teach about preventing children’s sexual abuse? It’s been passed in over half the States. This will also play into S 3398. But how? Will it be hard on this type of criminal activity, yet excuse the in our faces indoctrination and desensitizing of our children in schools and communities?