Anti Fed Ed Warriors, maybe you’ve seen the recent images of HR 6666 floating about on social media. Maybe you’ve seen it called the TRACE Act. Maybe, you’ve even read some articles about it. However, have you noticed the aspect of schools being involved on several levels?

Below is an image you’ve seen me use before.

This was an image long-time watchdog, Anita Hoge has used to illustrate the WASPs (Wrap Around Service Programs) that the CCSS Machine has slowly, but surely attached to our public schools. ESSA (Every Student Succeeds Act) heavily increased services AND funding for them. Especially via Title One funds and IDEA funds.

Because the ESSA embedded post-secondary readiness, that automatically pulls in BOTH the WIOA (Workforce Innovation and Opportunity Act) and HEA (Higher Education Act). In other words, cradle to grave alignment. 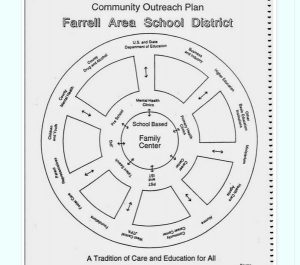 Warriors, the full name of HR 6666 is “Testing, Reaching, and, Contacting Everyone Act“.

In the image below, it’s one I created to illustrate ESSA’s hamster wheel for communities. TRACE will use this hamster wheel concept to address COVID-19 in your town. Because the cradle to grave alignment in education exists, the extension of the concept of tracking and tracing everyone just got a ‘green light’ from HR 6666’s purpose! 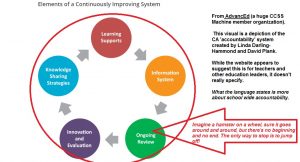 Warriors, Rep. Rush (IL) is the sponsor of HR 6666. His price tag of $100 billion is for ONE fiscal year! If COVID-19 procedures and protocol last beyond FY2020, the ‘price tag’ will increase as needs become obvious! Of course, we know who foots the price tag…it’s We the People! DC is writing checks out of OUR ‘bank account’ and not stopping to realize we CAN’T AFFORD this! 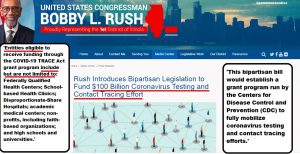 From the Press Release on Rep. Rush’s website, you can see that not only will schools be used as testing sites, but college/university based hospitals and health care centers, too. However, since ESSA turned all public schools into quasi hospitals, they qualify as federally certified health care centers. Does this mean HR 6666’s grants will allow schools to ‘double dip’? First as a federally certified health care center AND as a brick and mortar school? Could this also mean that via the WASPs, communities could also be able to ‘double dip’ into the $100 billion, too?
The image below illustrates how the SEL (social emotional learning) embedded in ESSA allowed schools to become those ‘quasi hospitals’. Could it be that schools as command centers, testing for COVID-19; the CCSS Machine will attach those SEL diagnoses, too? It makes sense when you consider that entire families will be tested under the parameters of HR 6666. 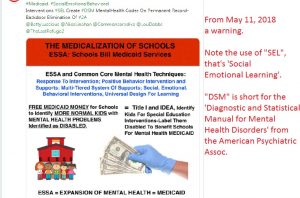 Warriors, currently, there are 45 co-sponsors (39 are original). Of those 45, only one is a Republican, so when you read those media accounts of ‘this is what the Democrats want’, that’s not entirely accurate. This list of co-sponsors is expected to increase, by the way, and, as we know the CCSS Machine is full of BOTH major political parties. 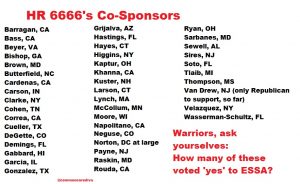 Warriors, I’m sure you have all kinds of questions. I know I do! Here are a couple.

Why is a bill putting the Sec. of Health and Human Services, in a committee for Energy and Commerce?

Shouldn’t it be in a health-related committee? After all, technically speaking, HR 6666’s policy area is Healthcare!

Then, the question of unconstitutionally written language in HR 6666. According to Congress, it’s considered to be 100% Constitution bound under Article 1 Section 8. 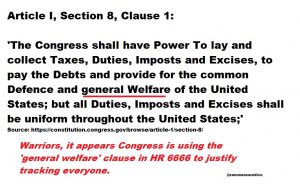 I really am not buying that HR 6666 IS 100% Constitutional. WHY? Nationally tracking every citizen IS unconstitutional! Setting us up as data points (see Rep. Rush’s image in his press release) is UNCONSTITUTIONAL.

Having schools classified as federally certified health care centers is UNCONSTITUTIONAL! (*Note: if you want to see the money trail of Rep. Rush and why he is sponsoring this bill, go here. I can tell you Big Unions, Big Healthcare, and, Big Medicine help fund him. Rep. Rush also happily voted for and still supports ESSA.)

In the name of ‘general welfare’ and ‘safety’, the CCSS Machine (including Congress) are bastardizing our laws and our freedoms. COVID-19 (as many have shared) is simply the current weapon of choice. Yes, many have died; many have been sickened, but to assume the best way to solve a problem is to cast everyone into the same pot?! That’s poor thinking. 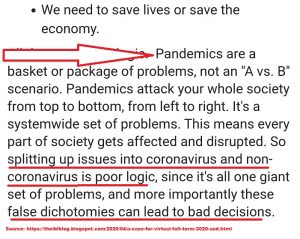 If you’d like to read the rest of the article this above image is seen in, go here.

Evidence Of Tracing Is Surfacing WITHOUT HR 6666 As Law:

From CA, as seen on social media, this image declares every family member receiving State financial aid MUST be tested for COVID-19 or benefits will be suspended. Many of these families go to schools or use school based services.

From fellow Warrior, Alison, a warning about the big data grab COVID-19 testing is setting up:

Her blog has much information to help you connect how dangerous this is. Her visual maps are especially worth noting. If you think we are being told the truth about how innocent and helpful massive data collection can be, know this: by seeing data as the biggest economic changer, it makes sense that HR 6666 is in a committee where commerce is the focus. Below, is a visual I created concerning the House’s Energy and Commerce Committee and education overreaches.

HR 6666 is setting up the very thing Alison’s been researching and publishing. She has even tied Fauci to Gates. As we know, Gates is also behind the CCSS Machine. 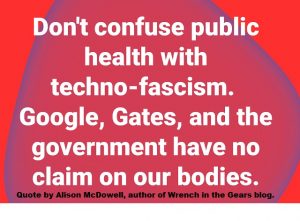 From MA, Dept. of Family and Children Services need foster families due to the increase in children coming into the system over COVID-19.

From the news report above this excerpt about the President of DFCS (Zwick) says many of the state’s COVID positive kids are being removed for abuse or neglect, but in some cases, it’s because the parent did not have a COVID-19 plan. “We had a situation where a child was removed and placed into care because there was no alternative plan identified,” says Zwick. “Their caretaker became ill and had to go to the hospital and that child didn’t have any place to go.

From WA (State), families and children separated over COVID-19.

From the WHO (World Health Organization) back in March 2020. Executive Director, Dr. Ryan can be heard on this YouTube video stating that nations must get aggressive, especially the governments. (Listen beginning at 13:08 and ending at 14:12)

Also from Dr. Ryan, more aggression and surveillance measures must be taken, at least until a vaccine. The YouTube video where you’ll hear this is less than 4 minutes. Warriors, it’s almost a talking version of HR 6666.

Blockchains And U.S. Dept. of Education:

Warriors, you know I’ve shown you how the Dept. of Education has used COVID-19 to overreach into families.

But did you know the Dept. has a blockchain sub-department? It uses the technical side of everything (data) to help carry out regular data mining, but is stepping things up, especially with all the digital at-home learning in all ages and types of institutions connected to education. Did you know that U. S. Dept. of Ed is partners with New America?

wrote about New America back when Duncan was Sec. of Education. New America as a special initiative called BTA (Blockchain Trust Accelerator). 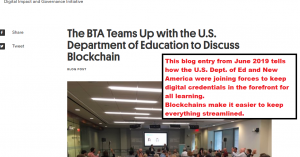 New America, through the BTA is joining forces with the UN (United Nations) as well. As I’ve shown you before all education and workforce data end up in the UN’s files.

The U.S. Ed’s Blockchain employees will be at a  Conference in June 2020 (live or on-line). It’s actually the ISTE Conference. ISTE is short for International Society for Technology in Education. Which is why they are so dependent on STEM (Science, Technology, Engineering, and, Math) of the UN’s making. Here is the link to my ISTE article from 2015.

Somewhat related to ISTE is the fact Sec. DeVos signed a G20 Education agreement. Part of the plan? Increasing AI (Artificial Intelligence) in education. To carry AI off, you have to use SEL to manipulate minds. COVID-19 education is doing just that. It’s almost certain all HR 6666 involves will circle back to social emotional abuse, too.

Warriors, there are 2 petitions against HR 6666 from Change.org, however, I’ve never seen any petition from this group surface anywhere beyond my email box’s confirmation and updates on things I’m not interested in. The White House does have a petition portal which can influence the Executive branch IF the topic is relevant AND reaches enough signatures. However, as seriously toxic to our freedom/rights as HR 6666 is, I think we need stronger action than petitions. We need letters to editors, we need calls and emails to those 45 co-sponsors. We need visits to the sponsor in IL, and, turning our outrage into actions. The $100 billion ‘test’ using education as the change agent is not to set us free, it’s to set us up. It’s turning citizen against citizen in the name of testing. THAT’S IMMORAL. 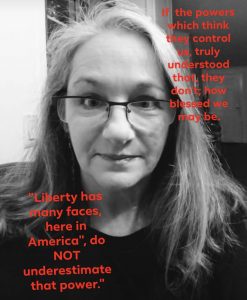 From 2002 to today, Lynne has been a featured speaker at small meetings and large conferences. Since 2009, she has served as a frequent guest on nationwide radio and multimedia shows. Lynne also co-established PIE NC (Preserving Integrity and Excellence in Education). She is a retired private (homeschool) teacher and regionally recognized support group leader. She has also been a business owner, worked with children's ministry and currently is an education liaison for Protecting Innocence Campaign (based in OH), wife and mom. Lynne is also an adviser to the national grassroots campaign "Child Abuse in the Classroom", where it is the campaign's belief that "Repealing ESSA and Restoring FERPA" are the best ways to help restore our nation's education system. She was also awarded the 2011 Distinguished Educator from the National Society of High School Scholars, as well as the 2016 L&B Network's Torchbearer Award for educational advocacy. She has been recognized by her peers as an expert in Common Core, Career Tech Education, Career Pathways, workforce and competency-based education reform, federal overreaches into education and our families.
View all posts
Spread the love

Who Are Nancy Pelosi & Chuck Schumer?