I have never, in my life, witnessed so many people dying and the reason for their death has not been immediately known. Week after week, I open up multiple news sources to find all sorts of “celebrities” who have died, many of whom are quite young. This is not normal, but in COVID world, it’s par for the course. The latest interest that has intrigued me is the death of Rep. Sean Casten’s daughter, Gwen. Not a single Mockingbird media outlet and the majority of alternative media have not even pointed out that Gwen took the COVID shots, which I believe resulted in her untimely death. In fact, neither the media nor Casten have even mentioned whether she did or did not take the shot, which is a grave disservice to the public, but that’s what you get when it’s “brought to you by Pfizer,” right? However, all of the evidence we have indicates that she did, in fact, take it.

First, take a look at the letter Rep. Casten and his family issued regarding Gwen’s death. Note that she was an activist for all sorts of subversives in the US. 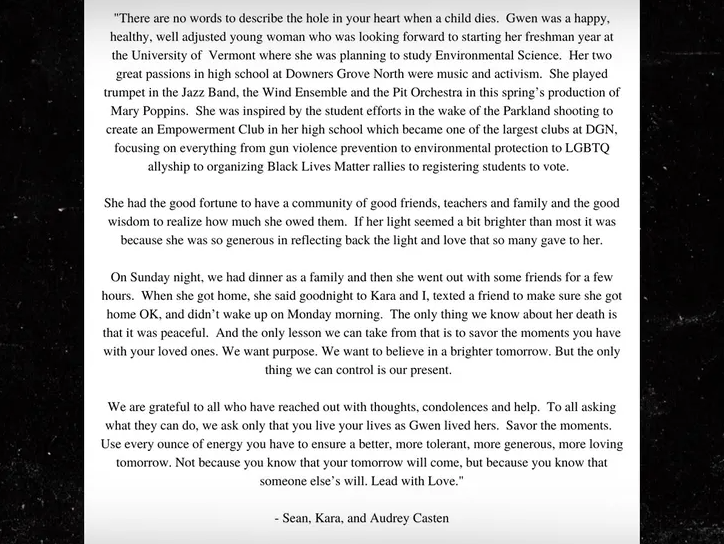 While I sympathize with the family over the loss of Gwen, I cannot sympathize with Rep. Casten when he will not state to the public that she took or did not take the COVID shot and how he advocated for it to others. The blood of many are on his hands, as far as I’m concerned, because of him failing to reveal this to the public. And I can guess why he hasn’t done it.

Sadly, Casten led his daughter in the wrong direction. Just weeks before her untimely death, Gwen recorded the following campaign spot for her father, pushing the very things that the Judge of all the earth condemns.

A post shared by Sean Casten for Congress (@teamcasten)

As for Rep. Casten, he pushed for people to take the deadly, unsafe and ineffective shot, even forcing it onto his staffers and calling those who wouldn’t take the shot “knuckleheads” (Yep, that’s my word).

Not hiring knuckleheads is my superpower.

“I’ve made a point of not hiring knuckleheads, and everybody on our staff got vaccinated…”

[Casten’s] staffers were all eager to get vaccinated “because they don’t like to be dead.” https://t.co/4d75VmnFUi

He also pushed the same non-science nonsense about masks and even talked about those in authority not caring for your life is they say anything to the contrary while at the same time advocating for the murder of the unborn, just like he taught his daughter to do. Hypocrite!

If you can’t get vaccinated, wear a mask.

If ANYONE in a position of power says anything to the contrary, they do not value your life. https://t.co/nPyPQ4xUvs

You may say, “Well, that’s all fine and dandy, but where’s the proof Gwen took the shot?” Good question.

Her mother took the shot and posted a picture to confirm it. 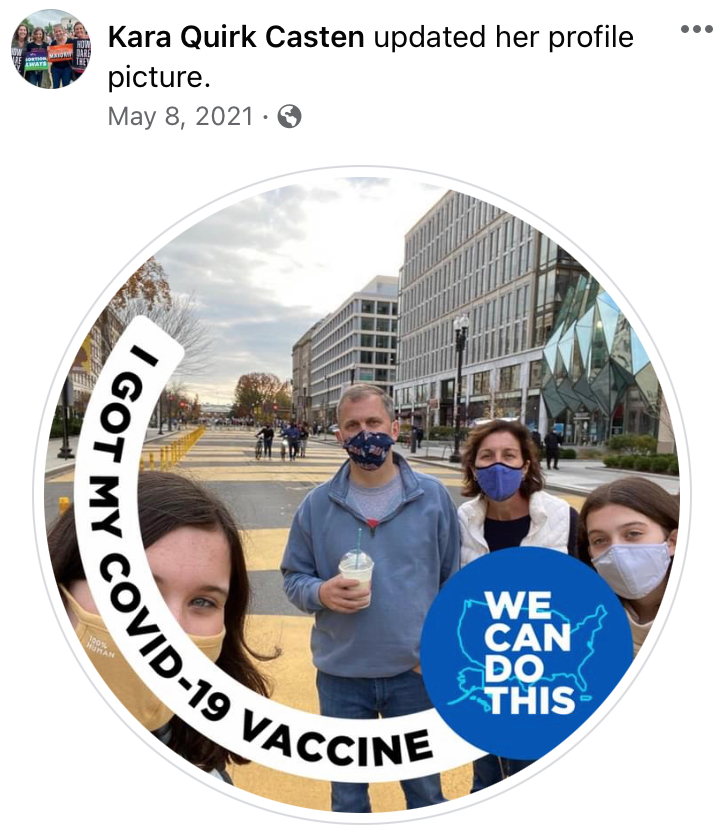 Rep. Casten also issued a statement alleging that he had taken the shot in December 2020.

“As a nation, we are fortunate to have a vaccine that is safe and proven. We are also fortunate to have a public health system that has developed a robust protocol for national vaccine and I’m particularly thankful the first round of vaccines continue to be distributed to our frontline health care workers who have worked tirelessly to combat this virus.

“Last week I received the first dose of the Pfizer COVID-19 vaccine on the advice of public health officials who determined that both as a public health matter and to ensure continuity of government, all members of the House and Senate should be vaccinated in this first phase.

“I am pleased to be able to help slow, and ultimately stop the spread of this disease. And in the meantime, we all must continue to maintain social distancing and masking wearing protocols.

“Whether you are a frontline worker, a young high school student, a remote IT employee, or a senior in a nursing home, I urge you to make sure that you get vaccinated as soon as you are eligible.

“The light is now visible at the end of the tunnel, but we must remain vigilant until we are all the way through. We can beat this, but only if we work together.”

Is anyone with a working brain going to tell me that Casten pushed this on his staff, called those who don’t take the shot and wear a face muzzle with zero scientific evidence it is good for you, teaches his daughter to walk in his footsteps to promote the murder of the unborn and the perversion of the sodomite community, get the shot himself and his wife and his kids aren’t taking the shot? Do you really believe that?

While I called multiple offices of Casten, including his state and DC offices, not a single one had a person answer the phone. I requested an affirmation or denial that Gwen had taken the shot. I also expressed my sympathy for the family of her loss. As of the writing of this article, they have failed to respond, but there is not a doubt in my mind that “like father, like daughter” is in play in this very sad story.