We’ve known about the Central Intelligence Agency’s involvement in the drug trade coming into America for decades.  It’s been reported on and documented during that time, but often, people simply don’t believe it’s true or they look at you like you have a tin foil hat on, or they allow the CIA to call you a conspiracy theorist, a term they basically coined to try and shut you down from telling the truth.  Yet, long before Jeffrey Epstein set up shop in the Caribbean, the CIA was there along with some friends.

Our friend Corey Lynn of CoreysDigs.com has begun to provide some researchers’ findings on a variety of information.

In a recent piece, “The Sharp Edge,” as she is known, documented “the hidden history of CIA black ops in the Caribbean – from No Name Key to Norman’s Cay to Disney’s Castaway Cay and beyond” in a piece titled “Kingpins of the Carribean.”

Here’s what she uncovered:

Operation 40, a CIA sponsored hit squad in the 1960s, was a “mixed group of Cuban exiles, Italian wise guys, and square-jawed military intelligence types.” Created under Eisenhower in March 1960, controlled under VP Nixon, and funded by George HW Bush, this secretive team has been implicated in the assassination of JFK, CIA drug trafficking, Watergate and even the 9/11 cover up. Taken in a Mexico City nightclub in 1963, this is the only known picture of the original members of Operation 40.

The man hiding behind his lapel is Frank Sturgis. Before he became known as the Watergate burglar, Sturgis was a CIA operative for Operation 40. He moved to Cuba in 1956 and in 1958 offered to train Castro’s troops, including Che Guevara, in guerrilla warfare, to overthrow Batista. Castro accepted the offer, but had an immediate need for guns and ammunition. So Sturgis became a gunrunner for Castro, with the help of Jack Ruby, and funding from the CIA.

When Castro seized power, Sturgis was part of a rebel firing squad that executed 71 of their opponents. Sturgis was photographed holding a rifle on top of the mass grave afterwards.

Sturgis became involved with Marita Lorenz, who was having an affair with Fidel Castro. In January 1960, Sturgis and Lorenz took part in a failed CIA honeypot scheme, in an attempt to poison Castro.

Sturgis escaped Cuba in 1960, spending the next 3 years as a parliamentary commander at No Name Key, training Cuban exiles for the Bay of Pigs attempt to overthrow Castro, which ultimately failed.

After the Bay of Pigs mission to overthrow Castro failed, in October 1962, the US and Soviet Union engaged in a tense 13-day standoff over nuclear-armed Soviet missiles in Cuba. Facing pressure from all sides, Kennedy averted nuclear war, which displeased the Deep State military industrial complex.

It was after this pivotal moment in history that Kennedy realized the grave dangers that the CIA and military industrial complex posed and vowed to “splinter the CIA into a thousand pieces and scatter it into the winds.”

However, that wasn’t all, this same Operation 40, that was put together in order to take out Fidel Castro, was then targeted on President Kennedy.

“It seems that members of Operation 40, originally recruited to remove Fidel Castro, had been redirected to kill Kennedy – that someone had paid this team of assassins to kill the president of the United States as part of a freelance operation. This is not such a far-fetched idea when you consider that in 1959 Richard Nixon was approaching oilmen like George Walker Bush and Jack Crichton to help fund Operation 40.”

According to undercover CIA operative, Marita Lorenz, she met Frank Sturgis again with Oswald, 2 Cuban exile leaders, and 2 Cubans in the days prior to JFK’s assassination. Lorenz claims they were all members of Operation 40 assassination squad and Oswald had visited the Operation 40 training camp in the Florida Everglades – No Name Key.

Frank Sturgis himself admitted that “this assassination group (Operation 40) would upon orders, naturally, assassinate either members of the military or the political parties of the foreign country that you were going to infiltrate, and if necessary some of your own members who were suspected of being foreign agents.”

Years later, on June 17, 1972, Sturgis and others were arrested while installing electronic listening devices in the national Democratic Party campaign offices located at the Watergate office complex in Washington. The phone number of E. Howard Hunt was found in address books of the burglars, which enabled reporters to link the break-in to the White House. Frank Sturgis claimed to his dying day that he acted under orders from the White House.

Notice all the big names that were named, and many of these names have turned up in various theories on who and how Kennedy was killed in contrast to the official narrative put out in the Warren Report.

Of course, most famous was the confession of E. Howard Hunt on his death bed, where he claims to be “a benchwarmer” in “the Big Event,” his preferred euphemism for JFK’s assassination.

There was deadly animus against the president among the Miami CIA men in 1963. 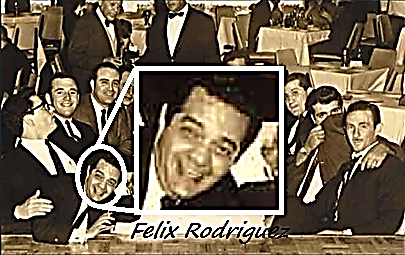 As a member of Operation 40, Felix Rodriguez is a former CIA Paramilitary Operations Officer, known for his involvement in the Bay of Pigs Invasion. As part of the CIA backed brigade 2506, Rodriguez snuck into Cuba in the weeks prior to the Bay of Pigs to assassinate Castro. The mission failed.

Felix Rodriguez headed a mission to catch Che Guevara. When Guevara was captured, it was Rodriguez who performed the interrogation before ordering his execution. It is said that Rodriguez possesses Guevara’s Rolex watch to this day, as a trophy.

“As CIA director in the mid-1970s and as Ronald Reagan’s vice president, Bush helped forge a world of strongmen, wars, cartels, and refugees that continues today. In particular, he was deeply involved in the events that became known as the Iran-Contra scandal, a series of illegal operations that began with a secret effort to arm Contra fighters in Nicaragua in the hopes of toppling the leftist Sandinista government; this effort became connected to drug trafficking, trading weapons for hostages with Iran, and banking scandals.” “Rodriguez ran the Contra supply depot in El Salvador, and served as the bagman in the CIA’s deal with Medellin.”

Then, there was Porter Gross. 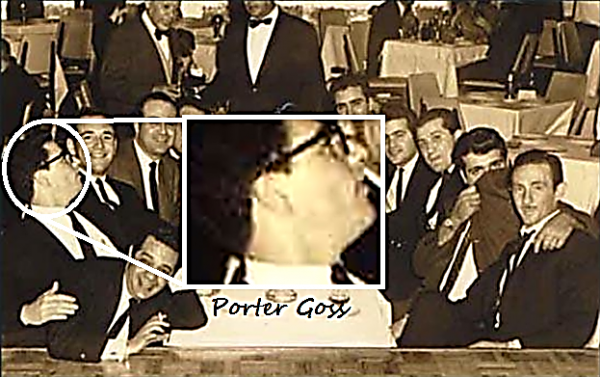 While a member of the Yale secret society, Book and Snake, his junior year Goss was tapped to join the CIA. His years as an agent from 1960 – 1971 remain much of a mystery, but he has confirmed that he worked in Latin America and the Caribbean, including Haiti.  Goss has stated that he was involved in the Cuban Missile Crisis and had “some very interesting moments in the Florida Straits” (the body of water between No Name Cay and Cuba). When asked about his membership in Operation 40, Goss categorically denied it, stating he “never heard of Operation 40.”

Goss served as a Republican member of the House from 1989 – 2004, and then became the last Director of Central Intelligence and the first Director of the CIA, following the PATRIOT Act, which he co-sponsored. Porter Goss was also a co-chair of the Joint 9/11 Intelligence Inquiry.

Porter Goss and Bob Graham, who led the joint Congressional hearings on the 9/11 attacks, both were having breakfast on the morning of September 11th, 2001 with a man who reportedly wired $100,000 to Mohamed Atta, the head of the Pakistani Intelligence Service.

“Chairman Porter Goss said an existing congressional inquiry has so far found ‘no smoking gun’ that would warrant another inquiry” into the 9/11 attacks. This statement points to an obvious “cover-up”. The smoking gun was right there sitting in the plush surroundings of the Congressional breakfast venue on Capitol on the morning of September 11.”

And there was Barry Seal. 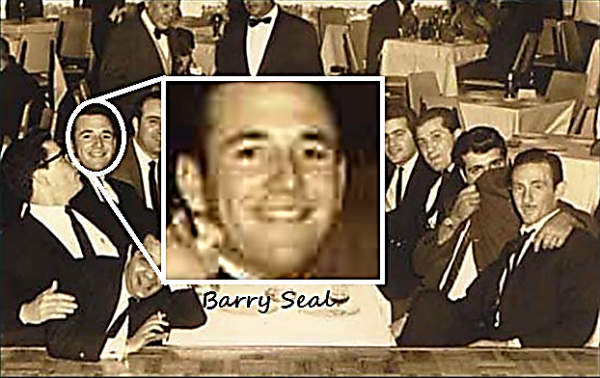 As an incredibly skilled pilot Barry Seal began his career in the CIA in 1958 gunrunning for Castro, to assist in the overthrow of Batista. At the time, the CIA supported the overthrow of Batista, but soon after Castro gained power, the CIA ordered operations to overthrow Castro. Barry took part in air attacks on the new Castro government. Barry took part in training Cuban exiles, with Frank Sturgis, on No Name Key.

Barry Seal is alleged to have been the pilot that flew the getaway plane out of Dallas after the JFK assassination. Barry claimed to work for David Ferrie, “who he said was CIA.”

Barry Seal helped Carlos Lehder, Pablo Escobar, and the Medellin cartel revolutionize drug trafficking to the US. Prior to the use of skilled pilots like Barry, they smuggled only small amounts of cocaine through drug mules. With Barry Seal’s flying expertise, the cartel was able to smuggle tons of cocaine into the country. By his own admission, Seal became the Medellin cartel’s chief link to the cocaine markets in the southeastern US.

Seal became known as the biggest drug smuggler in US history. The cartel would ship tons of Cocaine to Carlos Lehder’s private island, Norman’s Cay, where it would then be flown into the US.

Barry moved his base of operations from Louisiana to Mena, Arkansas, under Governor Clinton, where his “well-connected and officially-protected smuggling operation based in Mena accounted for billions in drugs and arms”.

Carlos Lehder and Barry Seal continued operations from Norman’s Cay Island without fear from the DEA, who knew of the operation, or the Bahamian government, who gave them their blessing. In 1984, Escobar ordered the assassination of the Colombian Minister of Justice, Lara Bonilla, after which Carlos Lehder went into hidingand operations on Norman’s Cay were shut down.

The same year, Barry Seal was indicted for drug smuggling and money laundering. He then became an informant, who divulged information on the Medellin drug trafficking operations, which ultimately led to the indictment of Norman Saunders, Prime Minister of Turks & Caicos.

Before he was able to testify, Barry Seal was gunned down by members of the Medellin Cartel, which became the “official” headline news. However, with the private phone number of George HW Bush in Barry Seal’s trunkat the time of the assassination, it is alleged that Bush ordered the hit.

There’s more in the piece that ties into Disney and more information on Escobar.

In fact, you really should check out her latest report on “Exposing the ‘Keys’ to Disney’s Operations and Agenda” at CoreysDigs.com in which she states, “If the world only had the eyes to see the fibers which lay under the surface of Walt Disney’s image, they’d tar and feather him, and drag him through the streets. If only they knew what Disney’s primary goal is.”

For even more information why Kennedy wanted to splinter the CIA into a thousand pieces, check out these books.

FBI Had Foreknowledge Of El Paso Shooter's Murderous Plan - Did Nothing