The Pagan Statue That Replaced The Robert E. Lee Statue In New Orleans

This is how Christians in the US have allowed pagans to rob them of their culture, their morality, their history and soon they will be looking to rob us of our lives.  The City of New Orleans pulled cowardly removed the statue of Confederate General and true patriot Robert E. Lee.  They replaced it with a pagan statue made by Simone Leigh which depicts a woman like figure with a snake wrapped around her.

The Egalité Circle in New Orleans, formerly home to the infamous Robert E. Lee statue, is now replaced by a statue by Simone Leigh.

The statue by Simone Leigh, named Sentinel, was finished in 2021. It depicts a snake wrapped around the slender, spoon-like body of a female. The entire statue is made of bronze, which is the characteristic of Leigh’s art. It was unveiled last week at the Egalité Circle, formerly known as Lee Circle. It was placed there as a part of the Prospect New Orleans triennial, which was celebrating its fifth edition and ended last weekend.

The statue is only placed there temporarily, until July 22, after which the space will become available for other artists. Simone Leigh has drawn inspiration from various African cultures, many of which could be found in New Orleans. For instance, the slender female body resembled the water deity Mami Wata, while the spoon is a symbol from the Zulu culture.

The statue of Confederate general Robert E. Lee was removed from the space in 2017, with the circle getting subsequently renamed too. Leigh’s statue is the next step in challenging the powers that have long championed the Confederate ideals of racism and supremacy.

In a statement, Naima J.  Keith and Diana Nawi (artistic directors of 2021 triennial) wrote: “Ultimately, Simone felt, and we agreed, that because the original placement of the Robert E. Lee atop the pedestal was one of power and domination—the statue loomed over the city, symbolizing the tyranny of white supremacy—that her work should be closer to the level of the individual.”

Meanwhile, Simone Leigh is preparing for representing the USA at the Venice Biennale.

Here’s a photo of the new statue. 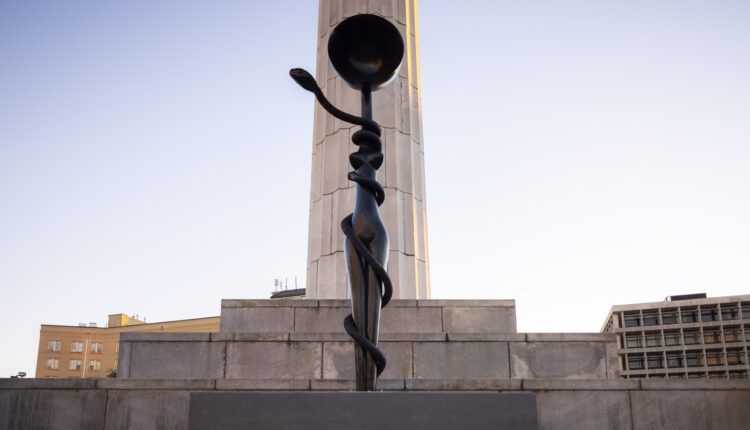 The Pagan Statue That Replaced The Robert E. Lee Statue In New Orleans