Author’s note: (So what’s ‘perestrokia’? It’s a Russian word for a total restructure of your government and/or economy.) Today’s article starts and ends in America, but has quite a bit more in common with the Former Soviet Union than you may realize.

Anti Fed Ed Warriors, as we’ve seen, the CCSS Machine encompasses so much outside of education. Health care is one of the biggest areas. We also know that ESSA (Every Student Succeeds Act) gave a tremendous amount of power to the U.S. Dept. of Health/Human Services.

Why would an unconstitutional law like ESSA embed a federal department NOT in charge of education? Let’s face it Warriors, neither the U.S. Dept. of Education OR Health/Human Services are constitutional!

The answer’s very simple: The increase in power via ESSA was to overreach into mental health services in schools. As we’ve learned over the years, those services aren’t simply for public school children and their families, but entire communities! WASPs (Wrap Around Service Programs) are where you’ll find communities, especially in rural areas available to every family, regardless of their school location. 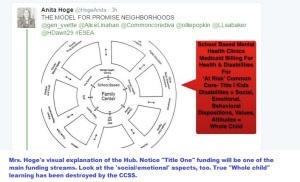 So where did I get the information for increases in HCBS? This excerpt:

Each state is eligible to receive up to $5 million in supplemental funding for planning and capacity building activities to accelerate long-term care system transformation design and implementation, and to expand HCBS capacity.”

Warriors, parts of the HCBSs will include Medicaid partnerships (P3s, public/private partnerships) for disability housing, education and career tech training, tele-health and more. However, don’t skip the fact the federal government is using a data tracking follow the money system to know our every move. Below is the image of how far and wide that data system goes with YOUR information. 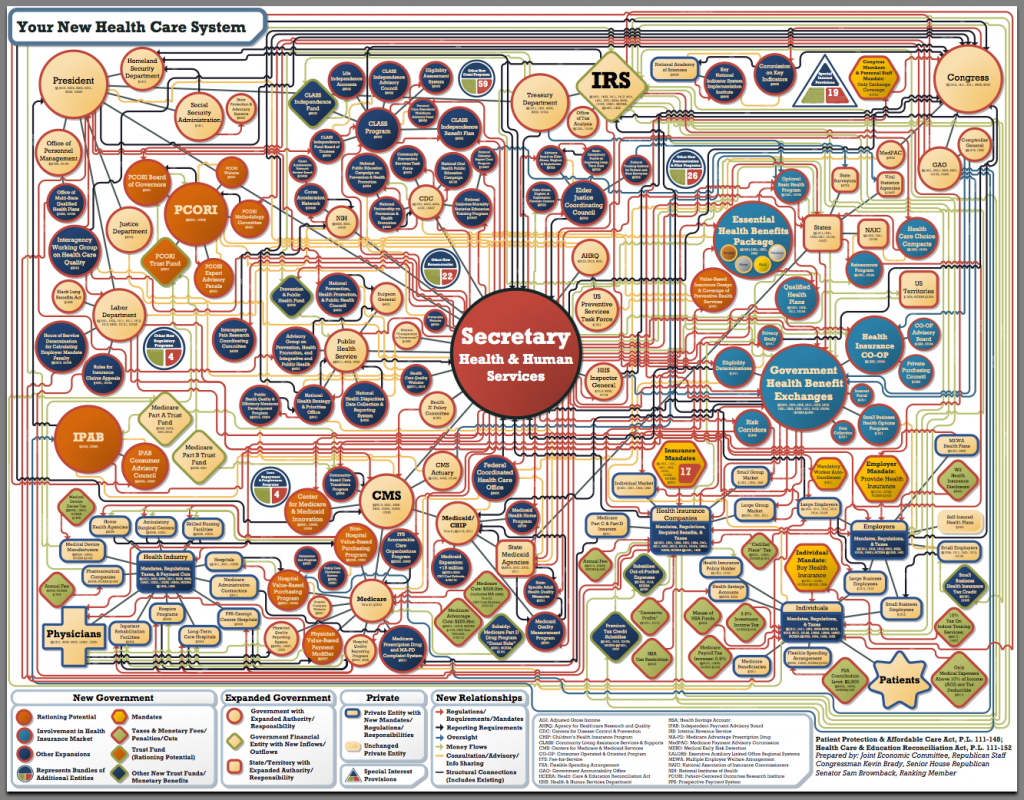 Warriors, the Medicaid Housing Partnerships will involve the U.S. Dept of Housing and Urban Development (HUD).  In a 2014 Report for this very type of nanny state run low income housing, you’ll find that the goal is to have government housing tied directly to the home/community based services. Let’s also not lose sight of the fact that the recent increase in funding is using COVID as the justification! Is HUD a CCSS Machine member? Sure! Is it tied to ESSA? Absolutely! Earlier this year, I showed you how HUD was involved in much the overreaches. HUD is also tied to the UN’s SDGs for ‘sustainable housing’. Which leads me right back to the 2014 Report. Look at the title: 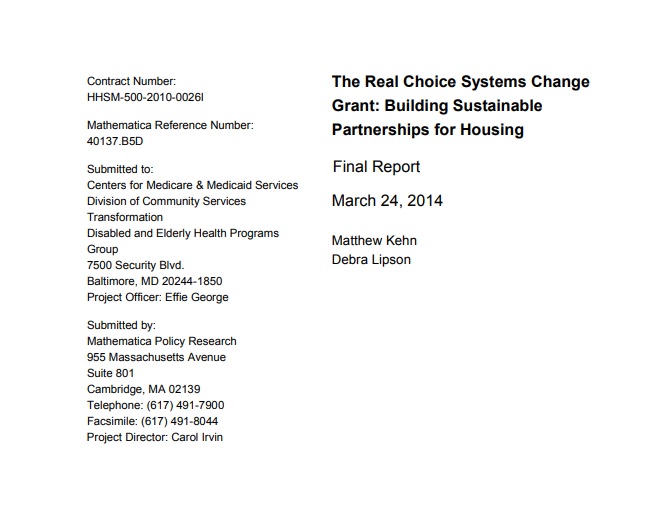 The Report is only 35 pages long, but I encourage you to read it. Look for quasi-government groups and their ability to access private funds, look for the 6 States and their successes/failures in combining housing and medical services. Look for how the government (at federal and state levels) wants to increase the housing vouchers and other subsidies for people to have affordable homes. Oh, you’ll also be surprised to learn that a Supreme Court’s decision (1999) is also included in this Report as further justification for federal government overreaches. 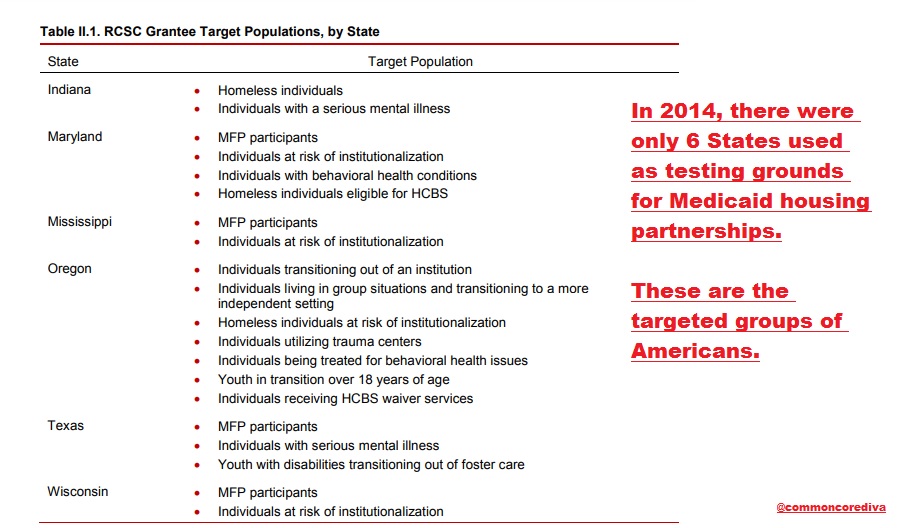 Also from 2014, is the Report on all the ‘innovations’ made to improve HCBS. Warriors, remember, the federal government’s use of ‘innovation’ is a clue into one area: data mining! From this Report, notice the targeted groups were older people and those with disabilities, including mental health. However, look at the targets from above. Children are involved! As I’ve shown you recently, COVID is a scam in education, at EVERY age level, so what will these new CMS funds do to them?!

Warriors, do you see the pattern? In this short video, you’ll hear the government’s ‘continuum of care’ mentioned. While we do need to care for those in need, it’s NOT the government’s job to be our nanny. Think about how this type of overreach has already impacted education via ‘career tracks’ for students (all ages/choices). Think about the fact the government parameters for health care are often not keeping your specific needs in mind, but rather, their ‘outcomes’. So, what is a ‘continuum of care’? Per Youth.gov, it’s a program to end homelessness from HUD.

Ask yourselves, is there another aspect to ‘the continuum of care’? Yes, there is:

Warriors, seeing all this may remind you of the line, “I’m here from the government to help.” It reminds me of socialism. Is there a continuum of sorts for THAT? I did find one by a very progressive author. 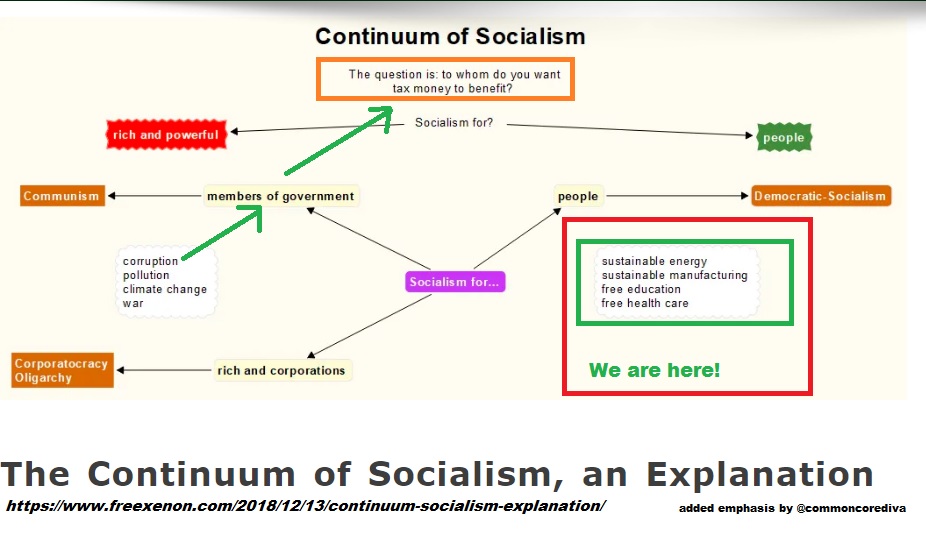 1) Since we’re socialist in so many ways already, we might want to see how we all will be ‘re-educated’ as our government becomes more tyrannical. According to this cited paper, re-education of citizens has to happen anytime a change in your political system happens. As we slide more into the one world government, we, too, adults and children, will have to learn all over again about government.

2) You might also want to read the NIH’s information on the Former Soviet Union’s health care system. Then ask yourselves, why would the U.S. Dept. of Health/Human Services (parent agency for NIH) even have this information?!

3) Mentioned in the above information was the EU’s (European Union) Copernicus system. After looking that up, it’s a huge data tracking system designed to monitor the Earth. Data collected impacts social policies and actions. Including education and health care. Copernicus has an organizational map where you can see ‘Pan European and Local Components’. Part of the ‘local’ includes education. If you look deep enough into Pan European components you’ll find the OECD (Organization for Economic Co-operation and Development). These connect to Copernicus in one specific area: Skill based education for jobs.

4) This American Journal for Physicians 1990 publication, lays out the former Soviet Union’s health care plan. Much of it centers on government collected taxes and economics. In the USA, we already have much of what’s in this document. The parts we don’t have could be coming very soon.

5) If you are concerned (as I am) about the type of Medicaid housing we’ll be getting, you may wish to see how the former Soviet Union’s massive government built housing went. The research paper is from 1984. While I’m sure the more modern USA government house building will ‘rack and stack’ many, I’m certain we can learn something from this resource. You’ll also want to read about the treatment of the elderly.

6) How NY State is using HCBSs in 2020 for education, including homeschooling.

Warriors, one thing I’ve noticed in researching the Home/Community Based Systems. They misrepresent personalized learning. As we know, PL is a trap for once again, massive data mining. Using COVID as an excuse to go after our health care in similar fashion is also gross misrepresentation. 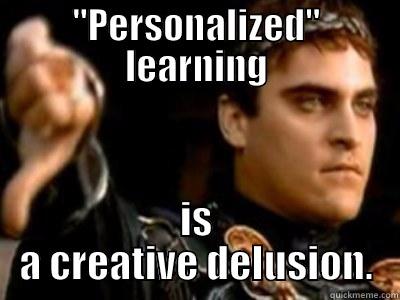