Home»US»Washington: Angry Parents Confront & Expose Another Depraved Drag Queen That Wants To Read To Your Kids
US

Another drag queen tied to the nation-wide “Drag Queen Story Hour” has been confronted and exposed by not just activists, but parents, who were unafraid to stand for the children even against pro-lesbians, sodomites and others there to counter their protests through intimidation.

A “Drag Queen Story Hour” was planned to target the young children of Des Moines, Washington.

However, when local parents found out about it, not only were they angry, they put their anger into action.  More on that in a moment.

The Des Moines Library was not only promoting this depraved man dressed as a woman as something appropriate for children, but the local elementary school was also promoting it.

Nearby Midway Elementary School came home with a flyer about the Drag Queen Story Hour. 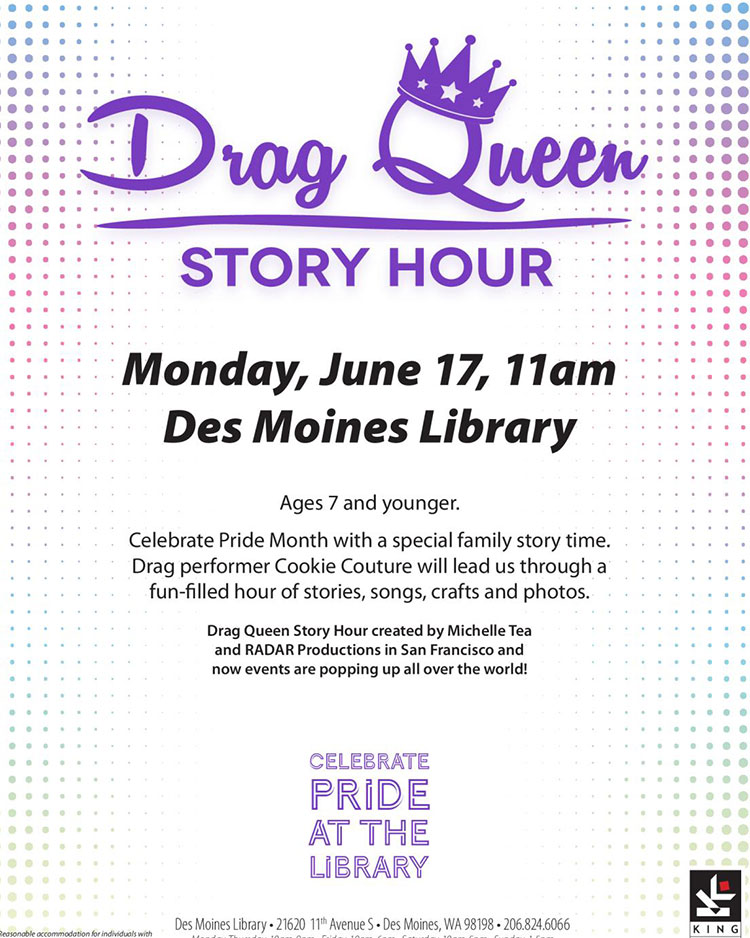 Really?  Is this something that should be promoted in a public school?  It is when you turn education over to the state.  However, Bibles and Bible reading simply cannot be tolerated by these “tolerant” people, can they?

The parents were shocked to learn that the school was promoting this debauchery and contacted the Washington State chapter of Mass Resistance.

Here’s what happened, according to Mass Resistance.

On May 29, Washington MassResistance encouraged a group of parents to attend the Library Board meeting. But the board members basically brushed aside their concerns without even discussing them.

Our Houston MassResistance team stepped in to assist our Washington State group. They began researching the “Drag Queen” – who calls himself “Cookie Couture” – who was slated to read to the children at the event. Not surprisingly, they found many repulsive and pornographic images and other material that he had posted of himself on social media. To say the least, it suggests a very disturbed and sexually deviant person.

OK, understand that the following picture is one that “Cookie Couture” posted of himself.  This is the depraved person that the Des Moines Library and Midway Elementary School believe is appropriate to not only be around children, but to be applauded and allowed to read to them. 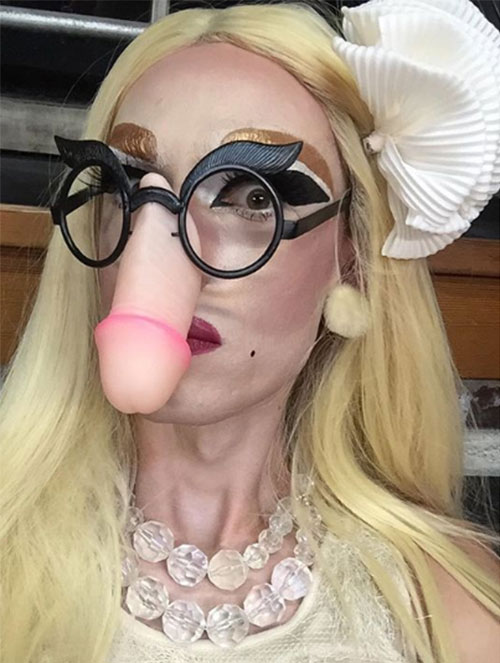 The Houston team had already done their homework on this person and put out a 19-page exposé of “Cookie Couture”.

This was provided to the parents who became all the more enraged.

Mass Resistance goes on to tell what happened next.

The MassResistance activists emailed the exposé of the Drag Queen to library staff, the Library Board, and other local officials, along with a letter demanding that the event be cancelled. The officials’ response was completely the opposite; none of the them had any problems with the event or the foul individual. They saw the X-rated world of drag queens as a perfectly legitimate topic for libraries to introduce to young children. They were even contemptuous of the parents’ outrage over it.

It hurts to say it, but this unfortunately reflects the moral compass of many people across the country who are attracted to library work, and also many local public officials, we have observed.

However, the parents were resolved to fight back.

So, on June 15th, two days before the event, the parents staged a protest outside the library to inform the public about the degeneracy the library was promoting.

And, there was opposition from those that support such depravity.

The local pro-LGBT activists found out about the protest and a group of them showed up also. They were from PFLAG, a national group targeting children that pushes homosexual and transgender programs in schools and communities across the country.

But the MassResistance parents weren’t intimidated. It was a great protest and they had a powerful message! They also demanded background checks of the “readers” to children. 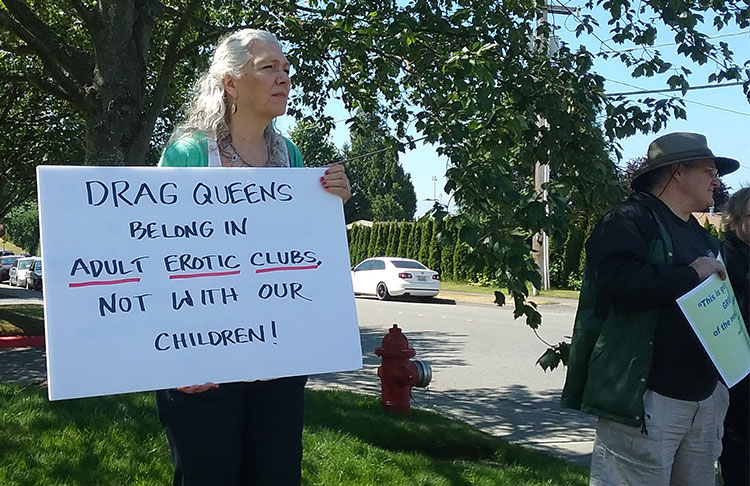 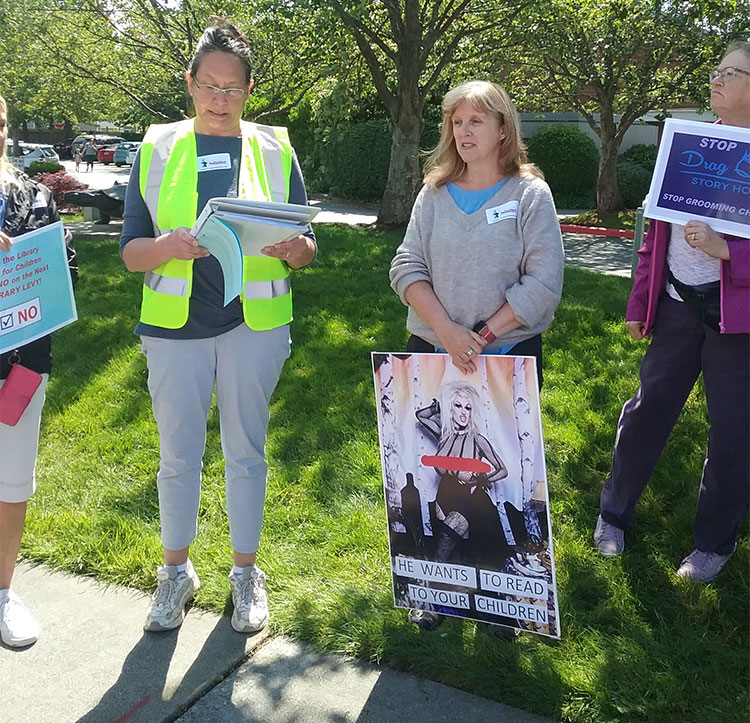 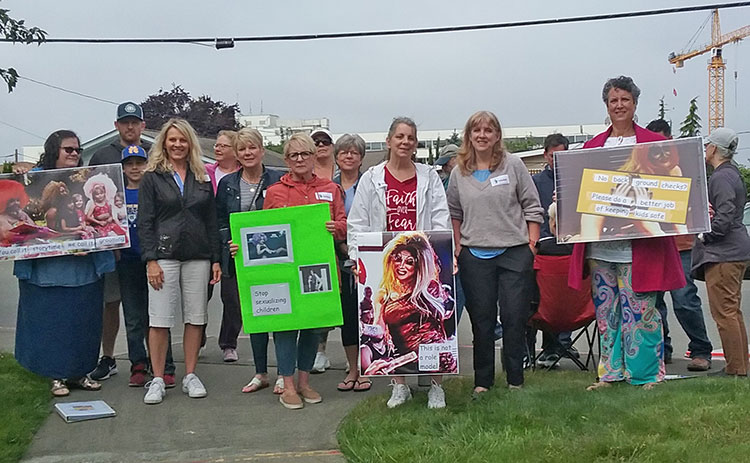 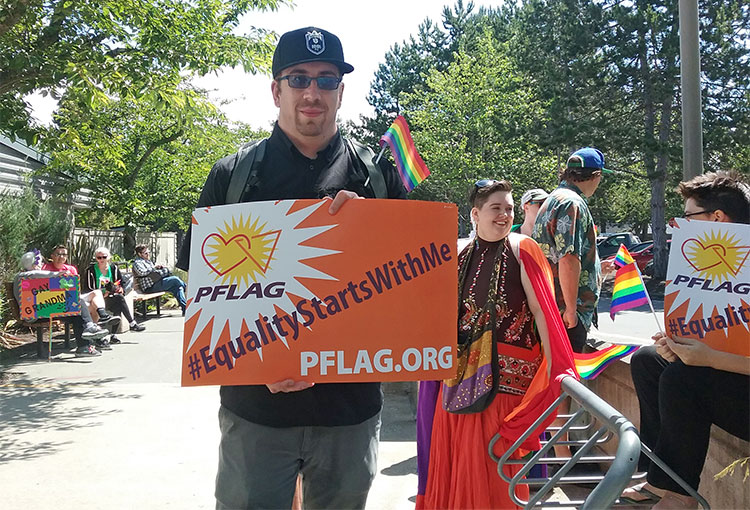 One of PFLAG’s slick signs. 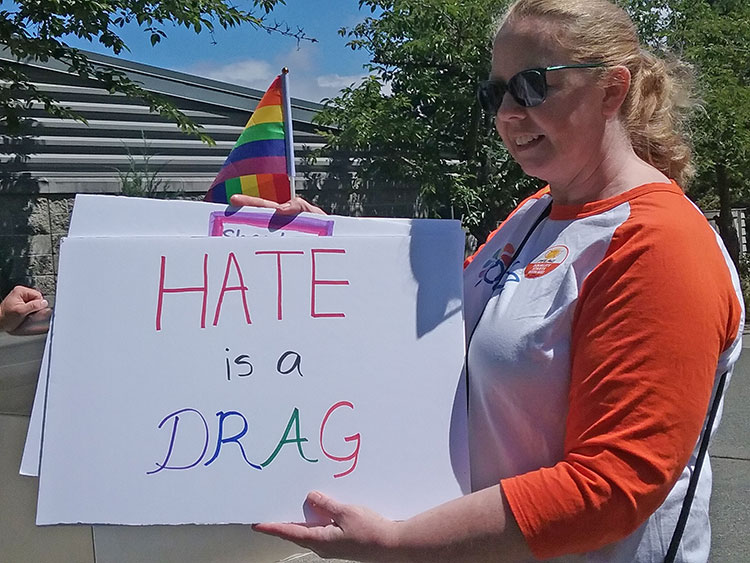 Yawn!
As we all know, LGBT activists can be very nasty people, especially when it comes opposition to their programs with children. A few of them threw eggs at the parents outside the library. 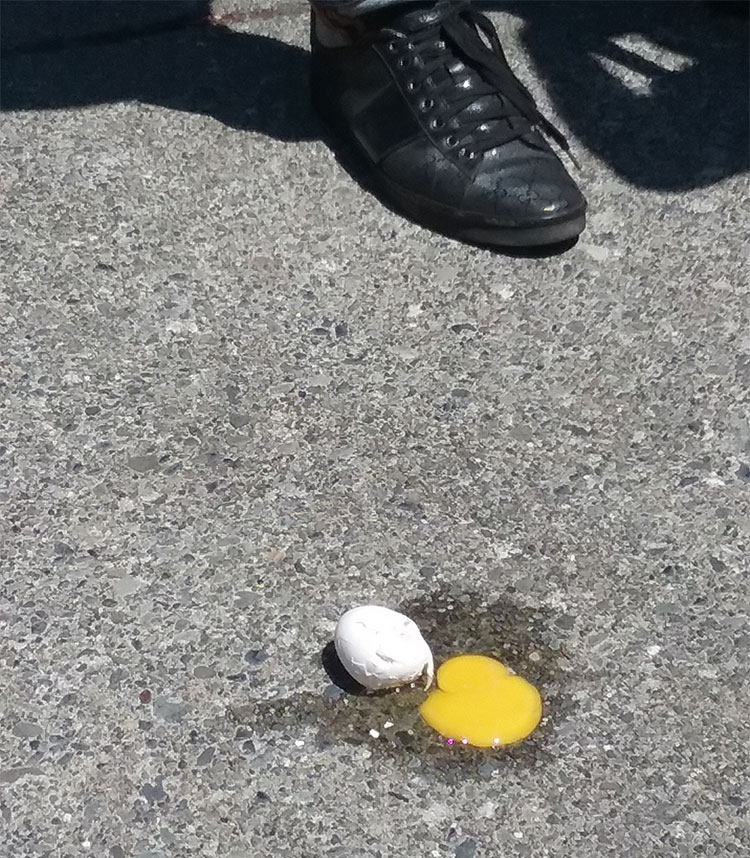 Yes, they actually threw eggs at the pro-family parents!
A lot of local citizens who came to the library that day got the pro-family message. But the library officials refused to cancel the event or even agree to conduct background checks to the “Drag Queens.”

Show of force at the “Drag Queen” event!

Washington MassResistance continued to keep parents organized and informed for the June 17 Drag Queen event. Three activities were planned for that day:

First, there was a barrage of phone calls to the library that day from local parents complaining. That was quite successful.

Second, several parents demonstrated outside the library before and during the event – to make a point to the patrons that day. 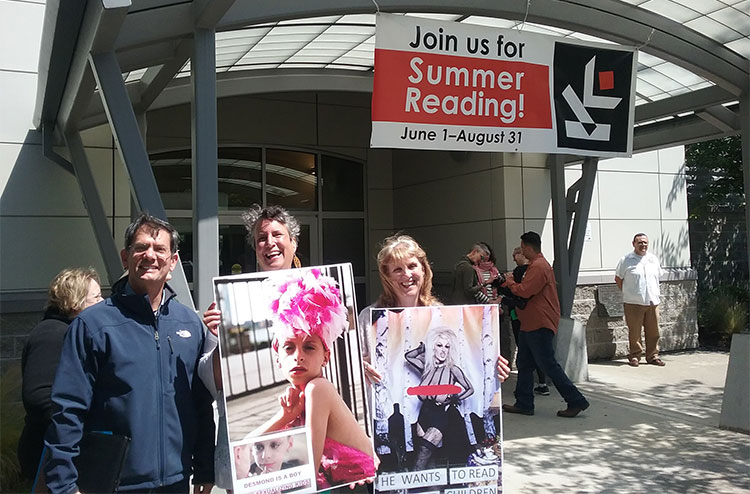 Outside the front door of the library. 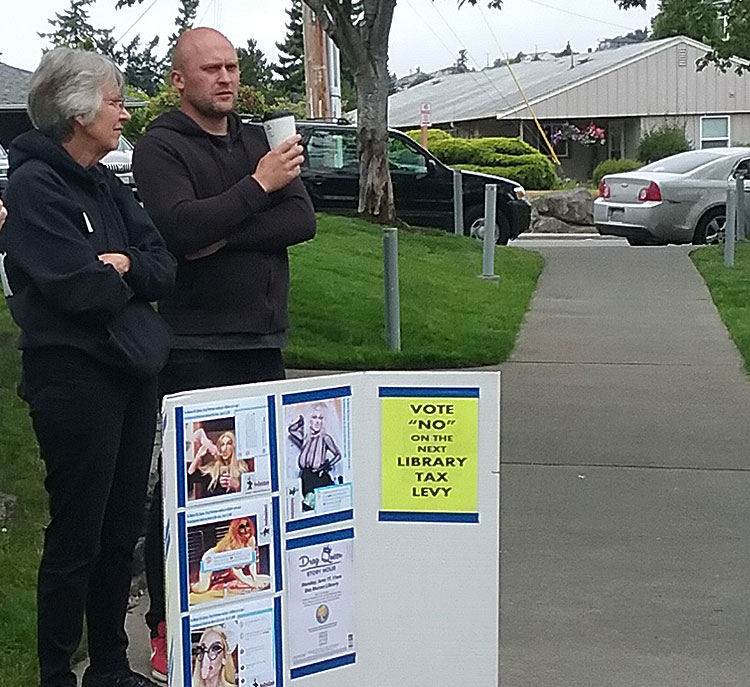 The yellow sign says, “Vote NO on the Next Library Tax Levy.” It’s next to some repulsive photos of the “Drag Queen.” This will surely be an upcoming election issue!
They immediately noticed several police cars pulled up to the library. Apparently, the police had heard there might be trouble. 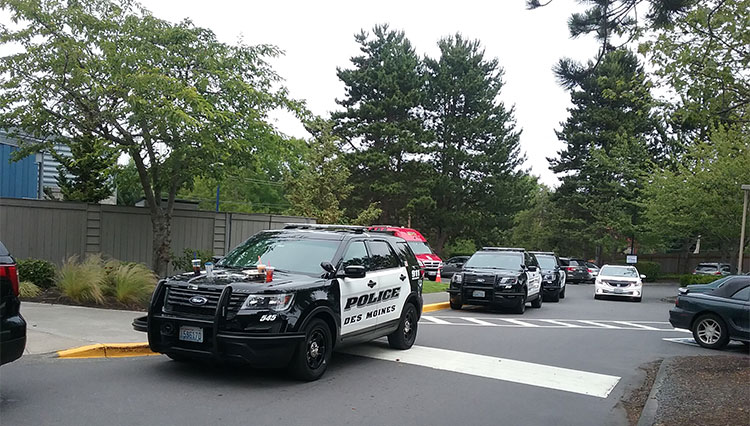 And the police were right. A large group of rabid, clearly angry LGBT activists also gathered outside the library with signs, to support the event and try to intimidate the parents. Many of them were shrieking and shouting. It even included an Antifa group from Seattle. 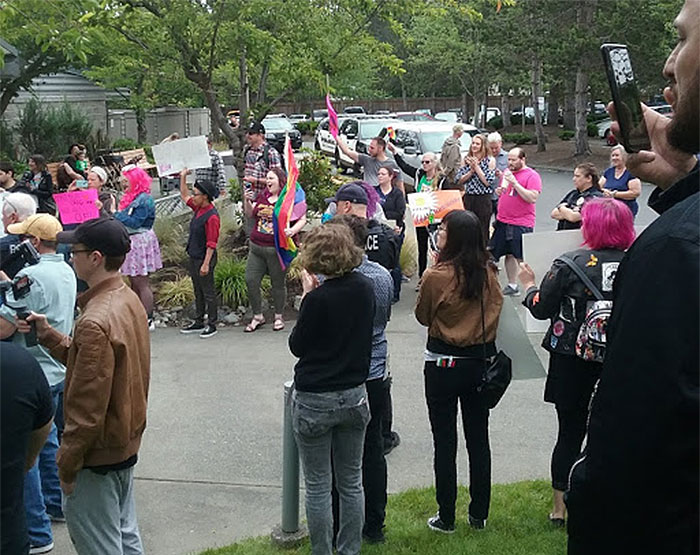 The LGBT crowd filled the area in front of the library, chanting and occasionally shrieking. 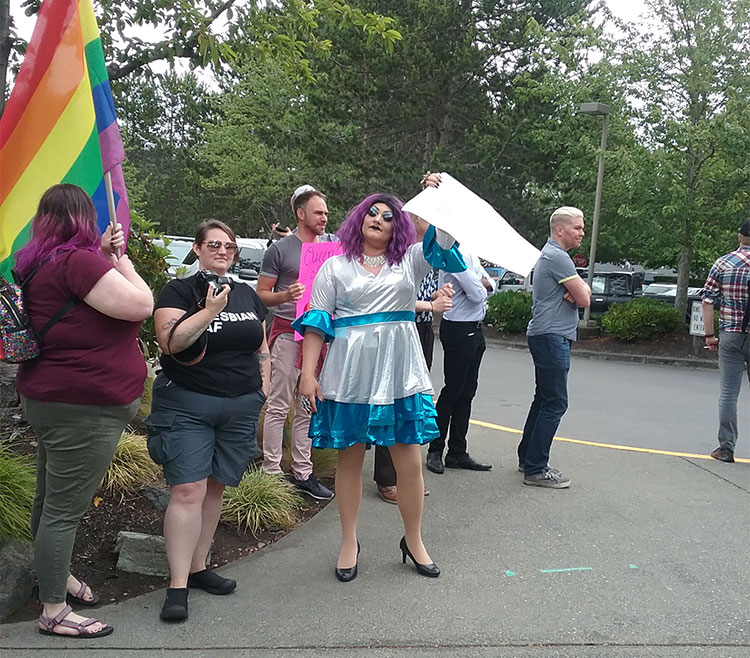 And inside the event – photos and video!

The third part of the plan was for a few parents to get inside the event and take photos and video.

As people walked into the library, copies of the LGBT children’s books that the “Drag Queen” would be reading were prominently displayed. 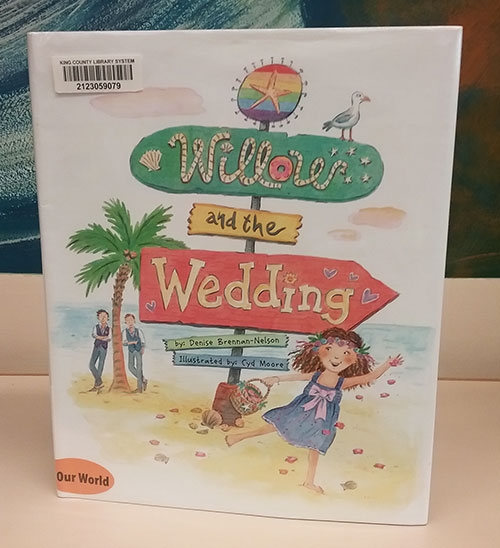 “Willow and the Wedding.” – her favorite uncle and his boyfriend’s wedding. Note the two men standing under the tree. 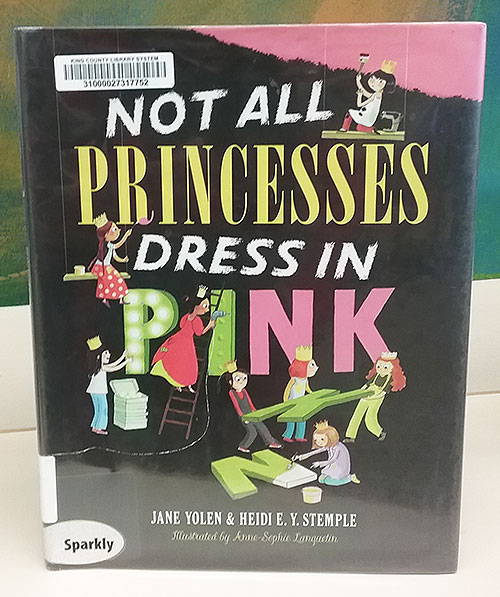 “Not all Princesses Dress in Pink” – obviously a gender-bending theme. The book says that girls want to wear boys’ clothes and play with boys’ toys. 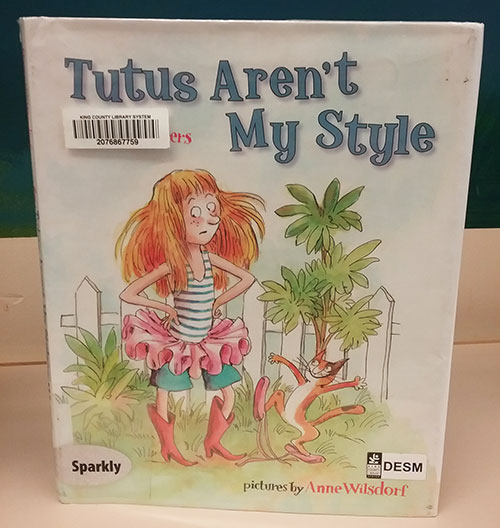 “Tutus Aren’t My Style” – another gender bending theme for young children. A girl decides to make her own rules about how to be a ballerina.

The Drag Queen event was pretty gut-wrenching to sit through. It was really hard to believe that people would do this to their young children, and that public officials would be putting it on. 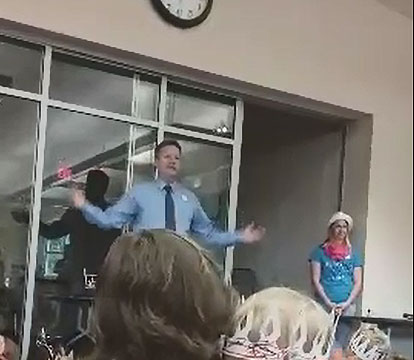 It started with a welcome by an openly homosexual elected county official who said, “I’m proud that our library is a safe and welcoming place for everyone.” 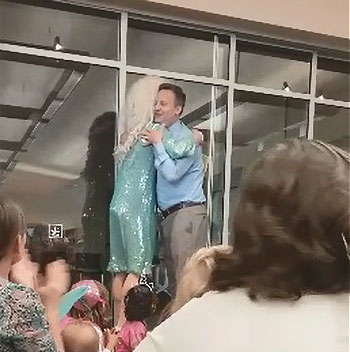 … And then he hugged the drag queen.

The attendees appeared to be mostly pro-LGBT people from other places, who bring their children to these kinds of events. They clearly don’t care that their “Drag Queen” has such a repulsive background – which would easily turn away most parents. This is why so-called “gay parenting” is so frightening to people. 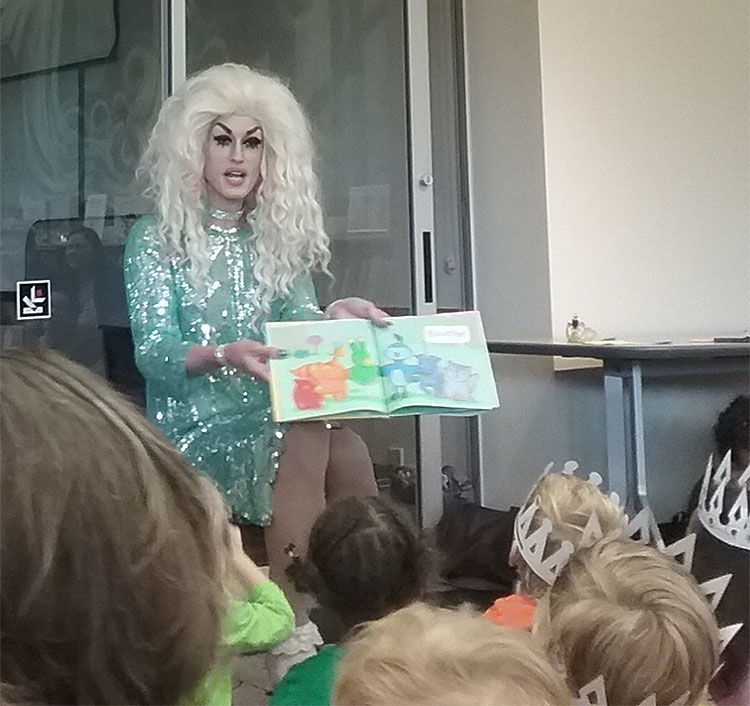 Reading to the kids. Note the kids are wearing crowns to help them get into the idea of imitating drag “queens” or “kings.” 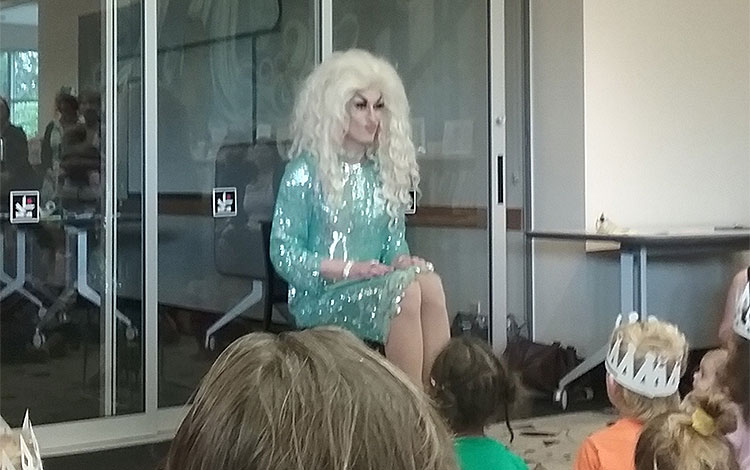 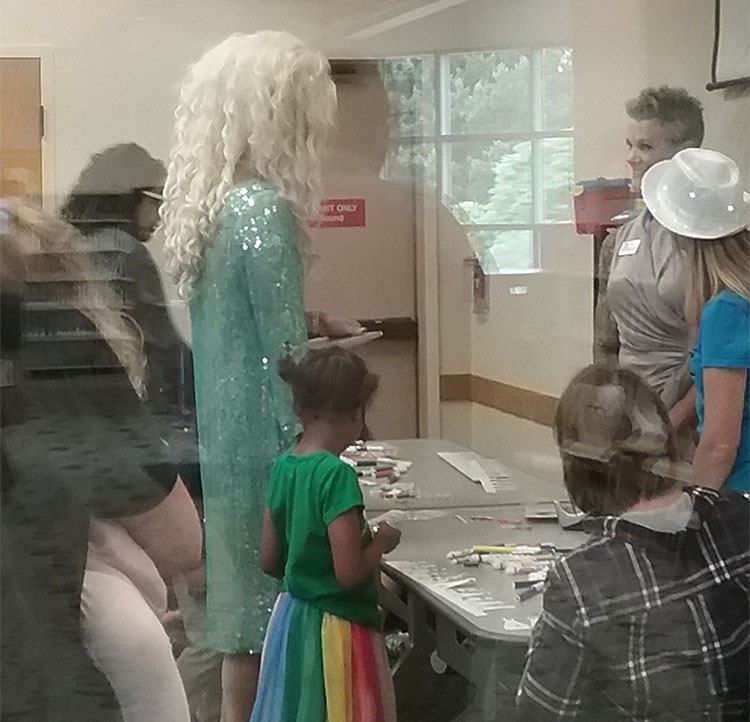 It’s almost a joke how obvious it is that this is a very disturbed man in a dress and a wig. But to the other adults in the room, he’s fine – and they are even pleased to have him near their children!

Indeed it is!  However, thank you Mass Resistance and parents for standing up and declaring this for what it is and for the courage to stand against the lawless criminals attempting to target your children for their depraved lusts.

Doctor: 100% Of All Reported Outcomes Of Injected Mothers Lost Their Babies

Kamala Harris: #1 Democrat Liar In Claim To Be African-American