Home»US»Washington DC: City Demands Grandparents Pay $5,000 In Tickets Racked Up By Thieves Who Stole Their Car
US

Washington DC: City Demands Grandparents Pay $5,000 In Tickets Racked Up By Thieves Who Stole Their Car

Washington D.C. — In one of the worst cases of government incompetence we’ve seen, an elderly couple is being extorted by the city over traffic infractions they didn’t commit. Their car was stolen and used to commit multiple crimes and despite the fact that they have proof in the form of a police report, the city says they are still liable for the crimes committed by the ones who stole their vehicle.

Doug Nelson, 73, is a Vietnam veteran who has never been in trouble with the law before. Last November, after arriving home from his job at the U.S. Postal Service, two thugs came up to him with guns and demanded his car.

“As I was exiting the vehicle, this guy came up with the pistol and said ‘Give me the car. You know, what’s happening. Give me a car,’” said Doug.

Doug immediately gave the criminals his keys and thought that his car was the only thing he was going to lose. He was wrong.

Several days later, police recovered the car and Doug and his wife Nancy Nelson thought that the worst was over. However, after getting back their car, they began getting red light camera tickets in the mail because the criminals who carjacked them went on a dangerous joy ride, racking up over $2,000 in fines. 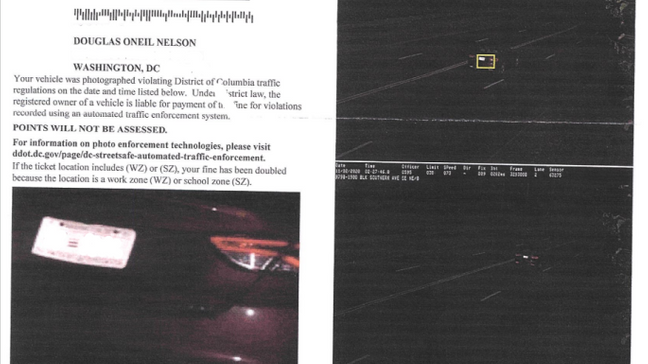 Because red light camera systems remove due process and assume guilt before sending out the citations, the Nelsons were cited before they had a chance to plead their case. But the Nelsons had faith in the system and thought their case seemed simple to fix — they had proof the tickets were issued after their vehicle was stolen so the District of Columbia would dismiss them. Again, they were wrong.

“It came back saying, ‘You owe,’” said Nancy of their request to have the tickets dismissed.

Nancy said she then sent them a police report the second time, proving the car was stolen an hour before the first citation was ever issued.

“I sent it back and it got rejected again,” said Nancy.

Thinking that this could simply be an issue of paperwork getting lost in translation, the Nelsons scheduled an in-person meeting with the hearings officer. But this wouldn’t help either as the bureaucracy is a callous and cruel machine which does not know the meaning of common sense.

“Only for the guy to not even look at the information and say, ‘Your tag number is not on the report,’” said Nancy.

The Nelsons had one last hope to get their situation handled. Since it was police who didn’t put the tag number on the report, they could fix it. So, they went back to the police station one more time.

“He [the police officer] said, ‘I can’t put the tag number on your report, but it’s in the system,’” said Nancy.

They were out of luck. Because the system lacks the ability to apply reason and common sense, the Nelson’s were told they were on the hook for the fines. During this entire ordeal, they were unable to renew their registration because of the unpaid citations and so they’ve been unable to even use the car.

“This is not helping me at all. I’m in tears about all of this stuff because we owe over $2,000 for tickets that are not even our fault,” Nancy explained, noting that the fines are now over $5,000 due to late fees.

As WHAM reports, Nancy and Doug say they expected to be victimized by criminals, but not revictimized by D.C. government. And this is exactly what’s happening.

Now, the Nelsons are told the only way to rid themselves of the fines is to first pay the $5,000 and this will give them access to a special appeals board to plead their case. But they don’t feel like they should have to pay anything.

Luckily, when local media began asking questions, D.C. officials finally responded and claimed they were going to dismiss the tickets. However, as WHAM reported, as of the airing of the original story, that has yet to happen.

Washington DC: City Demands Grandparents Pay $5,000 In Tickets Racked Up By Thieves Who Stole Their Car