What Are The Connections To President Trump’s Medicaid Block Grant Initiative?

Anti Fed Ed Warriors, you might remember that recently I posted this picture. What was my message? It pertained to the fact that ONE day AFTER signing the USMCA (US-Mexico-Canada Agreement) Implementation Act into ‘law’, that President Trump announced a Medicaid Block Grant Initiative.

1) Warriors, be sure to enlarge the picture below. When you access the source, be sure to read how TN will become ineligible for the Medicaid Block Grants due to NOT expanding the State’s Medicaid system.

(Think about this: will this become a high-jacking method the federal government will use in other States?) I believe so. It forces universal health care. Universal health care that the USMCA brings us via the United Nations and their SDGs (Sustainable Development Goals). Good Health is SDG#3.

(Source) for the Jan. 30th announcement

2) From 2019 on the ANCOR (American Network of Community Options and Resources) website, a group with lobbyists keeping an eye on the Trump Medicaid Block Grants, this information. Why would you need this?
The mention of the Rhode Island Global Medicaid Waiver. (The Waiver ties back to the Social Security Act, which can also be found in education and the workforce.)

3) From 2018, the National Institutes of Health (part of the U.S. Dept. of Health/Human Services), posted on their US National Library of Medicine page how the HTA (Health Transformation Alliance) was involved in upcoming changes in health care and what we could expect from the Trump Administration.
What’s also extremely important and not to be missed from the NIH’s website post, is that the HTA is a group of 50 major corporations with one goal: making health care streamlined. CCSS Machine member corporations include (not limited to): Amazon  (includes their Pill Pack service), Citibank, CVS, Aetna, Prudential, Kaiser Permanente, Cigna, HCA (Hospital Corps. USA), IBM, JP Morgan Chase & Co., Walgreen, Verizon, Coca-Cola, Lincoln Financial and Ingersoll Rand.

What’s Oscar Care? Is the tech based insurance program connected to not only the Trump family (Ivanka’s brother-in-law, Josh Kushner), but the ObamaCare Marketplace! The Marketplace is still up and running under the Affordable Health Care Act. (*Note: the embedded article shows how Oscar went into private insurance, too.)

4) Forbes, in 2019, reported how Oscar Care was being expanded across the nation, as well as working with Berkshire Hathaway to expand health care into technology even more! 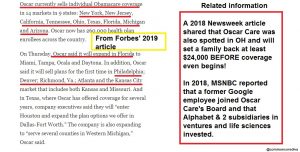 **Warriors, Amazon and Google are named in the supporting USMCA document from US’s International Trade Commission as two of the biggest profiteers off USMCA!**

What Does This Mean And Why Does It Matter?

First, the timing is key.

There’s plenty in the USMCA which will dictate how healthcare is conducted in the US. For starters, North American Union Commissions will set the bar, not US local, state, or federal health care facilities. This will also impact the ‘investment and economy’ portions of health care under insurance companies and policies, data collection and tracking, and, yes, even education.

But ‘how’ in education? After all the proposed block grant initiative is for ‘healthy adults’, not K-12th grade kids, right?! Hang on to that, we’ll get there in the “Show Me” paragraph.

Second, the government is spinning this as a ‘win-win’ for the President’s promise to improve health outcomes. (Warriors, anytime the government utters ‘outcomes’ it’s not a personal case by case healthy happy ending, but an across the board, prescribed set of measures you must meet, along with everyone else. We’ve seen this in education, too.) In an election year, nothing pumps up your campaign than bragging on promises kept.

Third, the government is also spinning this as a savings for the federal government and the States. However, no mention of savings to the taxpayers, who, by the way, are the suppliers of federal funds for the most part. Also caught up in the spin is the managing of drug costs.

Fourth, I found in a CMS (Centers for Medicaid/Medicare Services) document where the nebulous net widened just enough to include children.

Show Me The Education Connections, Please!

Warriors, here’s a visual of the connections: 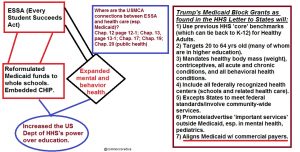 Be sure to enlarge the picture, as I tied the ESSA (Every Student Succeeds Act) to the USMCA and the Trump Block Grants.

The information I displayed can be found in the Jan. 30, 2020 Letter by HHS to the State Directors. It’s a 56-page letter and full of information you need to see. As usual, the federal government is calling it ‘guidance’. However, when you read the print, you don’t see suggestions, you see what the States must do to comply or meet expectations.

More in-depth notes from this letter include Page 3, mention the behavioral health and federally recognized health centers (which are including schools more and more); Page 4 shows the community engagement (gee, ESSA used that, too) and how States must comply with the Transformed Medicaid Stats Information System, T-MSIS; Page 5 show States can ‘choose’ HAO, but consider what The Hill reported about TN; Page 6 shows what the States must implement; Page 7 States are expected to promote (advertise) all important services outside a traditional Medicaid system, especially in mental health and pediatrics; Page 9, drug cost rebates (however, when you consider Medicaid is a huge open entitlement in the first place, not sure how rebates factor in); Page 10 mentions Medicaid cost-sharing, but doesn’t reveal who/what groups, if any; Page 11 is where you’ll find the alignment of Medicaid to commercial payers as well as how healthcare is in the workforce; Page 30 is where you’ll find the Adult Core Set of health measurements (there are 33 in all and behavioral health is among them); Page 38 shows how the National Governors Assoc., the National Conference of State Legislators (also CCSS Machine member organizations) are involved; Appendix A begins on Page 39 and shows the federal ‘ability to impose’; Page 40 shows ‘ability to charge premiums at all levels of income’; Page 41 is where you’ll find the ‘ability to make many program changes without prior CMS approval’; and on Page 44, children and mental health can be found. 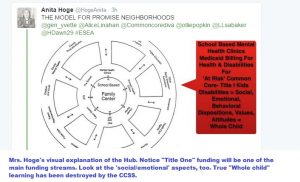 This Becker Hospital Report shows you a handful of States in support of the Medicaid Block Grant program. TN is one of them. TN, because it did not expand Medicaid on a State level, cannot participate in the Trump proposed Initiative.

The 2018 Medicaid Core Set of Measurements where you can find children involved.

The 2020 CMS Medicaid figures and where you’ll find the government spin jobs on savings and promises kept.
(71.3 billion enrolled and includes CHIP (Child Health Insurance Program) at a cost of $600 billion)

The 2020 article showing Oscar and Cigna teaming up.

Centene (the largest Medicaid provider in the USA) and Oscar can be tied together in this 2017 article. Centene has been in the process of lobbying Congress to expand Medicaid.

Warriors, it may be an election year. It may also be a real possibility that Josh Kushner’s co-owned company Oscar, could reap data and/or financial gain from the Trump Medicaid Block Grants. We know that the DeVos family has reaped data/financial gain from the citizens of America, so it’s not a new practice in this Administration or previous ones.

One thing is for certain, in spite of all this. We the People are NOT being served by what’s best for us when Congress has been by-passed so far in this Presidential Initiative. With all the foundation laid to intersect health care and education, this is certainly an issue to watch. I’ve included all my archives on Medicaid and education for you, here.

What Are The Connections To President Trump’s Medicaid Block Grant Initiative?